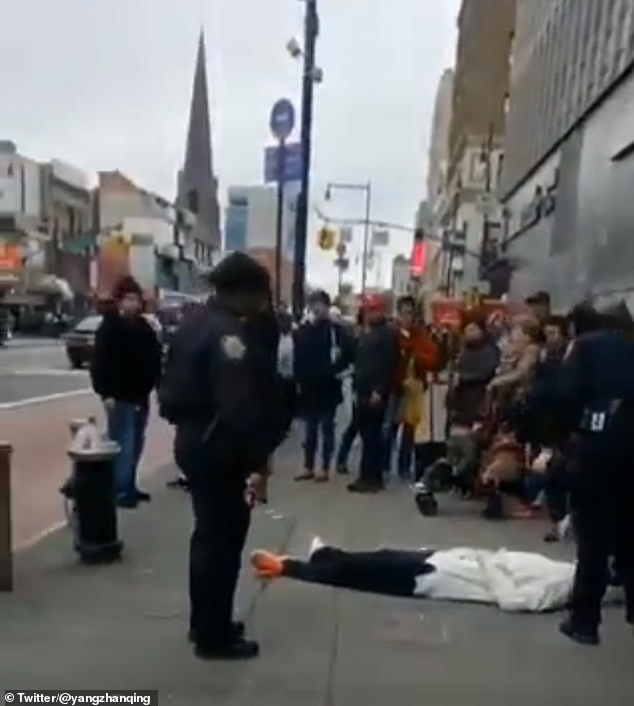 An alarming video showing a man in a medical mask passed out on the sidewalk in the Queens borough of New York City has raised concerns that the incident might be connected to coronavirus.

NYPD officers responded to the Flushing neighborhood at 1.28pm on Tuesday, after the 25-year-old man apparently fainted on Main Street and hit his head on the sidewalk, a police source told DailyMail.com.

Paramedics rushed the man to NewYork-Presbyterian Queens hospital. The source said the man was expected to survive but had no other information about his symptoms or condition.

A spokesperson for the hospital did not immediately respond to a phone message from DailyMail.com late on Tuesday.

So far, New York state has reported two confirmed cases of coronavirus. One is a female medical worker in Manhattan who recently returned from Iran.

The other is a man in his 50s who lives in Westchester and works in Manhattan, and apparently contracted the virus locally through community spread.

The video from Queens the scene shows the unidentified young man lying on the sidewalk near the intersection of Main Street and Roosevelt Avenue.

The area is well known as one of the largest Chinese ethnic enclaves outside of Asia, and is also a busy transit hub, with stations for the 7 train and the Long Island Railroad.

Police and bystanders crowd around the prone man until paramedics arrive and load him onto a stretcher, the video shows.

‘I don’t know if it is related to the new coronavirus,’ said the person who first posted video of the incident, Twitter user Yang Zhanqing.