(RNS) — Donald Trump’s favorability ratings remained “remarkably stable” throughout 2019, with the Republican base and a core of white evangelical backers firmly backing the president, while a majority of other Americans disapproved of him, a new Public Religion Research Institute survey found.

The PRRI survey, taken weekly over the course of 2019 among 40,357 Americans, showed only brief fluctuations in the president’s favorability ratings, which averaged 41% favorable and 55% unfavorable over the year.

The Republican base remained firmly behind Trump — despite April’s release of the Mueller investigation findings and December’s impeachment vote in the U.S. House — with an average favorability rating of 79%.

White evangelicals gave Trump the highest favorability ratings of any major nonpolitical demographic group — an average of 64%. That rating dipped to a low of 54% in May, roughly corresponding to the release of the Mueller report, and peaked at 72% in September, when a whistleblower released call information between Trump and the president of Ukraine. 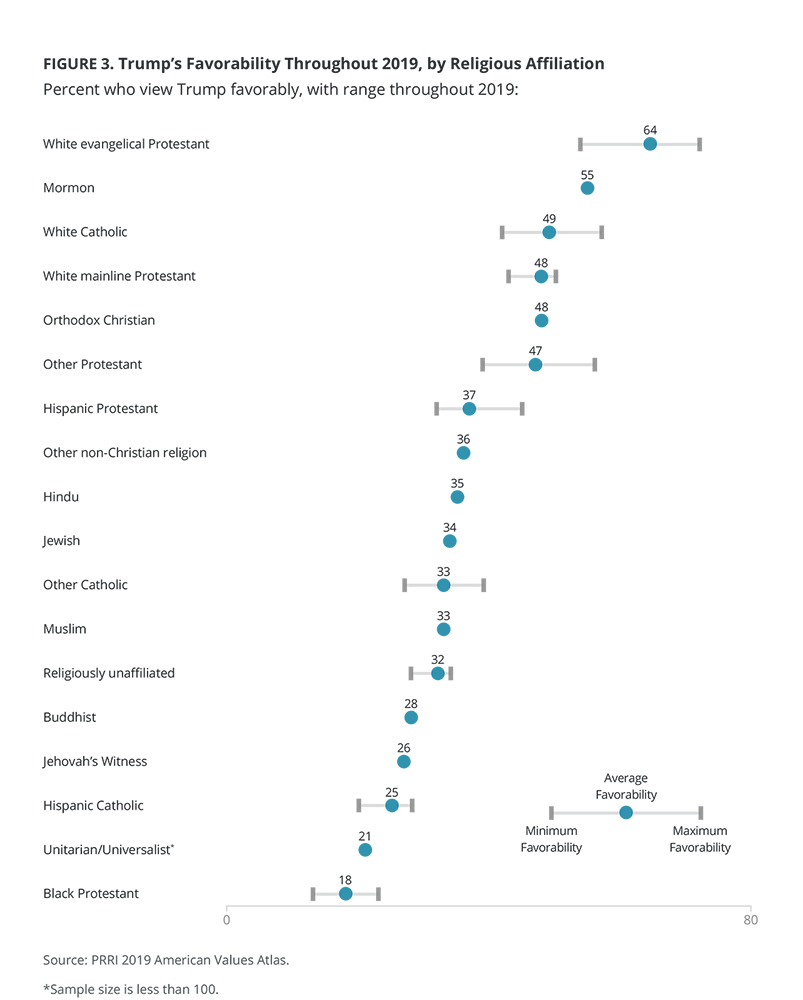 “Trump’s Favorability Throughout 2019, by Religious Affiliation” Graphic courtesy of PRRI

A majority (55%) of Mormons, members of The Church of Jesus Christ of Latter-day Saints, also view Trump favorably. Here too, Mormon men (64%) were much more likely than Mormon women (45%) to say they approved of Trump.

It’s impossible to say if Mormon views changed in the aftermath of Utah Sen. Mitt Romney’s decision to break with the Republican Party and vote to convict Trump on one of the articles of impeachment earlier this month, since the survey was fielded last year.