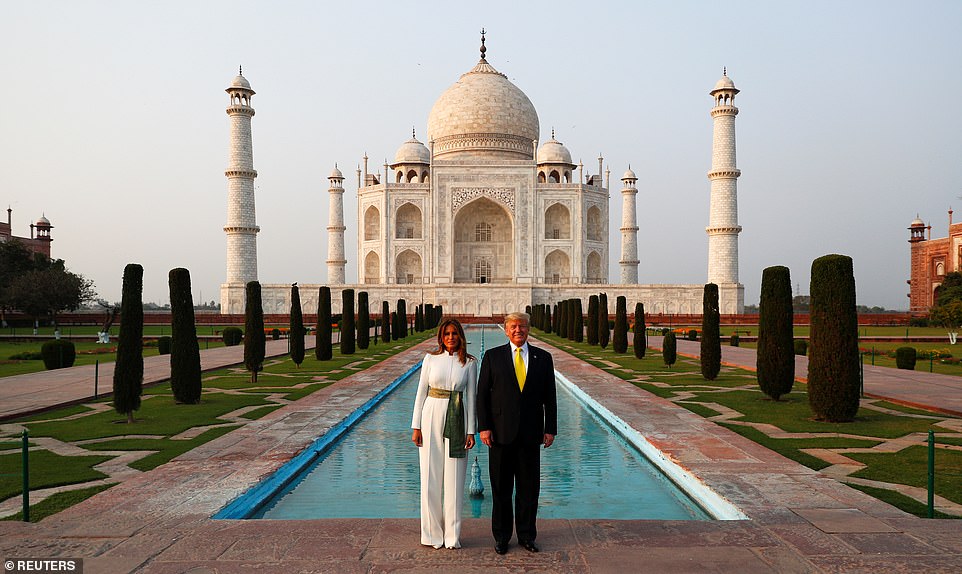 Donald and Melania Trump stopped by the Taj Mahal Monday evening, capping off their first day in India with a sunset visit to the world’s most famous monument to love.

They held hands as they posed for photographers and spent a few minutes staring at the white marble tomb as the sun started to dip below the horizon.

The couple signed the guest book and walked through the gardens as part of their tour of the tomb, built by a 16th century emperor for his deceased wife.

‘Taj Mahal inspires awe, a timeless testament to the rich and diverse beauty of Indian culture! Thank you, India,’ the president wrote in the guest book. Melania Trump signed her name under her husband’s.

It is not the president’s first experience of a Taj Mahal; one of his Atlantic City casinos also held the name and after a checkered history of corporate bankruptcy, was sold to Carl Icahn in 2016, closed, and bought for just $50 million by the Seminole Indian tribe of Florida who have re-opened it as a Hard Rock casino and stripped it of its minarets and dome.

One thing appeared to be missing from the visit to the real Taj: monkeys.

There was no sign of the nearly 1,000 rhesus monkeys who live around the tomb and who sparked fears of a diplomatic incident should they act out. India put extra ‘monkey police’ – guards with sling shots – on duty to keep away the animals. 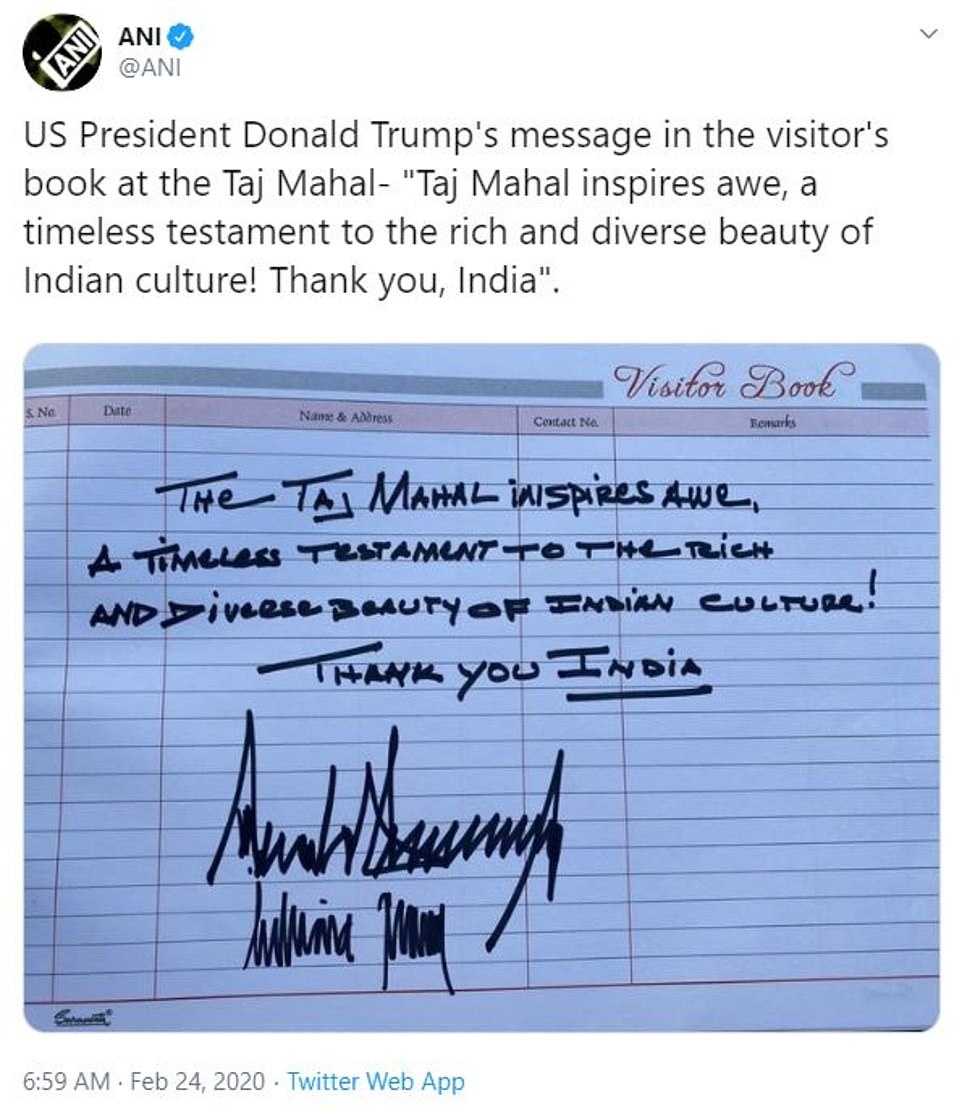 Built by a Mughal Emperor Shah Jahan in 1643, the Taj Mahal is a tomb for his wife Mumtaz Mahal. He built it for his favorite wife after she died giving birth to their 14th child. He is also buried there.

President Trump could have a special interest in the Taj. During his building days in the 1980s, he built the Trump Taj Mahal hotel and casino in Atlantic City. It opened in 1990 and cost nearly $1 billion to construct.

It came to closing in 2014 as its parent company went through bankruptcy, but ultimately remained open under the new ownership. It was sold again in October 2016 to the Hard Rock Cafe and reopened under that name.

The Trumps were given a framed photo of themselves in front of the monument when they returned to Air Force One to leave Agra for New Delhi, where they will spend the night.

The sunset trip to India’s most famous location came after the Trumps’ spent the day with Narendra Modi in his home state of Ahmedabad, where the president and prime minister got a raucous welcome when they entered the world’s largest cricket stadium.

The day gave the president the kind of pageantry and adoration he likes to see.

The 110,000 stadium was filled to capacity and Trump acknowledged the spectacle when he addressed the Indian people.

‘America loves India. America respects India. And America will always be faithful and loyal friends to the Indian people,’ the president said to cheers.

‘You have done a great honor to the American people. Melania, my family, we will always remember this remarkable hospitality,’ he said.

He later told reporters it was a ‘fantastic event.’

‘I thought it was fantastic,’ he said on his way to Agra to visit the Taj Mahal. ‘They worked really hard.’

President Trump received the welcome he wanted when he touched down in India Monday morning – a spectacle of Indians lining the streets cheering on his motorcade, guards on camels standing by, and native dancers in bright costumes moving to live music and the beat of the drum.

Modi designed the day to appeal to an audience of one: Trump, wooing the president as the two nations struggle to end a trade war that has damped relations between them.

President Trump, for his part, hugged Modi upon his arrival in the country in a rare display of affection that spoke volumes for his fondness for the prime minister.

Their three hours on the ground in Modi’s home state of Ahmedabad brought out thousands of cheering Indians, but not the millions Trump predicted would come out to greet him. Officials estimated about 100,000 people lined the 14-mile route the Trumps took through the city.

The Trumps were headed to the Taj Mahal after their time in Ahmedabad.

In their first stop in India, President Trump and Melania joined Modi for a visit to the home of Mohandas Gandhi, where the president donned a prayer shawl and removed his shoes to learn about the life of the famed independence leader.

Then it was on to the main event – the massive rally Modi had promised Trump, held at the biggest cricket stadium in the world.

Trump, who loves a large crowd, added on to the 110,000 capacity size when he thanked the crowd for its warm welcome.

‘To the hundreds of thousands of everyday citizens who come out and line the streets in a stunning display of Indian culture and kindness, and to the 125,000 people in this great stadium today, thank you for the spectacular welcome,’ he said.

But the sections of the stadium facing the sun emptied out as the leaders wrapped up their remarks. The day was hot and baking.

In his remarks at the stadium, Trump praised Modi’s leadership of the country.

‘India will soon be the home of the biggest middle class anywhere in the world, and within less than ten years, extreme poverty in your country is projected to completely disappear,’ Trump said.

He stumbled over Indian names, including over one of their spiritual gurus and famous cricket player Sachin Tendulkar.

The president also hit upon some of the talking points he uses in his campaign rallies, touting the strong U.S. economy, advocating for stronger border control, and bragging about the killing of Iranian General Qasem Soleimani.

‘Every nation has the right to secure and patrol borders,’ Trump said.

He also discussed relations with Pakistan, India’s neighbor and rival, and said the U.S. was working with them to fight terrorism.

The president also mentioned the trade war that has aggravated relations between Delhi and Washington.

Trade talks are at the top of the agenda even as American officials down played expectations a deal would be reached during Trump’s two-days on the ground.

‘Modi and I will discuss the efforts to expand the economic ties,’ President Trump said. ‘We will be making very very major, the biggest ever trade deals.’

‘I am optimistic that working together the prime minister can reach a fantastic deal that would be good – even great – for both countries,’ he noted and then added: ‘Except he’s a very tough negotiator.’

Modi rallied the crowd by calling out ‘Namaste Trump.’

He praised the U.S.-Indian friendship, saying ‘new history is being created.’

‘Welcome all of you to the world’s biggest democracy,’ Modi said, telling Trump all of India welcomed him, adding that U.S. India relationships are ‘no longer just another partnership.’

The rally was designed to appeal to Trump’s love of big events, a crowd of thousands cheering him on as he and first lady Melania Trump came in.

Modi lavished on the praise to the president and his entire family, calling out the accomplishments of Melania Trump, Ivanka Trump and Jared Kushner. He even mentioned the first lady’s ‘Be Best’ campaign by name and praised the work she has done with children.

Trump has touted his friendship with Modi and he hugged the prime minister when he touched down in India, a rare display of affection.

Indian officials rolled out the red carpet for the Trumps and have dubbed the visit as ‘two dynamic personalities, one momentous occasion.’

Modi was on hand to greet the first couple as they stepped off Air Force One as were an array of dancers in colorful native costumes, who gave a festive start to the visit.

They danced alongside the red carpet amid live music as the prime minister led the Trumps to their car.

Melania Trump wore white pants with a long-sleeved white shirt and green sash around her waist for the arrival. 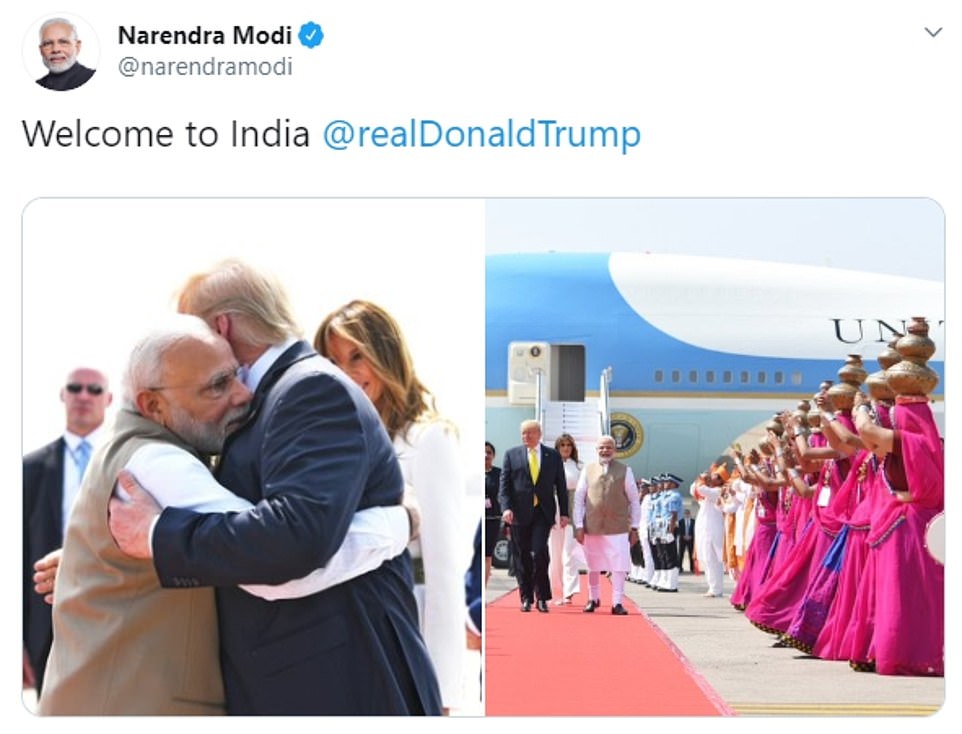 Ivanka Trump and Jared Kushner, who serve as White House advisers, were also on the trip and watched the arrival festivities from the sidelines.

And the president showed his enthusiasm for the state visit, sending a tweet from Air Force One in Hindi while he was in route that read: ‘We are ready to come to India, we are on our way, we will be meeting everyone in a few hours.’

Modi and the Trumps first stopped at the home of Mahatma Gandhi, where the president tried his hand at a loom – the same type used by the revered Indian leader.

The Trumps took a tour of the small complex made of a series of small houses. Modi explained to them how to use a charkha, a traditional spinning wheel used by Gandhi.

While the Trumps made their way through the city, thousands filled Motera Stadium – which will be the world’s largest cricket stadium after Trump formally opens it Monday – to greet the president.

The massive rally was dubbed ‘Namaste Trump,’ which translates into ‘Greetings Trump.’

The president loves a big show and has bragged this could be the biggest event India has ever seen with millions in attendance. The stadium, which is still under construction, holds 110,000 although many more Indians are expected to line the 14-mile route Trump will traverse from the airport to the rally site.

And the place will be spick and span for the president.

Workers cleaned the roads and erected billboards welcoming the first couple. And a four-foot wall has been built to hide the nation’s infamous slums, which house more than 2,000 people, from the Trumps’ view.

Modi loyalists and police will line the road side in Ahmedabad – where the Trumps land Monday – to greet the first couple in the kind of pomp and circumstance the president adores – providing a grand lead-up to the world’s largest largest cricket stadium where Trump will hold the biggest rally of his presidential career.

Trump’s campaign rallies average between 10,000 and 20,000 depending on the venue size.

Trump said last week 7 million people in total would be out to welcome him, which would include the 14-mile route from the Ahmedabad airport to Motera Stadium.

‘He told me we’ll have seven million people between the airport and the event,’ Trump said last Tuesday.

It’s unclear how many will actually appear to cheer the president on his route but it is unlikely to be 10 million and may not hit six digits.

Ahmedabad has a population of eight million.

Modi’s government is dropping more than $14 million, according to the Associated Press, to woo President Trump as the two countries are embroiled in a trade war that shows no signs of abating.

That includes four-foot brick wall that has been quickly erected close to the stadium with some saying it is  being built to block the view of a slum area inhabited by more than 2,000 people.

It will shield the President as he arrives at the event.

The stadium, which was built for $100 million, is a perfectly round venue that promises unobstructed views from every angle. It seats 110,000.

When Modi visited the United States last year, he and President Trump attended a ‘Howdy Modi’ rally in Houston that drew a crowd of 50,000 Indian Americans. Trump compared Modi to Elvis Presley at that event.