President Trump, Like President Obama, Slaps Bible-believing Christians in the Face by Nominating Openly Homosexual Man Richard Grenell to Head Prestigious Position in American Government Only to Offset the Enthusiasm on the Democratic Side With Pete Buttigieg and to Curry Favor With Homosexuals – Franklin Graham and Jack Graham Ought to Walk Away Just Like the Attorney General is About to Do

Donald Trump named one of his closest loyalists, ambassador to Germany Rick Grenell, as acting director of national intelligence Wednesday.

‘I am pleased to announce that our highly respected Ambassador to Germany, @RichardGrenell, will become the Acting Director of National Intelligence. Rick has represented our Country exceedingly well and I look forward to working with him,’ Trump tweeted just before he started a rally in Phoenix, Arizona.

It puts a hawkish pro-Trump figure in charge of the intelligence community but may not be a permanent move – Grenell replaces an acting director, Joseph Maguire, and there was no clarity on whether the ambassador would be formally nominated for the role.

Maguire had until March 12 to remain as acting DNI, a role he took when Dan Coats quit as the last permanent leader of the intelligence community.

Trump tweeted that Maguire could have another role in the administration; he had previously been director of the National Counterterrorism Center after a career in the Navy as a SEAL and chief of special operations.

Maguire and the wider intelligence community was thrust to the center of the news agenda by the whistleblower letter which accused Trump of wrongdoing in his relations with Ukraine.

Grenell is eligible to become acting director because he is already on a Senate-confirmed role, having been voted through 56-42, and was sworn in by Mike Pence with his partner Matt Lashey at his side, becoming the highest-ranking gay official in a Republican administration.

Grenell has not worked in the intelligence community before but was also floated as a possible director of national security at the White House, a job which went to Robert O’Brien after the sudden departure of John Bolton.

He has already been outspoken on one intelligence issue, saying there is a need to prevent Huawei having access to 5G cell phone networks in the West. 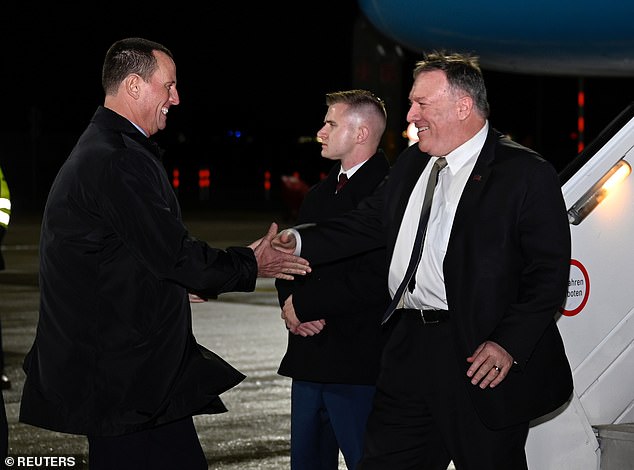 He used Twitter to issue a direct warning to the UK this week that it faces losing access to U.S. intelligence – which he will now control – after prime minister Boris Johnson allowed Huawei to be part of building the country’s 5G network

The move will add a seasoned foreign policy veteran with sharp elbows to Trump´s inner circle.

While Grenell has a reputation for sometimes being abrasive, he has been adamantly loyal to Trump at a time when the president remains skeptical about the intelligence community.

Trump had a strained relationship with Coats, who had endorsed the U.S. intelligence community’s assessment that Russia interfered in the 2016 presidential election with the objective of promoting Trump over his Democratic rival, Hillary Clinton.

Trump also has objected to U.S. intelligence community analyses of major issues – from Iran’s nuclear program to North Korea – that have clashed with his own assessments, tweeting to intelligence chiefs in January 2019 that they should ‘go back to school’ and were ‘naive’ for underestimating the danger from Iran.

Grenell has also led U.S. opposition to Nord Stream 2, a pipeline which was intended to increase the flow of natural gas from Russia to Germany.

The U.S. opposes it on strategic grounds, and has used sanctions to try to derail the project.

And the move comes at a time when the Department of Justice has a prosecutor – John Durham – carrying out a criminal investigation into the origins of the Trump-Russia probe.

The focus of the probe has reported to be on the analysis which led to the conclusion that Russia had interfered in the election in favor of Trump.

It has also apparently focused on the actions of Obama-appointed intelligence officials John Brennan, the CIA director, and James Clapper, the director of national intelligence, who have both been frequent Trump targets and are outspoken public critics of the president.

Grenell has a long history in Republican circles.

He previously served as U.S. spokesman at the United Nations in the George W. Bush administration, including under then-Ambassador John Bolton.

In recent years he has developed friendships with the Trump family and inner circle, particularly with Don Jr., who hosted a ‘farewell’ party for him when he was confirmed as ambassador to Germany.

Others at the party included Bill O’Reilly, the former Fox News host who remains close to Trump despite leaving Fox News amid a scandal over massive payouts to women who accused him of sexual misconduct.