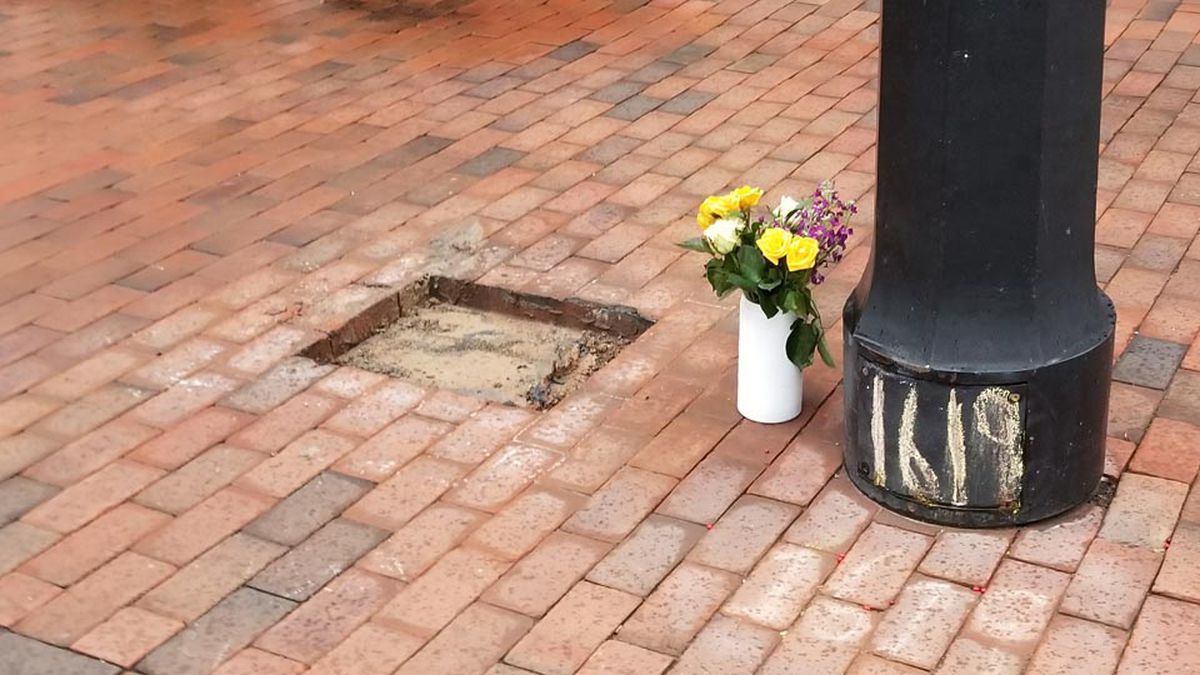 CHARLOTTESVILLE, Va. (AP) — A plaque marking the site of slave auctions was reported missing and vandalism was found nearby in a Virginia city where a deadly white nationalist rally was held in 2017.

An employee with WVIR-TV told police Thursday that one of the two markers in Charlottesville’s Court Square had been removed, the television station reported, and the city confirmed the disappearance in a news release from city spokesman Brian Wheeler.

The marker was built into a sidewalk and had recently been criticized for being illegible, The Daily Progress reported.

A light pole nearby was marked with a “1619,” which was written with what appears to be dirt from beneath the location of the marker, the news release said. The number signifies the first year Africans were brought to Virginia as slaves.

Police said Thursday that it was unclear whether the sidewalk plaque was taken “for protection” or if it was stolen. Another marker on the wall of a nearby building had been damaged and was taken down by its tenants, Wheeler said.

Police said the vandalism was “similar to recent vandalism cases in city-owned parks.” Statues of Confederate generals Thomas “Stonewall” Jackson and Robert E. Lee have been repeatedly vandalized in Charlottesville parks. The Lee statue in particular became a rallying point for white nationalists, including the hundreds who flocked to Charlottesville in August 2017 to protest its planned removal.

James Alex Fields Jr., an avowed white supremacist, admitted deliberately driving his car into counterprotesters who showed up to demonstrate against the white nationalists. Fields was convicted in the death of anti-racism activist Heather Heyer and for injuring dozens more. He was sentenced to life in prison plus 419 years, but court records show he plans to appeal his convictions.

The case stirred racial tensions around the country.

The parks where the statues are located were renamed: Lee Park became Emancipation Park and Jackson Park became Justice Park. The parks were again renamed in 2018 to Market Street Park and Court Square Park, respectively.

A reward of up to $1,000 was offered to anyone with information leading to an arrest in connection with the missing plaque.