Caucus voting began across Iowa Monday night as Democrats balanced their desire for fundamental change with their craving to defeat President Donald Trump in the opening contest of the 2020 presidential primary season.

Nearly a dozen White House contenders were still vying for the chance to take on Trump in November, although Iowa’s first-in-the-nation caucuses were expected to provide some clarity for what has been a muddled nomination fight for much of the last year.

As the evening caucuses opened their doors, there were signs of major enthusiasm. Outside Iowa City’s Englert Theatre, long lines stretched a block in two directions and organizers predicted delays of an hour or longer.

By day’s end, tens of thousands of Democrats were to have gathered at community centers, high school gyms and more than 1,600 other caucus locations in the premiere of more than 50 contests that will unfold over the next five months. The caucuses were rendering the first verdict on what the party stands for in the age of Trump — and who it feels is best positioned to take on the Republican president, whom Democratic voters are desperate to beat this fall.

MORE ON THE IOWA CAUCUSES

One unsurprising development: Trump won the Republican caucus, a largely symbolic victory given that he faced no significant opposition.

For Democrats, the moment was thick with promise for a party that has seized major gains in states since Trump won the White House in 2016. But instead of clear optimism, a cloud of uncertainty and deepening intraparty resentment hung over Monday’s election as the prospect of an unclear result raised fears of a long and divisive primary fight in the months ahead.

“I’m the one who can pull our party together,” Massachusetts Sen. Elizabeth Warren told supporters on a telephone call before voting began, suggesting her rivals could not. They said they were the ones to bring unity.

“If anybody tells you they know who’s going to win, either they’ve got a whisper from God or they’re loony because nobody knows,” said Deidre DeJear, who announced her support for Warren on Monday and was the first black woman to win a statewide primary in Iowa.

Roughly two-thirds of Iowa caucusgoers said supporting a candidate who would fundamentally change how the system in Washington works was important to their vote, according to AP VoteCast, a survey of voters who said they planned to take part in Monday’s Democratic caucuses. 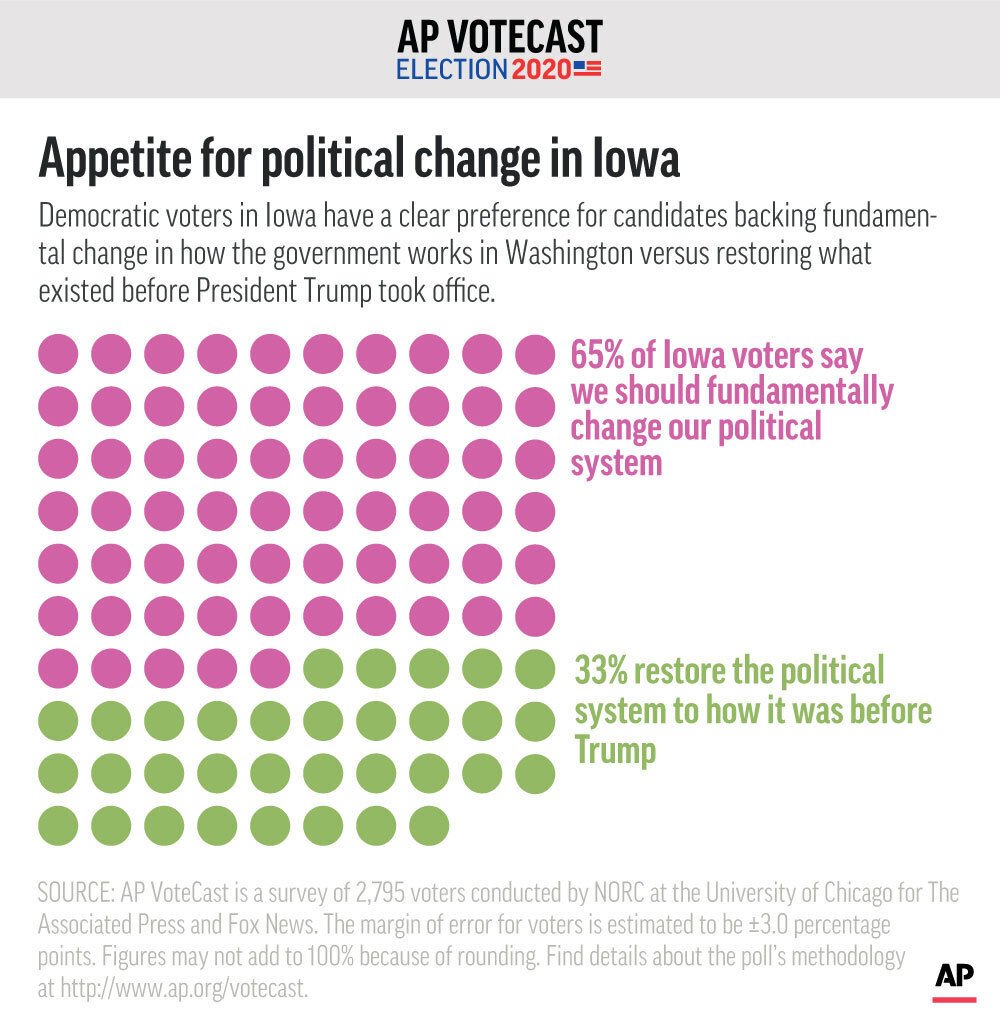 As voters in Iowa decided on a candidate to support, AP VoteCast measured whether change in Washington or a return to the way things were was more important.

That compared to about a third of caucusgoers who said it was more important to support a candidate who would restore the political system to how it was before Trump’s election in 2016.

By midday Monday, a handful of satellite caucuses had already taken place_some thousands of miles away from Iowa. In Glasgow, Scotland, Sanders received the most support from the 19 caucus-goers who attended, while Warren came in second and Buttigieg came in third. No other candidates were viable.

Three senators in the field left Iowa late Sunday to return to the U.S. Capitol for Trump’s impeachment trial, but did what they could to keep their campaigns going from Washington. While Warren held her telephone town hall, Klobuchar’s husband and daughter appeared at a canvass launch in Des Moines.

In suburban Des Moines, Buttigieg delivered about 100 volunteers a last shot of encouragement before they stepped out into the chill to knock on doors for him around midday Monday.

“We are exactly where we need to be to astonish the political world,” he said, igniting cheers for the 38-year-old former midsize-city mayor, who was an asterisk a year ago and is now among the top candidates.

“I feel good,” he said as he walked in, sporting his signature aviator sunglasses.

Iowa offers just a tiny percentage of the delegates needed to win the nomination but plays an outsize role in culling primary fields. A poor showing in Iowa could cause a front-runner’s fundraising to slow and support in later states to dwindle, while a strong result can give a candidate much needed momentum.

The past several Democrats who won the Iowa caucuses went on to clinch the party’s nomination.

The 2020 fight has played out over myriad distractions, particularly congressional Democrats’ push to impeach Trump, which has often overshadowed the primary and effectively pinned several leading candidates to Washington at the pinnacle of the early campaign season.

Meanwhile, ultrabillionaire Mike Bloomberg, the former mayor of New York City, is running a parallel campaign that ignores Iowa as he prepares to pounce on any perceived weaknesses in the field come March.

The amalgam of oddities, including new rules for reporting the already complicated caucus results, was building toward what could be a murky Iowa finale before the race pivots quickly to New Hampshire, which votes just eight days later.

New party rules may give more than one candidate an opportunity to claim victory in Iowa, even if they aren’t the official winner.

For the first time, the Iowa Democratic Party reported three sets of results at the end of the state’s first-in-the-nation caucuses: a tally of caucus-goers’ initial candidate preference; vote totals from the “final alignment” after supporters of lower-ranking candidates were able to make a second choice, and the total number of State Delegate Equivalents each candidate receives.

There is no guarantee that all three will show the same winner.

The Associated Press will declare a winner based on the number of state delegates each candidate wins, which has been the traditional standard.

Many of the Democratic presidential candidates have possible weaknesses when challenging Trump, VoteCast found.

More than 4 in 10 of Iowa’s voters said it would be harder for a woman to unseat the president. Almost 6 in 10 said a gay candidate would have more difficulty defeating Trump, a potential risk for Buttigieg. Roughly the same share said a nominee with “strongly liberal views” would also face a harder time, while close to half said a nominee older than 75 — Biden and Sanders — would have a tougher time versus Trump.