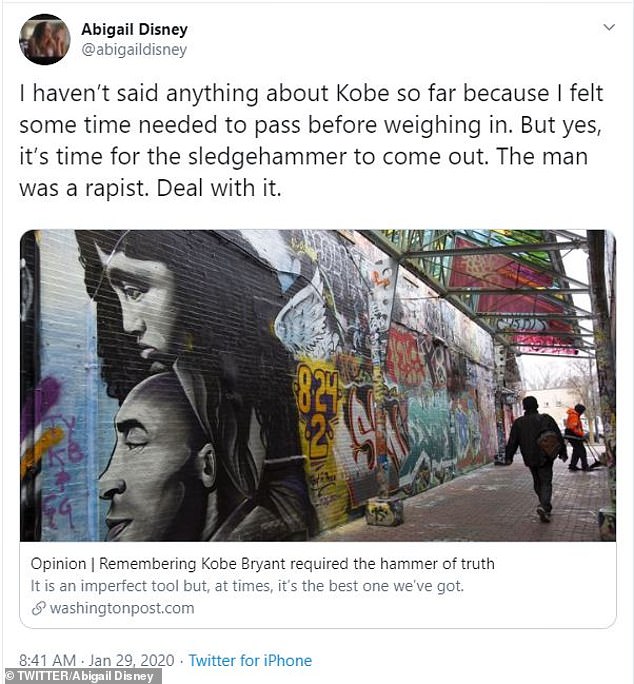 Abigail Disney has weighed in on Kobe Bryant’s controversial past, after actress Evan Rachel Wood and a Washington Post journalist were berated for tweeting about a rape allegation against him from 2003, just hours after his death in a helicopter crash Sunday.

The Emmy-winning documentary filmmaker posted her opinion Wednesday morning, after Wood made her Twitter account private in response to backlash and Felicia Sonmez was reinstated as political reporter following her ‘ill-timed’ tweet that garnered death threats.

Disney – whose grandfather Roy O. Disney co-founded The Walt Disney Company – tweeted: ‘I haven’t said anything about Kobe so far because I felt some time needed to pass before weighing in. But yes, it’s time for the sledgehammer to come out. The man was a rapist. Deal with it.’

Her comments were swiftly met with backlash, with one fan telling Disney: ‘I usually enjoy your tweets & perspective, not this time.’

Another added: ‘You’re what’s wrong in this world.’

Alongside her caption, Disney shared a Washington Post story by journalist David Von Drehle. He suggests that Sonmez shattered the illusion of Bryant’s perfect past, opining that she metaphorically ‘swung a 20-pound sledgehammer’ at Bryant’s hero image.

He calls her Twitter backlash as ‘disgusting as you would expect’ and shares how the decision for her to be suspended was widely ‘denounced inside the newsroom’.

Drehle notes in the article that ‘somewhere a woman was experiencing this outpouring of adulation for a man who choked and lacerated her during an encounter that she called a rape, and which he acknowledged was very much like one’.

Mentioning that Bryant himself ‘admitted that he engaged in rough sex with his accuser, choked her so violently that she had bruises on her jawline and left her with multiple lacerations,’ he added: ‘This woman, and others like her, victimized by other accomplished, admired, even celebrated men, should not be resected from the stories of those men’s lives.’

Drehle’s op-ed ends with him opining the ‘hammer of truth’ is an imperfect tool because it will break hearts. He adds: ‘Still, it’s the best one we have.’