Polarization in American Christianity — and American politics — may be at its highest in recent memory, but experts on the role of faith in public life nevertheless have some hope about ways to address it.

Panelists at a Georgetown University discussion on “Christians in American Public Life” suggested on Thursday (Jan. 23) a few remedies even as they held up recent reaction to a Christianity Today editorial as Exhibit A of the divisiveness in the country as President Trump’s impeachment trial was underway.

“It has been a sadness to me that things have become more frayed over time,” said Melissa Rogers, author of the new book, “Faith in American Public Life.” That book was the focus of the event sponsored by Georgetown’s Berkley Center for Religion, Peace and World Affairs. Washington Post columnist E.J. Dionne, a senior research fellow at the center, served as moderator of the event that drew more than 100 people. 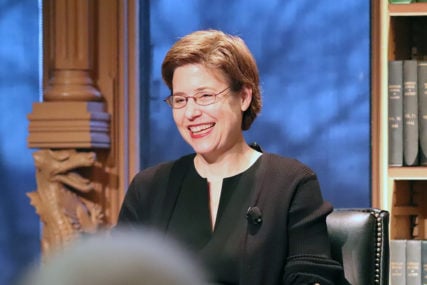 Rogers recalled thinking “the nadir of the religious liberty debate” had been reached during the Clinton administration. But current times have proved her wrong. She said religious differences over LGBTQ and abortion rights have intensified the battles.

“We need to respect everyone and find ways for the rights of religious liberty to co-exist with other key civil and human rights,” said Rogers, former executive director of the White House Office of Faith-based and Neighborhood Partnerships. “That’s the goal. We’ve got to get there.”

Ted Olsen, editorial director of Christianity Today, said reaction to his magazine’s editorial that Trump should be removed from office — published in December right after the president was impeached — filled his email box with a mix of messages.

Olsen said it was “heartbreaking” to hear from readers who were disappointed in Christian leaders who said “character matters” during the Clinton administration but were now saying the opposite. He also cited an email from a conservative Christian concerned about liberals, who wrote: “Who then will save us from the tyranny that will befall us? Jesus? Where is he now when freedom depends on him?”