Roy Belt on It Was Never Illegal to Pray in School 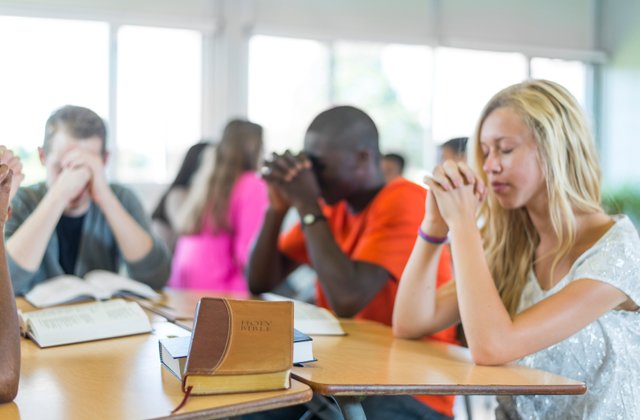 The views expressed in this commentary do not necessarily reflect those of BCNN1.

Meet Nathan, an average, middle school student who lives in a small mid-western town with his parents and two sisters. One night at the dinner table his dad starts a discussion about the importance of prayer. During which he tells Nathan that he needs to pray everyday, even when he’s at school. That’s when Nathan said, “But dad we can’t pray in school; everybody knows that.” His sisters agreed, “Yeah dad, we’re not allowed to pray in school; it’s against the law.”

Unfortunately there are many students across the country that, like Nathan, really believe it is illegal to pray in school, when in fact, nothing could be further from the truth. Prayer has not been outlawed in America’s public schools. Why then is this issue so widely misunderstood? When did our free Country officially ban prayer in public schools? Perhaps we’ll find the answer when we look at the beginning of this controversy and consider each side of the debate.

It all began in 1962 with the Supreme Court case, Engel v. Vitale, in which the Court passed a law that states: “Because of the prohibition of the First Amendment against the enactment of any law respecting an establishment of religion, which is made applicable to the States by the Fourteenth Amendment, state officials may not compose an official state prayer and require that it be recited in the public schools of the State at the beginning of each school day.” (p. 422-436 Miller, para. 4)

Harrison and Stone (1991) wrote, “This decision was a result of a case concerning a school district in New Hyde Park, New York which directed the School’s principal to cause the following prayer to be said aloud by each class in the presence of a teacher at the beginning of each school day: ‘Almighty God, we acknowledge our dependence upon Thee, and we beg Thy blessings upon us, our parents, our teachers and our Country.’ Thus prayers led by, and sanctioned by, school officials were prohibited. This ruling however does not forbid students to pray on their own; the justices merely said that government officials had no business composing a prayer for students to recite.” (p.36)

The government, and the administrators, who run our schools, may not lead children in prayer or force them to pray a certain way. However, all children have the right to pray voluntarily before, during, or after school. In other words, during free time at school, whether it’s lunch, in between classes, or any other time of the day when you are able to talk to your friends you can also talk to God, and you can talk to your friends about God. Not only will the school allow you to pray during these times but you can read your Bible in school as well. In fact, you can find a copy of the Bible in most school and public libraries across the nation.

Justice Abe Fortas (1969) wrote for the U.S. Supreme Court, “It can hardly be argued that either students or teachers shed their constitutional rights to freedom of speech or expression at the schoolhouse door. The Supreme Court has upheld the right of students in public schools to free exercise of religious belief. The Supreme Court rulings on prayer and religious programs in public schools do not prohibit individuals from praying, on their own, during the school day or during school-sponsored extracurricular activities.”

Congress shall make no law respecting an establishment of religion, or prohibiting the free exercise thereof; or abridging the freedom of speech, or of the press; or the right of the people peaceably to assemble, and to petition the government for a redress of grievances. (The first amendment to the United States Constitution, ratified December 15, 1791)