What’s Going on? All 34 Cadets and Three Staff Members at a West Virginia Corrections Academy – Including Instructor Who Likened Herself to Hitler – Are Fired Over Nazi Salute Photo 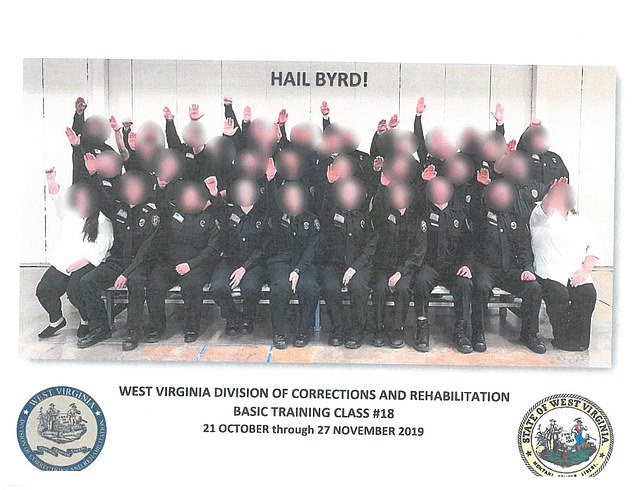 West Virginia Governor Jim Justice on Monday approved the firing of all the prison guard trainees who were seen making a Nazi salute in a class photograph that was made public earlier this month.

In addition to the West Virginia Division of Corrections and Rehabilitation Academy cadets, three staff members are also slated for termination following the release of the official report concerning the incident that has been completed by West Virginia Department of Military Affairs and Public Safety Secretary Jeff Sandy.

Four other academy instructors have been recommended for suspension without pay for failing to report the photo.

‘As I said from the beginning, I condemn the photo of Basic Training Class 18 in the strongest possible terms,’ Justice, a Republican, said in a statement on Monday. ‘I also said that this act needed to result in real consequences – terminations and dismissals. This kind of behavior will not be tolerated on my watch in any agency of State government.

‘We have a lot of good people in our Department of Military Affairs and Public Safety. But this incident was completely unacceptable. Now, we must continue to move forward and work diligently to make sure nothing like this ever happens again.”’

The class photo was released on December 5 in a state memo and shows more than 30 trainees with their arms raised in a Nazi salute and their faces blurred.

The words ‘Hail BYRD’ are in the image, a reference to the group’s instructor.

In a letter to Sandy dated December 27, Division of Corrections and Rehabilitation Commissioner Betsy Jividen wrote that the investigation into the incident has found that ‘with some possible exceptions, participation in the conduct was largely based on ignorance, along with a remarkable and appalling lack of judgment among the cadets, and some members of the Academy staff.’

Jividen explained that the probe, which entailed a total of 75 interviews, uncovered that the hand gesture seen in the class photo started by one of the trainees in the second or third week of the academy session as a sign of respect for Instructor Byrd.

While officials have not revealed the now-fired instructor’s first name, West Virginia Public Broadcasting has obtained an Academy training schedule suggesting that the staffer in question was ‘Ms Karrie Byrd’ who taught, among others things, cultural diversity.