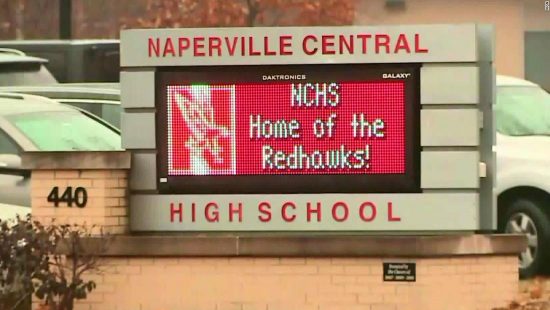 An Illinois teenager has been charged with a hate crime after allegedly posting to Craigslist a “slave for sale” ad picturing a black classmate.

The male teen from the Chicago suburb of Naperville has been charged with two counts of a hate crime, both felonies, and one count of disorderly conduct, a misdemeanor, Naperville police said in a statement. He appeared in juvenile court Wednesday.

The teen, who is a student at Naperville Central High School, is 14 years old, according to the Chicago Tribune.

On Nov. 14, the student allegedly took a photo of a black classmate and posted it online with the caption, “Slave for sale (Naperville).” The post included a racial slur. Naperville police said they began investigating the matter when they learned of it four days after the posting.

“The allegations against the juvenile in this case are beyond disturbing,” DuPage County State’s Attorney Robert B. Berlin said. “Hate crimes have no place in our society and will not be tolerated in DuPage County.”

The Craigslist post is the second recent alleged racist incident in Naperville, a city whose population of about 143,000 is 73 percent white and 5 percent black.

In late October, a black family at a Buffalo Wild Wings in Naperville was asked to move tables when restaurant staff told them a white patron didn’t want to be seated next to black people. A Facebook post on the incident went viral. Buffalo Wild Wings said it fired the service manager and the shift manager working the day of the incident.