A first-of-its-kind survey from the American Jewish Committee finds that 88% of American Jews say anti-Semitism is a problem in the U.S. today and nearly a third report they avoid publicly wearing, carrying or displaying objects or symbols that might help people identify them as Jewish.

The Jewish advocacy organization released the survey Wednesday (Oct. 23) ahead of the anniversary Sunday of the Tree of Life synagogue shooting, in which a gunman spewing anti-Semitic invectives stormed into the building carrying three handguns and an AR-15 and shooting indiscriminately. Eleven Jews were killed.

Conducted Sept. 11 to Oct. 6 among a nationally representative sample of 1,283 Jewish respondents, the survey offers a snapshot of a jittery but not quite panicked American community.

“What stood out is how deep and widespread  the concern is, and how it cuts across different segments of the Jewish community,” said David Harris, CEO of the AJC.

It also found that 72% of American Jews disapprove of President Donald Trump’s handling of the threat of anti-Semitism and assign greater responsibility to the Republican Party than the Democratic Party for the current level of anti-Semitism in the U.S. 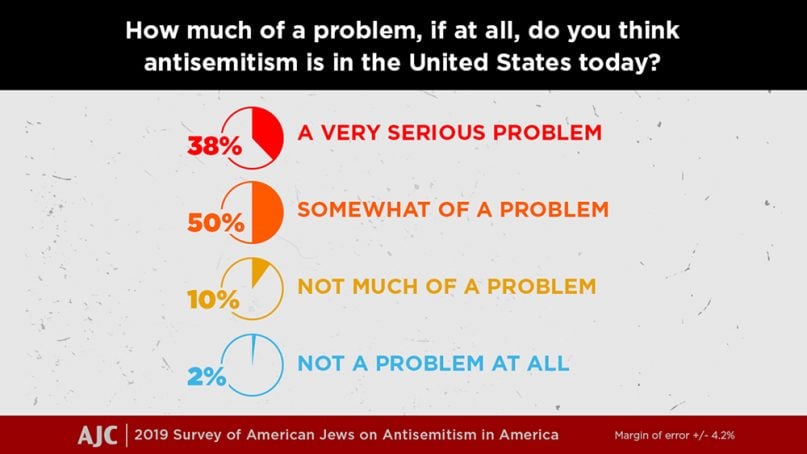 “How much of a problem, if at all, do you think antisemitism is in the United States today?” Graphic courtesy of AJC

This is the first time the AJC has undertaken a survey devoted exclusively to anti-Semitism, so it’s difficult to compare the results.

But Dov Waxman, a political scientist at Northeastern University who has studied annual AJC surveys of American Jewish attitudes, which sometimes feature a question on anti-Semitism, said there’s a significant increase in the number of Jews who consider anti-Semitism to be a problem. In a 2016 AJC survey, only 73% judged it a problem, he said.

“This concern has rocketed to the top of the American Jewish agenda,” said Waxman, a professor of Jewish historical and cultural studies. “It’s becoming the biggest concern for American Jews today.”

The survey found that 31% of Jews avoided wearing symbols or objects identifying them as Jews — presumably yarmulkes and jewelry with the Star of David. Another 25% said they “always,” “frequently” or “sometimes” avoided certain places, events or situations out of concern for their safety — behavior that is typically more common among European Jews than American Jews.

Seventy-one percent of respondents said the Jewish institutions they know have either hired security guards, posted police officers outside or trained members on how to respond to an attack.