Saving the Amazon rainforest requires action by Western nations, a Surinamese bishop attending the Catholic Church’s synod on the Amazon region said, charging that the people of the Amazon cannot do it by themselves.

“Even if we implement all the measures against deforestation or against the polluting of the rivers,” explained Bishop Karel Martinus Choennie of Paramaribo, Suriname’s capital, “it would still not have an effect if (people in) the Western world — Europe, America, Japan and China — don’t change their lifestyles.”

The bishop spoke at a Vatican news conference on Tuesday (Oct. 22) in Rome, where the synod of bishops has been meeting for two weeks. This final and third week, the bishops are considering a draft report with recommendations for the pope that will be put to vote on Saturday.

Choennie’s comments reflect those of many bishops who have spoken during the meeting and blamed Western companies and consumers for the ecological devastation of the Amazon.

A major concern of the bishops is deforestation of the Amazon rainforest, said Choennie. 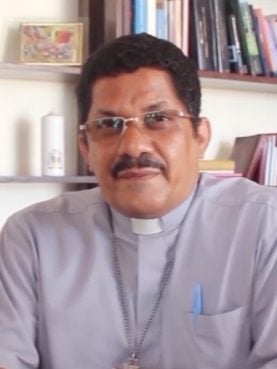 “We are heading on a path of self-destruction,” he said. He notes that “there are scientists who predict that if we increase the deforestation by even 5%, it will have a disastrous and irreversible effect.”

Many people in developed nations do not see themselves as responsible for the rainforest’s destruction, nor do they see the urgency of the problem, the bishop complained. “When they realize it, they are not willing to give up their lifestyle.

“The good living in the Western concept is a luxurious living,” Choennie said. “The forest is disappearing because Europe and China and the rest of the rich world want to eat meat.” The reluctance to adopt a more sober lifestyle and the desire for cheaper meat “will result in greater deforestation,” he explained.

The West “wants the Amazonian people to keep the forest,” said Choennie, “but they don’t want to change their lifestyles, and that is the big contradiction.”

Other bishops have pointed to the West’s appetite for gold, timber and agricultural products as causes of deforestation.

“If global warming continues and if we don’t reach the goals of the Paris agreement, the Amazon forest will disappear,” explained the bishop.