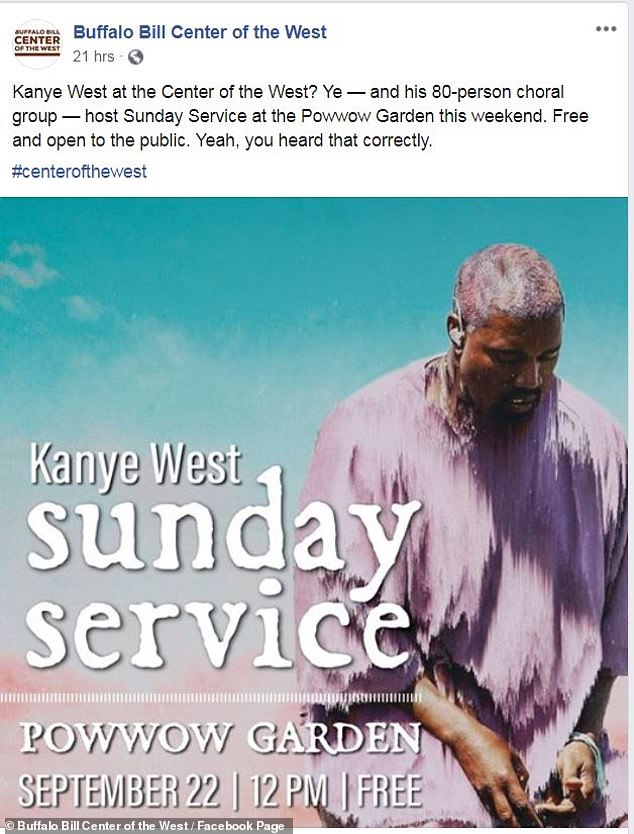 He holds a private and uplifting Sunday Service every weekend in Southern California.

Now Kanye West is bringing the spirited session to Wyoming.

The rapper, 42, will be hosting a free Sunday Service at the Buffalo Bill Center of the West museum this weekend at his new home of Cody, Wyoming.

TMZ reports that West, 42, and his chorus are being advertised on a ‘massive digital billboard’ in the area, as well as on Facebook.

According to a post by the venue, West is planning on bringing a modest ’80-person choral group,’ along with him.

The service will be free, open to the public, and start at 12 p.m. on Sunday, September 22.

TMZ has obtained photos of the event being set up in what looks like the venue’s outside entertainment area, called the ‘Robbie Powwow Garden.’

The photos show a number of large white tents erected in the grass as well as two huge catering trucks parked in the parking lot.

According to the venue’s website, the garden space includes a large outdoor amphitheater with a capacity of 200 seated or 700 people standing ‘reception style.’

It’s impossible to know how many people will show up for the service.

Cody is a relatively small town with a population of only about 10,000 people, but it’s likely fans will travel across the state to see Ye.

Though they’ve typically been more exclusive, reserved only for those who ‘know someone,’ West recently made his Sunday Service gatherings a weekly occurrence, popping up in new locations all around the United States.

He certainly put on a show in Atlanta last weekend, talking and rapping about ‘radical obedience’ to God during a 10 minute sermon while fellow musicians like 2Chainz, Chris Tucker and T.I. made up part of the crowd.

The father-of-four continued his spiel by performing his new hit, Jesus Walks, accompanied by a 600-person choir.

He went on to preach about ‘radical obedience,’ something which he explained was the only thing that the higher power asks of us.

West went on to say he had no doubt in the work of God, seeing how he helped him through his public struggle with mental health.

Yeezy and his wife of five years bought a roomy $14 million ranch in Cody, Wyoming over the summer and Kardashian-West has already spoken about the possibility of living there part time.

The 9,000 acre ranch, named Monster Lake Ranch, is filled with lakes, horse stables and even a restaurant.