Weather permitting, 10 members of a new Southern Baptist church on Cape Cod will be dipping in the ocean this weekend, but it won’t be for a typical swim.

On “Baptism Sunday,” a newly designated day on the Southern Baptist Convention’s calendar, Harbor Church’s baptismal candidates — wearing T-shirts decorated with an anchor and the church’s “Hope for the Journey” tagline over their beachwear — will be immersed by Pastor Josh Adams in the waters of the Atlantic Ocean as a sign of their obedience to God.

“Baptism is a beautiful outward expression of an inward decision that people have made,” said Adams, who started his church in Hyannis, Massachusetts, three years ago. “That opens up the door for hopefully those people sharing their testimony from then on — this is what God’s done in my life and how he’s made a difference.”

But fewer members of the nation’s largest Protestant denomination are availing themselves of the ritual of late. Reported baptisms among Southern Baptists have declined in eight of the last 10 years and dropped by more than 100,000 since 2009, according to the SBC’S Annual Church Profile. 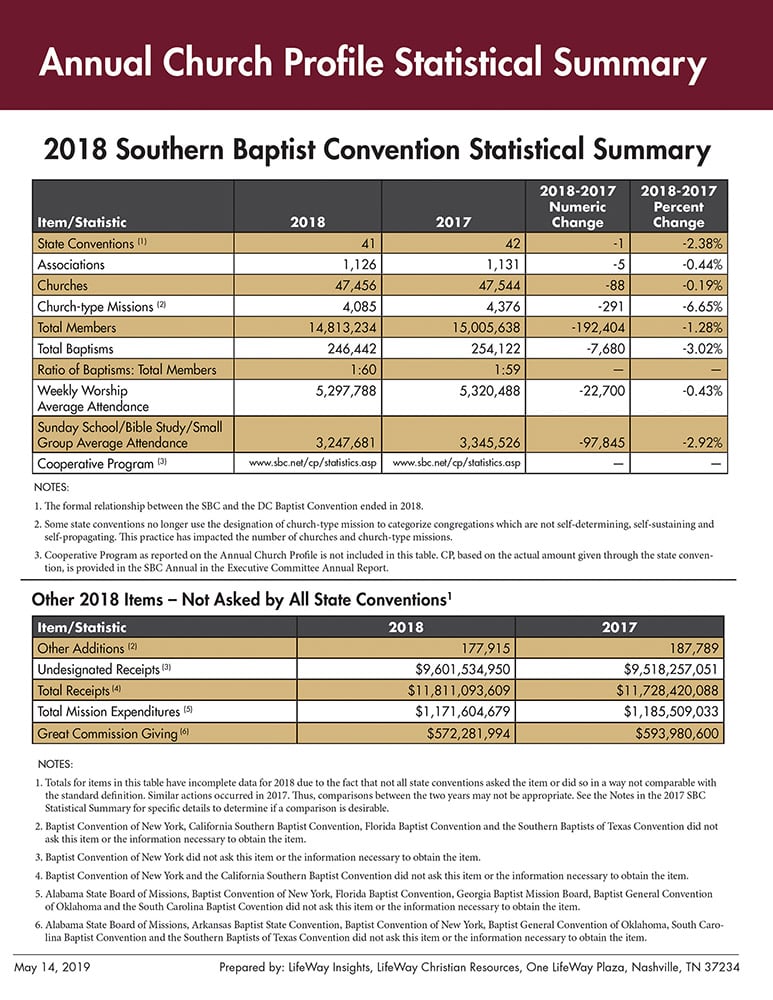 Southern Baptist congregations saw an increase of more than $82 million in overall giving in 2018, according to the latest Annual Church Profile (ACP) report. However, other key metrics declined slightly in 2018, including baptisms, membership, average worship attendance and total number of Southern Baptist churches. The ACP is compiled by LifeWay Christian Resources in cooperation with Baptist state conventions. Graphic courtesy of LifeWay Research

In an August column in Baptist Press, SBC President J.D. Greear responded by urging Southern Baptist pastors to renew their focus on the rite that is, after all, part of many churches’ names.

“Baptism Sunday will be an opportunity for thousands of people in our churches to take their step of obedience and faith,” Greear wrote. “Many of them already know they should be baptized, and you can schedule baptism celebrations in advance. Other people in your churches may decide on Sept. 8th that God is calling them to those same baptismal waters.”

Baptist historian Bill Leonard said that baptism has long been a trademark of Southern Baptist evangelism, but the plummeting numbers have been a source of distress for conservatives who have led the denomination since their resurgence, or takeover, in the late 1970s and 1980s.

“The lengthy declines in those numbers are a serious spiritual, demographic and theological crisis for the denomination, so it is no wonder that Rev. Greear is emphasizing baptism, also as a way of reminding churches that they should reclaim their emphasis on conversion and baptism,” said Leonard, professor of divinity emeritus at Wake Forest University School of Divinity.