There is no glamor to Sharon Shalom’s memories of his evacuation from the Sudanese desert to Israel 35 years ago.

“I had to leave my parents behind in Sudan,” said Shalom, now a rabbi in Tel Aviv, in a phone interview. “The Mossad came in the middle of the night to take us on the trucks. In one small truck, we had 150 people; the mission was very dangerous.” 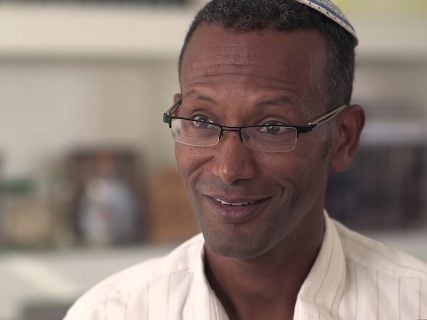 If the Hollywood gloss makes the mission out to be “Ocean’s Eleven” in the Nubian Desert, Shalom, who advised the filmmakers on the events of the rescue, said he’s glad nonetheless to see a little-known journey of faith dramatized for a global audience.

“Some friends here in Israel will argue it doesn’t reflect the exact accurate story,” he said. “The bottom line is, it helps us not to forget what happened, and it starts a conversation.”

The resort of the film’s title refers to the dilapidated holiday retreat that the Mossad purchased as a cover for what they dubbed Operation Brothers. “They had to pass as non-Israeli to help run this fake hotel,” said the movie’s writer and director, Gideon Raff, whose pilot for “Homeland,” Showtime’s espionage series starring Clare Danes, won him a share of two Emmy awards for screenwriting in 2012.

“These were people who had international backgrounds and grew up in other places,” Raff said.

This explains in part why Evans, as the taciturn team leader Ari Levinson, heads a cast that includes British stage actor Alex Hassell and the Ukrainian-accented Mark Ivanir, with the dandified Ben Kingsley as Levinson’s Mossad superior, Ethan Levin.

After Levinson convinces Levin to let him round up his band of unlikely familiars, the disguised agents take up residence at the resort, only to find themselves serving actual tourists who have come for vacation. As their guests sleep, they ferry the Ethiopians in nondescript trucks to Mossad agents waiting in small boats up the coast, who transfer the refugees onto a larger vessel and safety.

The film’s portrayal of the team’s derring-do, shot in South Africa and Namibia, was a test of Director of Photography Roberto Schaefer’s lighting skills. “These operations were always on the darkest Friday of the month, when the moon is really just a sliver,” said Raff. “How do you light a whole desert?” Michael K. Williams (“The Wire”) plays an Ethiopian community leader who serves as the conduit between the Mossad and the refugees, an amalgamation of several covert contacts in the Sudanese camps. Chris Chalk (“Gotham”) plays the villainous Sudanese Colonel Ahmed who tries to frustrate the Israeli plan.

Authenticity was paramount for the filmmakers, who at one point hired a Ugandan C-130 Hercules transport plane actually used in several other refugee rescue missions.

Raff began work on the film by seeking out those who participated in Operation Brothers, and not only the Mossad agents who pulled off the ruse. “I spent a lot of time with the Ethiopians who courageously left their homes and crossed the desert,” he said.

One of those was Shalom, who told Raff his story firsthand as the script was being developed and helped him locate other former refugees.

“It is amazing how Israeli soldiers and Mossad agents answered our letters,” said Shalom, which he said is a testimony to the bonds formed during the high-risk operation. “Suddenly they met brown tribes in Sudan country, we who are Ethiopian Jews. These commandos trained in how to kill people embraced us and began to cry. This happened — and we really are brothers.”