Ryan Burge on Why Evangelicals Continue to Support Trump

In a recent piece from The Atlantic, Peter Wehner tries to answer a question that befuddles reporters, preachers and political commentators alike in recent years.

Why do white evangelicals remain so loyal to President Donald Trump? And why are so many evangelical thought leaders surprised by this loyalty?

Wehner points to a survey showing that seven out of ten white evangelicals approve of Donald Trump’s job performance, despite his personal improprieties and his parade of not so thinly veiled racist statements.

He quotes Ralph Reed, founder of the Faith and Freedom Coalition, saying that evangelicals adore the president: “There has never been anyone who has defended us and who has fought for us, who we have loved more than Donald J. Trump. No one!”

The support for Trump comes with a price, argues Wehner. Evangelicals may have helped win the White House, but their public witness is suffering.

“There’s a very high cost to our politics for celebrating the Trump style, but what is most personally painful to me as a person of the Christian faith is the cost to the Christian witness,” he writes.

President Trump speaks to the Rev. Franklin Graham as they attend a ceremony to honor the late Rev. Billy Graham in the U.S. Capitol rotunda on Feb. 28, 2018, in Washington. (Chip Somodevilla/Pool via AP)

Wehner joins a chorus of other evangelical thought leaders who bemoan the tight relationship between the current occupant of the White House and their follow white evangelicals.

He, like other evangelical elites, have distanced themselves from Trump. Yet most white evangelicals in the pews continue to move closer to the president.

Most evangelical elites live in or close to urban areas. They travel to conferences and speaking events that are also in urban areas, all the while engaging with other evangelicals who, more often than not, are urban.

I suspect this gives them a skewed view of what evangelicals think — at least when it comes to politics.

Evangelicals in urban areas are a decidedly small minority — just one in ten urban dwellers. By contrast, one in four rural dwellers is evangelical. 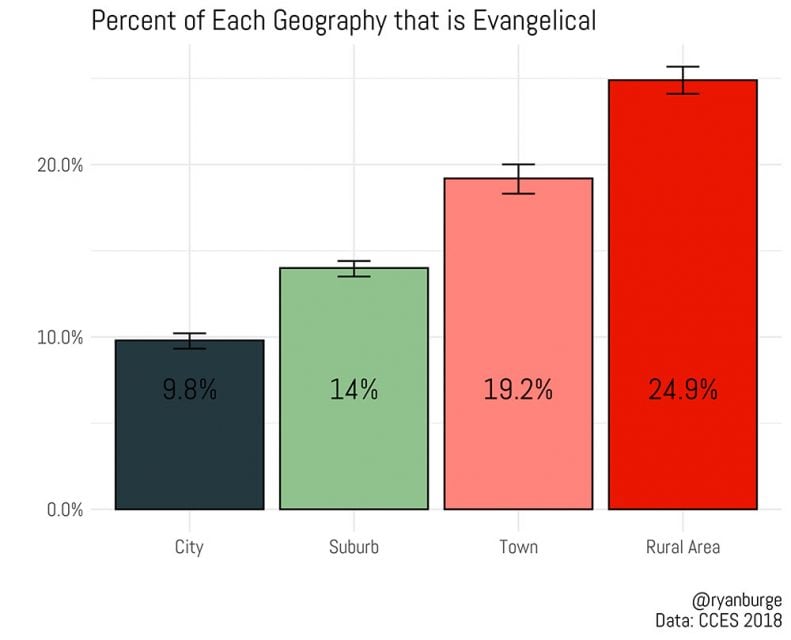 “Percent of Each Geography that is Evangelical” Graphic by Ryan Burge

However, that doesn’t tell the whole story. According to the 2010 Decennial Census, 80.7% of Americans lived in urban areas. Does that 10% of urban white evangelicals translate to a greater total number of evangelicals than those living in rural areas?

“Distribution of Evangelicals Across Geography” Graphic by Ryan Burge

At least, not according to the Cooperative Congressional Election Study.

An analysis of that study found that about a third (34%) of all white evangelicals lives in the suburbs, another third (31%) lives in rural areas, while about a fifth (18%) lives in cities. A similar number lives in small towns.

So, when we think of evangelicals, we must begin to update our perception: a huge and growing block of them is suburban.

And the folks in those churches are among the most devout: 56.3% of them attends church at least once a week. That’s nearly five points higher than rural evangelicals.

White suburban evangelicals are plentiful, and they are active. That’s a potent mix.