A popular gospel sing-along in Tennessee is receiving pushback after a Confederate flag was displayed at the event’s 50th anniversary celebration.

It is yet another example of the symbols of the Confederacy spurring consternation and debate over how the South chooses to reckon with its history of slavery and racism.

Madison Laird, the author of a Bible lesson series, said he is upset that photos and video of a man carrying the divisive Civil War-era battle flag in a recent parade were posted in the Diana Singing Facebook group by someone who attended the event.

Laird said he is heartbroken that the Diana Singing board of directors was slow to take down the images despite his requests. 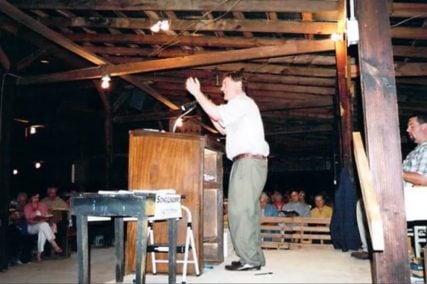 Madison Laird serves as a song leader during a Diana
Singing event. Photo courtesy of Madison Laird,
via USAToday

“I think what the flag represents in the minds of most people is abhorrent to Christian principles,” said Laird, who lives in San Jose, California, but grew up in Nashville.

He has attended the semi-annual Churches of Christ a cappella event for a decade, but because of this incident Laird said he will likely never go back and is planning to strike Diana Singing from the acknowledgements of future print runs of his three Bible Workbook volumes.

A photo at issue shows a man riding a motorized scooter with a flag pole flying the Confederate banner.

Jack Parks, a member of Diana Singing’s board of directors, said the Confederate flag is not associated with the singing. He said the man in the photo is riding in a small impromptu parade of decorated golf carts and ATVs that circled around a fire in the campground. It took place the night before the June 14-15 sing got underway.

“There was really no harmful intent to it,” Parks said Thursday in an interview with The Nashville Tennessean.

Those who participated in and watched the unplanned parade had arrived early to help prepare for the weekend’s 50th anniversary Diana Singing. Parks, who said he did not even notice the Confederate flag at the time, would not share the name of the man on the scooter, but said the man was just one of the people helping out.

“We’d really like to just forget it,” Parks said. “We really don’t want to irritate anybody and there was no particular reason that he had the flag up and it’s not a statement that we’re trying to make or anything.”

To prevent this from happening in the future, Parks said they will tell everyone in attendance at future sings not to do it.

The two-day Christian event typically draws about 3,000 people to the small, rural community of Diana, located about 65 miles south of Nashville. This year’s anniversary event drew a bigger crowd of about 5,000 people.