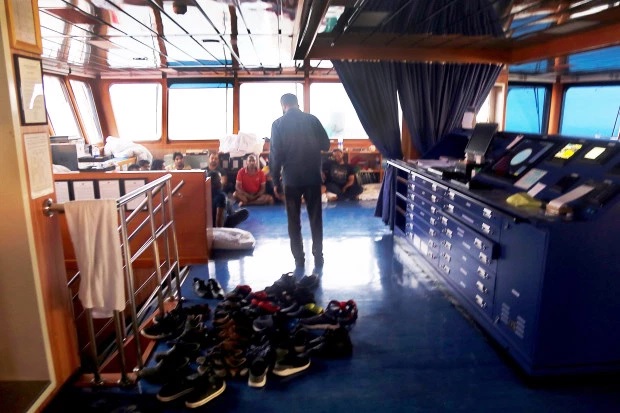 The first picture has emerged from inside the British oil tanker captured on Friday by Iran’s Revolutionary Guard.

The image, taken on board the Stena Impero, shows the terrified crew members currently being held captive in the Persian Gulf.

A pile of shoes can also be seen in the foreground, while what looks like makeshift bedding is scattered around the room.

The picture was taken yesterday and released by Fars News Agency, a news agency with close ties to the Iranian regime.

Other images show an Iranian soldier patrolling one of the ship’s walkways, and the ship seen from a distance down the barrel of a rifle.

Footage from Iranian state media also showed the crew inside the ship, sat round a table talking and seemingly comfortable.

Iran launched a gunboat and helicopter raid on the UK-registered ship last week, claiming the vessel had turned off its tracker and ignored warnings after hitting a fishing boat.

Iran’s Revolutionary Guard later said on the country’s state television that the ship had been boarded for “violating international maritime rules”.

But Stena Bulk, which owns the ship, said it was in “full compliance with all navigation and international regulations”.

The move is widely assumed to have been a retaliation to the British seizure of an Iranian vessel off Gibraltar last week.

The Iranian vessel was suspected of breaching an embargo on oil shipments to Syria, but Iran said at the time it would “not leave such evil deeds unanswered”.

In a letter to the UN Security Council, the UK’s deputy permanent representative Jonathan Allen wrote that the British vessel had been in Omani waters with its transponder switched on when it was approached.

Stena Bulk said Iranian authorities had told them the ship’s crew were in “good health” and being held at Iranian port Bandar Abbas.

But in a further taunt to the Royal Navy, Iran last night hoisted an Iranian flag over the vessel.

Foreign Secretary Jeremy Hunt has called the seizure illegal and said that British shipping “must and will be protected”.