Bridget Kadolph: The Refugee Crisis Broke My Heart, but Refugees Mended It

Bridget Kadolph is a volunteer at Exodus World Service, a refugee agency. The views expressed in this commentary don’t necessarily reflect those of BCNN1.

For most of my life, the word “refugee” meant little to me. I knew its definition but never its gravity. My eyes were opened when I read a harrowing biography about one man’s journey through the Sudanese refugee crisis. Then, in 2015, when pictures of a dead Syrian refugee toddler who had washed ashore made global headlines, my heart broke.

How could our bountiful country close its doors to so many of God’s children who have fled suffering, injustice and war? I knew I had to act. At church that Sunday I signed up to work with Exodus World Service, a nonprofit that mobilizes Christians to serve refugees.

Despite our country’s long humanitarian history of resettling refugees, my decision felt countercultural. We live in a time of rampant xenophobia, when people displaced by war, persecution and disaster have been characterized as criminals and freeloaders.

This narrative has stoked fear in many Americans and spurred our president to reduce our country’s refugee cap to the lowest ever — in 2019, a mere 30,000 will be allowed onto our shores at a time when global resettlement needs have escalated to more than 1.44 million refugees in 2020, doubling from recent years, according to a recent report published by UNHCR, the U.N. refugee agency. 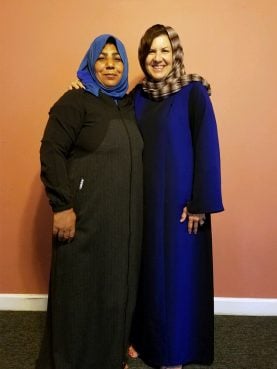 My experiences with refugees in Chicago convinced me that this fear is not just misguided but hurts our society. Equally as important has been walking alongside refugee families. My work has restored and strengthened my Christian faith. It has expanded my worldview and ignited my life with passion and purpose.

The first refugee my husband and I welcomed to the U.S. was Ali, the owner of an engineering construction company in Baghdad who was given a special visa after helping the U.S. Army with its reconstruction efforts. We gave Ali tours of Chicago, took him to dinner and advised him on getting settled in the U.S. He showed us hospitality in return, cooking us a traditional Iraqi meal of savory rice and vegetables served like an upside-down cake.

Over long meals, we shared our lives with each other. This was my first friend from Iraq, a country I knew little about, but it didn’t take long to see the basic human dreams we shared — those for peace, love and family.

I also learned how devastating war had been. Once, over dinner at a restaurant, Ali related a tender memory of making popsicles at his local mosque with his father, which they gave out to the children as a special treat when they were breaking the Ramadan fast. You could see in his face his good memories of his father, a college professor with business savvy. Suddenly overwhelmed with emotion, Ali burst out crying and ran out of the restaurant. He had lost his father, and that absence remained a gaping wound.

The brutal force of Ali’s grief helped me understand how refugees feel about the full lives they have given up to live in exile. They wake up every day faced with the tremendous challenge of learning to live with so much loss.