The Dominican sisters sat in silence, eyes closed, palms upturned, couches and chairs pushed together into a circle in the room at the Dominican Center at Marywood in Grand Rapids, Michigan.

Their reading that evening came not from Scripture, but from poet Mary Oliver: “Though I play at the edges of knowing, / truly I know / our part is not knowing, / but looking, and touching, and loving.”

And the candle flickering in their midst didn’t invoke a saint, but author and activist James Baldwin.

Joining the Catholic women religious in contemplation was a group of young women who aren’t sure they’d describe themselves as religious in any sense.

The Sunday night (July 7) meeting, known as Sisters & Seekers, is one of about a dozen gatherings across the country affiliated with Nuns & Nones, a growing alliance connecting Catholic women religious, most of whom are over 60, with 20- and 30-something millennials, many of whom identify as religious “nones.” 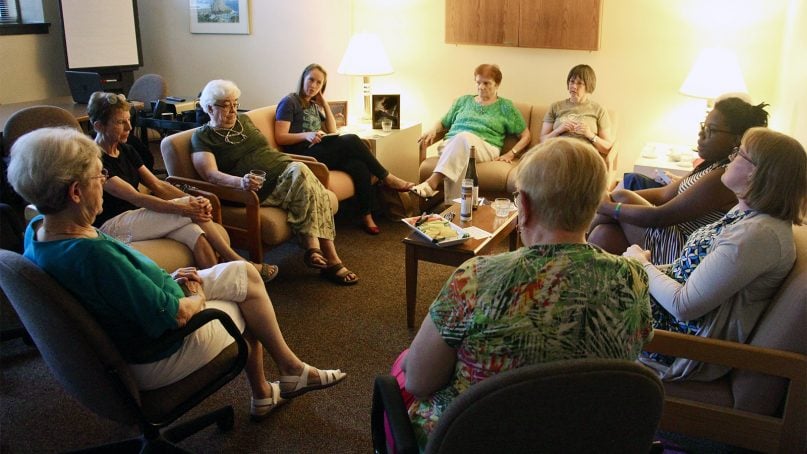 Dominican sisters and millennial women gather for a Sisters & Seekers meeting, affiliated with Nuns & Nones, at the Dominican Center at Marywood in Grand Rapids, Michigan, on July 7, 2019. RNS photo by Emily McFarlan Miller

Katie Gordon, a member of Nuns & Nones’ operational team, described the group as an experiment in what “different sort of forms of what community can look like and what action can look like today.”

“We know that there a much larger moment of reinvention and spiritual life that we’re a part of,” she said.

Both Sisters & Seekers and Nuns & Nones started in 2017 and quickly connected with each other, according to Gordon, who co-founded the Grand Rapids group. Neither had a mission, per se, she said — just a curiosity about what would happen if women religious and millennials came together.

Gordon, who identifies as agnostic, said she first met the Dominican sisters in Grand Rapids through her interfaith organizing work. She’d often see the sisters marching at protests. Then, as she got to know some of the sisters one on one, she began to see the possibilities for building relationships between them and her fellow millennials.

She had been raised Catholic, but she felt that the sisters she met represented a different Catholicism from the one she had known, she said.

“It’s really ironic and also beautiful to be able to engage with the tradition that I was raised in, but in a totally new way,” she said. 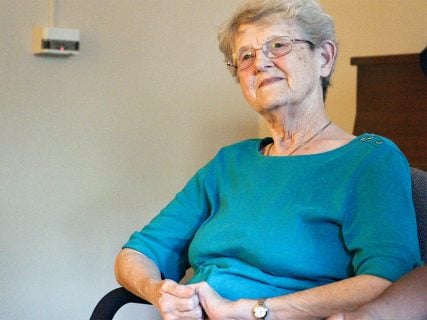 Gordon invited a handful of millennials to those first meetings. Sister Barbara Hansen of the Dominican Sisters, now a sister collaborator with Nuns & Nones, gathered the sisters.

The two groups started meeting together in the evenings for about two hours, usually at the Dominican Center, a brick building sitting on a lush, green campus with a sculpture garden and a sign in the lawn reading, “In this house, we believe: Black lives matter, no human is illegal, science is real, love is love, kindness is everything.”

Meantime, Nones & Nuns was hosting its first gatherings of about 20 people — half sisters, half millennials — for two-day retreats in Cambridge, Mass.

Since then, those gatherings have spread across the country.

A group in Washington, D.C., met for the first time this week and is planning a series of potlucks as members get to know one another this summer. In Burlingame, California, five millennial men and women of different religious backgrounds just completed a six-month pilot residency with the Sisters of Mercy.

While the gatherings may look different, they all revolve around the same question, Gordon said: “What can these two groups learn from each other?”

Gordon believes religious women and millennial women have more in common than might meet the eye. Both are interested in community, in social justice and in asking hard questions about faith and spirituality.