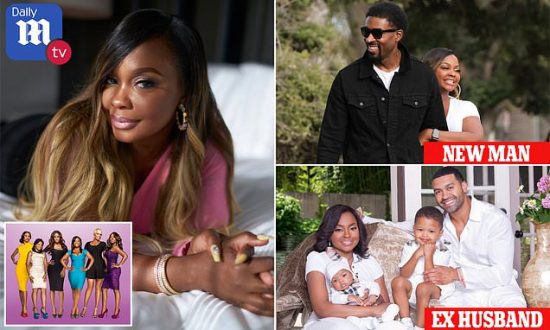 Real Housewives of Atlanta alum Phaedra Parks, 45, (left) has hooked the man of her dreams – a decade younger actor – after moving on from ex Apollo Nida. While Parks is coy about the identity of her new love interest, DailyMailTV can reveal she’s in fact dating actor Medina Islam (top right) who is ten years her junior. Parks said she has found her ‘glow’ with Islam after divorcing Nida in 2017, following his arrest for identify theft and bank fraud. The 40-year-old was released from prison in June and sent back nine days later, much to the disappointment of her two sons Ayden, nine, and Dylan, six (together bottom right). She said: ‘There’s a box of Father’s Day cards they’ve made. My son was like, “so daddy will be here for Father’s Day?”. And I had explained to him, ‘no’. In a wide-ranging two-part interview single mom Parks also opens up about the difficulty of raising her two young sons alone; her disappointment that her ex has messed up again leaving her children devastated; and how her relationship with Nida all came crashing down.