How a Catholic Bishop and Jordan Peterson Became Fellow Travelers

At first glance, Jordan Peterson and the Catholic Church might seem like strange bedfellows. The Canadian psychologist and author of “12 Rules for Life: An Antidote to Chaos” is an existentialist and a materialist who puts his stock in the individual.

His argument that our social hierarchies are actually based in biology has made him a folk hero in some right-wing circles, where his adherents can be spotted by their T-shirts and ties bearing lobsters— whose hard-wired search for dominance, Peterson famously argues, we share.

It’s Peterson’s talent at spreading his ideas, especially among young people, that made him a topic of conversation earlier this month at the United States Conference of Catholic Bishops in Baltimore. The Rev. Robert Barron, an auxiliary bishop of Los Angeles whose Word of Fire Ministries focuses on evangelizing youth, praised Peterson’s effectiveness at using YouTube to connect with the religiously unaffiliated.

But this is not the first time Barron has allied himself with Peterson. Last year, Barron spoke positively about Peterson’s Jungian philosophy as an aid to restoring the Western intellectual tradition in a largely secular age. 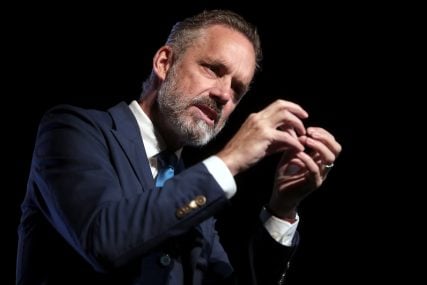 “The Jungian template enables Peterson to interpret many of the classical spiritual texts of Western culture in a fresh way — those very texts so often excoriated by mainstream intellectuals as hopelessly patriarchal, biased and oppressive,” the bishop said in a video on his own You Tube blog.

It’s not only the Western canon that Barron thinks Peterson is saving. “It’s especially valuable for the beleaguered young men in our society,” Barron said, “who need a mentor to tell them to stand up straight and act like heroes.”

Back in March of this year, Barron sat for a two-hour interview with Peterson on the latter’s podcastthat will air later this month.

In the wake of Barron’s most recent comments, some liberal critics were quick to excoriate Barron, warning that Peterson — who has become increasingly popular in conservative circles for his open rejection of “political correction” — is a dangerously politicized figure whose views have been tainted by alt-right ideology. While Peterson has consistently disavowed his alt-right fanbase, it hasn’t stemmed his popularity or kept him from appearing with its most provocative luminaries, such as Milo Yiannopoulos.

But Barron’s willingness to embrace Peterson’s methods and general approach — if not Peterson’s materialist theological perspective — speaks to a wider trend within contemporary Catholic, and indeed Christian, American culture. More and more religious traditionalists are aligning with what might be termed “new atavists”: ostensibly secular opponents of contemporary “liberal” culture, who look to an imagined, mythical past for a glimpse of a better future.