When Amir Benveniste, an ultra-Orthodox Israeli, stepped into the voting booth this week, religious considerations were uppermost in his mind.

“I could not in good conscience vote for a party that would desecrate Shabbat and turn us into a Western country where the working people are forced to work on their holy days while the rich enjoy their vacations,” Benveniste said.

Like many ultra-Orthodox Jews, Benveniste followed his rabbi’s call to vote for the United Torah Judaism party “because ultimately he knows more than I,” he said. “The party will defend Shabbat and prioritize help for the poor, as is required by the Torah.”

While ultra-Orthodox Jews in Israel, known as haredim, comprise just 10 percent of the population, they will continue to exert outsized power as a swing voting bloc after the country’s election Tuesday (April 9).

The vote resulted in a virtual tie between Prime Minister Benjamin Netanyahu’s Likud party and Blue and White, the party led by his most significant challenger, Benny Gantz. Under Israeli law, the party leader who can cobble together a coalition of at least 61 of the Knesset’s 120 seats will lead the next government, pending the president’s approval.

The ultra-Orthodox Shas and United Torah Judaism parties are already in negotiations with Netanyahu, who has served four terms as Israel’s prime minister. 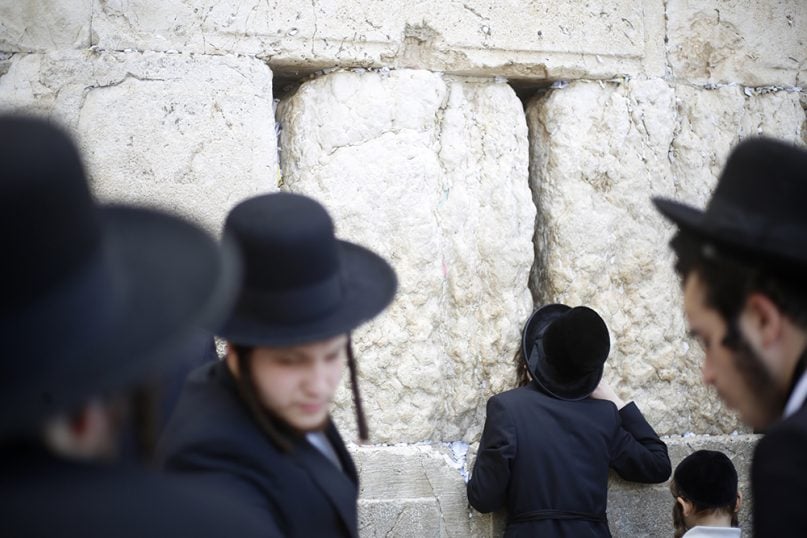 Ultra-Orthodox males pray ahead of the Jewish New Year, Rosh Hashanah, at the Western Wall, the holiest site where Jews can pray in Jerusalem’s Old City, on Sept. 9, 2018. (AP Photo/Ariel Schalit)

While the two haredi parties won only 15-16 Knesset seats total, “it’s not really about the number of seats but about your influence in the coalition,” said Gilad Malach, director of the Ultra-Orthodox Society Program at the Israel Democracy Institute. “In the last government, the parties had only 13 seats but quite a bit of influence.”

The parties are expected to again focus on the many national issues that intersect with Judaism. Other parties can be expected to join a Netanyahu-led coalition with a view to ending hospital overcrowding or annexing West Bank settlements; the haredi parties “will demand higher budgets for their religious institutions, a ban on public construction projects on Shabbat and a conscription exemption,” Malach said.

“We’re likely to see new records in the amount of government funding to haredi religious institutions,” said Uri Regev, president and CEO of the organization Hiddush – Freedom of Religion in Israel. Non-Orthodox institutions in Israel aren’t recognized by the state and receive virtually no government funding.

The military draft is a particularly contentious issue in Israel, where ultra-Orthodox Jews have long been exempted from the country’s mandatory service. All other Jews, as well as male Druze and Circassians, are drafted. Arabs are exempt on security grounds.