A French rapper has been found guilty of incitement to violence and handed a suspended fine over a song called Hang White People.

In Nick Conrad’s music video, the 35-year-old was depicted torturing and murdering a white man and called for Caucasian babies to be killed.

A court has now handed him a suspended €5,000 (£4,280) fine after a trial having been found guilty of incitement to violence.

He was, however, told to pay 1,000 euros (£860) in damages to each of the two anti-racism groups that brought the case forward. 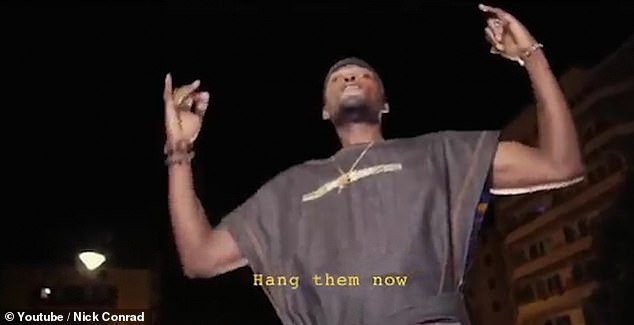 In Nick Conrad’s music video, he was depicted torturing and murdering a white man and called for Caucasian babies to be killed

Conrad, who denies racism towards white people, says he will appeal and has argued the song was a fictional depiction of racism that was not intended to be taken at face value.

His lawyer said after the hearing: ‘The court had a reading of freedom of expression that does not satisfy us.

According to AFP, the court said in its judgement that if ‘the permissible limits of freedom of expression are assessed with greater flexibility’ when it comes to rap, ‘the freedom of artistic creation is, however, not absolute.’

Conrad could have faced up to five years in prison and 45,000 euro (£38,600) in fines under the charges. But prosecutors requested the suspended 5,000 euro fine because he had ‘already to a certain extent paid the consequences’ after losing his hotel receptionist job.

In one scene from ‘PLB’ – short for ‘Pendez Les Blancs’, or ‘Hang Whites’ in English – the little-known rapper and an associate drag their white victim along the pavement and kick him in the head.

The attack appears to be a reference to a famous scene from the film American History X, in which actor Edward Norton plays a neo-Nazi who stomps on the head of a black man as he lies face down on the pavement.