If Donald Trump were the pope or another Christian leader, the majority of U.S. Christians likely wouldn’t have minded that he signed a Bible.

But a Morning Consult poll released Monday (March 18) shows nearly two-thirds (65 percent) of Christians in the U.S. found it inappropriate when Trump signed the covers of at least two Bibles earlier this month at a Southern Baptist church in Alabama while visiting a community recovering from a deadly tornado outbreak. 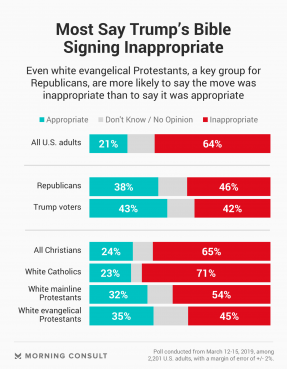 The poll comes after videos posted online showed people holding out their Bibles to the president and first lady Melania Trump to sign. Slate reported that a 12-year-old boy was the first to ask Trump to autograph his Bible. Other photos show the president’s signature scrawled in large writing across the covers of a pair of Bibles.

Two-thirds (64 percent) of all U.S. adults, including non-Christians, view that action as inappropriate, according to Morning Consult.

More white evangelical Protestants in the U.S. — who overwhelmingly voted for Trump in 2016 and continue to largely support the president, according to the same poll — found it inappropriate (45 percent) than appropriate (35 percent).

But Ed Stetzer, executive director of the Billy Graham Center at Wheaton College near Chicago, said signing Bibles is not unheard of in some Baptist circles in the South.

In fact, Stetzer said, he’s been asked to sign many Bibles when he’s appeared as a guest speaker. He generally tries to demur, and he wouldn’t ask someone to sign his Bible, he said, though he also is conscious not to commit a “cultural faux pas” when visiting places where it may be more common.