Sec. Of State Pompeo Says All Faiths Will Have ‘Something to Say’ on Israeli-Palestinian Peace Plan

U.S. Secretary of State Mike Pompeo defended his department’s decision to drop the word “occupation” from its description of the Golan Heights and Palestinian territories and said people of all faiths will have “something to say” about the Israeli-Palestinian peace plan the White House is expected to announce after Israel’s elections in two weeks.

Pompeo’s remarks came Monday (March 18) during a phone briefing with a small group of media outlets as he was leaving for a five-day trip to Beirut, Jerusalem and Kuwait City.

The secretary of state said his trip will include “different missions, different places.”

But in each place, Pompeo said the agenda will be “very focused on not only the security aspects of the relationship between our countries and the economic aspect but also the challenges we face from radical Islamic terrorism in the region and working to promote religious tolerance in each of those places as well.” 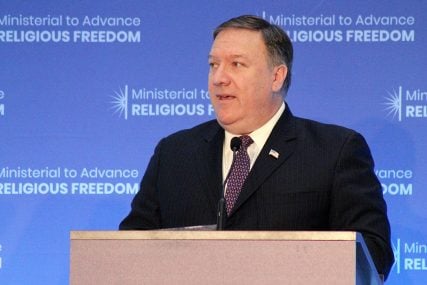 Secretary of State Mike Pompeo at the State Department
in Washington on July 26, 2018. RNS photo by Adelle M.
Banks

The briefing caused controversy after a member of the State Department press corps reportedly was invited to take part in the call and then disinvited after being told the call was limited to “faith-based media.”

While it was not clear which outlets were part of the call, questions were asked by Religion News Service, Jewish Telegraphic Agency, Algemeiner, World Magazine and The Leaven, the newspaper of the Roman Catholic Archdiocese of Kansas City in Kansas. America Magazine also participated in the call. Participants were not told that the call was limited to faith-based media.

Pompeo’s trip comes a week after the State Department released its Country Reports on Human Rights Practices for 2018 with no mention of “occupation” in regards to the Golan Heights and Palestinian territories.

Instead, with the exception of direct quotes, the report referred to the “Israeli-controlled Golan Heights” and “areas under (Israel’s) control.”

That’s a departure from past human rights reports, according to The Jerusalem Post. Last year, the department had described the areas as “occupied” by Israel, it said. And two years ago, the State Department changed the heading from “Israel and The Occupied Territories” to “Israel, Golan Heights, West Bank and Gaza,” it said.

Pompeo said Monday the language in the most recent report “most accurately reflects the facts.”

The human rights report is not a policy document, he said.