Alabaster Co. Designs Books of the Bible for a Visual Generation

When Brian Chung worked as a campus minister at the University of Southern California several years ago, he noticed that many students weren’t interested in the Bible.

Especially for those who had never read it before, the scripture could be intimidating and dense — and at more than 1,000 pages long, they often didn’t know where to start.

“We would give out Bibles to people who were interested, and I remember seeing someone who didn’t grow up Christian open the Bible, flip through the first couple pages and sort of give up,” said Chung, 30. “They put the Bible back into their backpack.” This inspired Chung and his friend Bryan Chung, both artists (and unrelated, despite their nearly identical names), to re-design portions of the Holy Book with original photography and a sleek layout to better appeal to a millennial aesthetic.

Their company, Alabaster — which started as a 2016 Kickstarter campaign that raised more than $60,000 and formally launched in 2018 — now sells seven books of the Bible, created to look like specialty indie magazines such as Kinfolk, Drift and Cereal.

The company has sold 16,000 copies of the books of Matthew, Mark, Luke, John, Romans, Psalms and Proverbs so far and is aiming to produce a version of Genesis later this year.

“We really take in visual media more than any other type of media,” Bryan Chung, 24, said of millennials and Generation Z. “We respond to websites and books based on how they’re designed. Our culture is becoming increasingly visual. We wanted, instead of shying away from that, to think about how we could do that in a faith-based space.”

While Alabaster’s products may be innovative, the concept is nothing new, said Jeffrey Siker, professor of New Testament at Loyola Marymount University in Los Angeles. 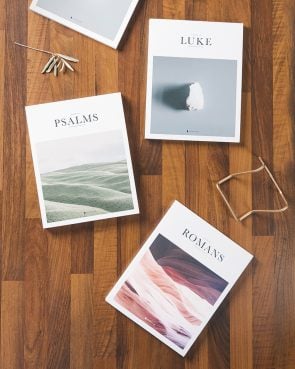 “It’s still the single bestselling book every year, bar none,” Siker said of the Bible. “It’s still being produced endlessly. So the question is, what form should it take?”

Melinda Bouma, publisher of Zondervan, one of the largest Bible publishers in the world, said the company’s first niche Bible was the “New International Version Student Bible,” which came out in 1985. Since then, Zondervan has created dozens of niche Bibles for all demographics, which now make up half of the company’s sales, she said.