In 1997, my students and I traveled to Croagh Patrick, a mountain in County Mayo, as part of a study abroad program course on Irish literature I was teaching for the University of Dayton. I wanted my students to visit the place where, each July, thousands of pilgrims pay homage to St. Patrick, who, according to lore, fasted and prayed on the summit for 40 days.

While there, our tour guide relayed the story of how St. Patrick, as he lay on his death bed on March 17 in A.D. 461, supposedly asked those gathered around him to toast his heavenly journey with a “wee drop of whiskey” to ease their pain.

The mention of whiskey left me wondering if St. Patrick may have unintentionally influenced the way most of the world celebrates the holiday today: by drinking.

The legend of St. Patrick

Because historical details about St. Patrick’s life remain shrouded in speculation, scholars are often stymied in their attempts to separate fact from legend.

In his spiritual memoir, “Confessio,” St. Patrick describes how he was brought to Ireland as a slave. He eventually escaped, rejoining his family in Britain, probably Scotland. But while there, he had a recurring dream, in which the “Voice of the Irish” called to him to return to Ireland in order to baptize and minister to them. So he did. 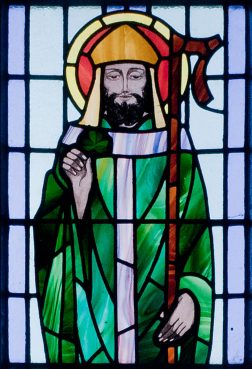 The Irish revere the account of this dream described in the “Confessio”; they accept the simplicity and fervor of his words and feel a debt of gratitude for his unselfish commitment to their spiritual well-being.

St. Patrick’s efforts to convert the Irish to Catholicism were never easy. Viewing him as a challenge to their power and authority, the high kings of Ireland and the pagan high priests, called Druids, resisted his efforts to make inroads with the population.

But through his missionary zeal, he was able to fuse Irish culture into Christianity, whether it was through the introduction of the Celtic Cross or the use of bonfires to celebrate feasts like Easter.

Again, many of these stories could amount to no more than myth. Nonetheless, centuries after his death, the Irish continue to show their gratitude for their patron saint by wearing a spray of shamrocks on March 17. They start the day with mass, followed by a daylong feast, and prayer and reflection at night.