Some Rohingya Refugees Prefer Death in Bangladesh Over Repatriation to Myanmar

When 60-year-old Dil Mohammad found out in November that he was on a list of some 2,000 Rohingya refugees to be sent back to Myanmar, he grabbed the bottle of rat poison and poured it down his throat. His wife forced him to vomit and rushed him to the nearby Médecins Sans Frontières hospital.

To Mohammad, suicide, a grave sin in Islam, was preferable to returning to the persecution that his people have suffered for decades in their historic home in western Myanmar.

“It’s better to die in Bangladesh, where I would get a proper Islamic burial, than be killed in Myanmar for being Muslim,” he said. “God will forgive my act of suicide because he knows our pain.”

Some 700,000 Rohingya, a Muslim ethnic minority from northern Rakhine state across the border in Myanmar, have flooded into refugee camps in Bangladesh since August 2017, when Rohingya militants known as ARSA (the Arakan Rohingya Salvation Army) attacked Myanmar border police, setting off a violent retaliation. Rohingya villages have been razed and Myanmar troops have allegedly raped and killed thousands of Rohingya civilians.

Mohammad and his family, fearing for their lives, walked for days through forests in torrential rain, arriving in Bangladesh in September 2017.

“There was nothing here when we arrived, just trees and land,” said Mohammad. Local Bangladeshi families helped the refugees set up shelters and provided food and water until aid groups and Bangladesh’s armed forces arrived to set up makeshift camps. 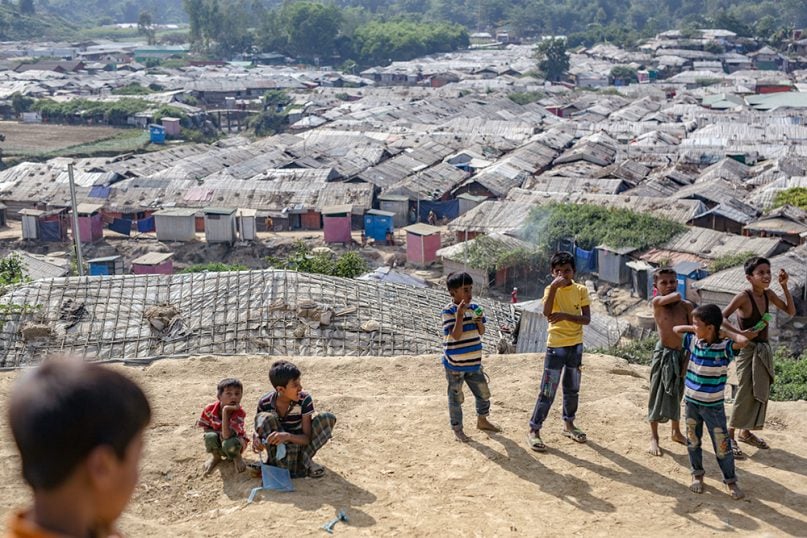 Rohingya children play with kites at the Unchiprang refugee camp in southern Bangladesh on Dec. 11, 2018. RNS photo by Amir Hamja

Abdul Hamid, a community leader in the camps, said he left a flourishing restaurant business and expansive ancestral farmland in Myanmar. Now he and his family live off meager rations of rice and lentils supplemented by occasional meat and vegetables when they manage to secure cash. They sleep in a dusty hut with sewage running in a gutter out front.

“We struggle with the refugee life here, but we’re grateful to be alive. We’d rather die here than be killed just for being Muslim in Myanmar,” Hamid said.

In October, Bangladesh and Myanmar agreed to put into effect a bilateral repatriation agreement, with the first 150 refugees scheduled to return in mid-November. The plan was opposed by the U.N.’s refugee agency, UNHCR, and other aid groups, as well as by the refugees.

“When I heard we were on the list, I sent my family away to one camp and I ran away to another,” said Hamid.

A few weeks before repatriation began, officials from Bangladesh’s Refugee Relief and Repatriation Commission summoned 54 refugees and, according to Hamid, told them that those who were willing to go back to Myanmar would receive identification cards to replace ones that had been confiscated in Myanmar under a 1982 law that stripped the Rohingya and other minorities of their citizenship.

That measure also prohibited them from traveling, while making life at home difficult. It blocked access to state schools beyond primary grades, made minorities ineligible for government jobs and placed restrictions on marriage, family planning and religious choice.

Besides proving their identity, the assembled refugees were told in November, their new cards would guarantee them certain rights.

“They told us Bangladesh would bring us back if we were treated badly there, but how are we supposed to believe that?” asked Hamid.

Khairul Bashir, another community leader, said he and his family were also on the list, adding that all the families in his section of the camp were ready to take poison if the authorities forced them to go.

“There’s a mice problem in the camps right now, so we all have rat poison in the house,” Bashir explained. “We were all prepared to die.”

According to a recent Amnesty International report, satellite images show that Myanmar’s military has built bases and roads where the Rohingya villages once stood.

“None of us are ready to go back until the 1982 law is repealed and we get full rights as citizens in Myanmar,” explained Mohammad Ilyas, whose name has been modified to conceal the identity of his family.