Fighting Anti-Semitism and Remembering the Holocaust on Social Media

In December 2018, the Auschwitz-Birkenau Memorial and Museum in Oświęcim, Poland, gained more than 120,000 Twitter followers in about five days, according to memorial officials. The growth came not from paid advertising or any concerted campaign. It was motivated by Twitter users rushing to support the memorial against a flurry of anti-Semitic tweets.

As anti-Semitism continues to increase on social media, Holocaust memorials and museums dedicated to chronicling the genocide of World War II are stepping up to help preserve the truth and create a community. The online world is coming to their aid.

“The information (people) can find is sometimes problematic,” said Paweł Sawicki, who has worked in the Auschwitz Memorial’s press office for 11 years. “Sometimes they could find a site that’s not factually correct. They could be exposed to Holocaust denial and different manipulations.”

Holocaust deniers were early adopters of online platforms and social media, and they have only expanded their activity as the world came online. In January of 2018, the World Jewish Congress found, the use of anti-Semitic symbols on Twitter and blogs had increased 30 percent over the same period two years earlier; Holocaust denial had doubled. The previous year, the Anti-Defamation League found 81,400 tweets with anti-Semitic sentiment each week on average.

There is a healthy debate about how much the social media platforms are responsible for policing hate speech. Reddit has banned Holocaust deniers on its AskHistorians forum and “quarantined” groups that attract anti-Semites by warning users before entering the page of the offensive views they contain. But last summer, Mark Zuckerberg got into hot water when, during an interview with Kara Swisher on Recode, he appeared to defend the right of Holocaust deniers to post on Facebook.

“I don’t think that they’re intentionally getting it wrong,” Zuckerberg told Swisher. “It’s hard to impugn intent and to understand the intent.” 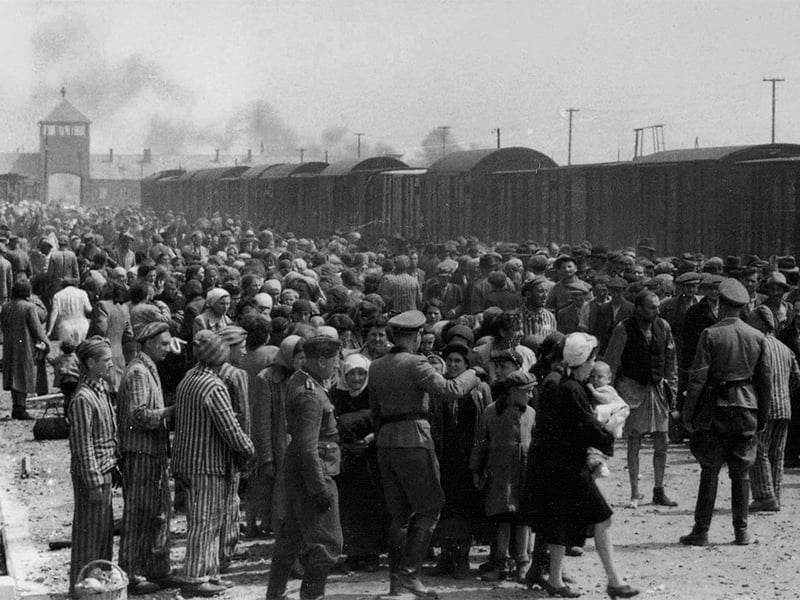 The “selection” of Hungarian Jews on the ramp at the death camp Auschwitz-II (Birkenau) in Poland during German Nazi occupation in May/June 1944. Jewish arrivals were sent either to work or to the gas chamber. Photo courtesy of Creative Commons

Holocaust museums and memorials around the world say they can’t wait for the platforms to take action. Mostly they try to combat anti-Semitism by tirelessly working to create a “virtual community of remembrance,” Sawicki said.

The United States Holocaust Memorial Museum in Washington, D.C., has a social media team dedicated to running its extensive menu of Facebook and Twitter accounts, including the Simon-Skjodt Center for the Prevention of Genocide page, “Ask a Curator” on Instagram and its Facebook Live series.

The museum’s 2018 “AskWhy” campaign, which answers difficult questions raised by Holocaust history, increased its Facebook following by more than 200 percent and more than 50 percent on Instagram, said Andrew Hollinger, the museum’s communications director.

The technology-fueled rise in anti-Semitism and Holocaust denial, Hollinger said, makes it important for the museum to provide accurate information on social. “Social media has given the museum an incredible opportunity to reach and engage new audiences in new ways,” Hollinger said. “Unfortunately, those who espouse hate and deny the Holocaust have that same opportunity.”

The Auschwitz Memorial first began noticing negative posts around 2009, Sawicki said, which his office hoped its Facebook page would counter by becoming a resource for factual information. At the same time, some worried that people would feel a Facebook page would trivialize the Holocaust. The press team had every intention of pulling the project if things didn’t go well. Today, Sawicki runs a Facebook page with more than 270,000 followers, a Twitter account with more than 296,000 and an Instagram with more than 50,000 — all while working as press liaison for journalists and documentary filmmakers, planning events and giving tours (including one, he noted, to Katy Perry).

“You can see what we’re doing is important to a number of people,” he said. “The responsibility that comes with that is immense.”

Sawicki does not have a strategic social media plan or even have a target audience in mind. Instead, he said, the traffic to his feeds grows by word of mouth, or tweet. He got a boost when the American comedian Kathy Griffin linked her more than 2 million followers to the Auschwitz Memorial account.

The Auschwitz Memorial never pays for ads or followers on social media, which Sawicki regards as disrespectful.

Instead, he’s just going to keep doing what he’s doing — educating people about the memorial and the Holocaust.