Former Cantor Regains His Lost Voice as a Composer and Rabbi

Then, when his voice failed, he had to learn how to listen.

It was a stressful experience, he said, stressful enough to raise a cantor’s blood pressure.

“You’re yearning to interpret the liturgy, and all you can interpret is the silent prayer. That’s very humbling,” said Arnold Saltzman, his voice reduced to a whisper. “Cantors have egos. Even if I wasn’t the biggest ego, I certainly had a lesson in sitting, listening to others.”

Some 15 years ago, Saltzman had no choice but to reinvent himself. He pursued rabbinical ordination and found ways, as a music composer, to find his voice again. In a 2012 Yom Kippur sermon titled “Valley of the Broken Piano Hammers,” which he delivered at one of the three congregations where he was a part-time rabbi, Saltzman spoke about a piano graveyard in New York as a metaphor for a troubling culture where everything is disposable.

“It was unimaginable to me that people could do something like that (destroy pianos),” he told RNS last month in his office at Adas Israel Congregation in Washington, where he is cantor emeritus. “Maybe that’s a metaphor for myself — that with my voice in shambles, I felt I had something to give.” 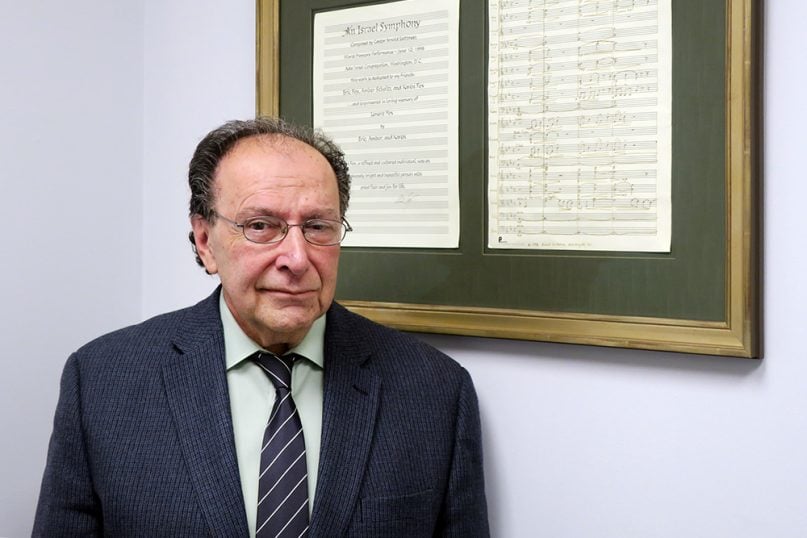 Arnold Saltzman poses in his office in Washington. RNS photo by Menachem Wecker

Saltzman, 70, also talked in a whisper to RNS from the pews at National Presbyterian Church during a dress rehearsal for his latest composition. At the church, some 200 performers, including American University’s orchestra, chorus and chamber singers, the Strathmore Children’s chorus, and soloists Janice Meyerson (mezzo-soprano) and Rob McGinness (baritone), performed a choral symphony that Saltzman composed.

The music was inspired by writings of 12th-century Spanish rabbi, philosopher and poet Judah Halevi, about whom Saltzman learned as an Orthodox yeshiva student growing up in New York in the 1950s and 1960s.

As a child, Saltzman was known as a singer but had little interest in religious instruction. At school, he was prone to fall asleep in religious classes.

Music was a different matter.

Saltzman sang in the Metropolitan Opera children’s chorus for six years and in the Campbell’s soup commercial soundtrack, and he performed with renowned cantors David and Moshe Koussevitzky, Shalom Katz and Moshe Ganchoff, including before 20,000 people at Madison Square Garden. Weddings and bar mitzvahs netted him $50 (the equivalent of $435 today) at the Waldorf, and Sabbath and festival services at Catskills resorts Grossinger’s and Kutsher’s could bring in double that.

Saltzman taught music in New York and then served as cantor at the Conservative congregation Adas Israel for 24 years. In 2002, he contracted a virus that caused dysphonia, a disorder in which muscle spasms affect one’s voice.

“I was able to speak but not sing,” he said.

A year of therapy suggested surgery could restore his singing voice, but the surgery exacerbated matters and had to be reversed. For 10 years, Saltzman was able to speak well and sing a little, but a 2013 car accident worsened his condition to spasmodic dysphonia, which he said has few medical remedies.

“With some medication, I’m good for 30 minutes,” he said in the whisper, which he broke only when he hummed, perfectly, several Hebrew songs.