‘Lord, Let the Storm Pass’: Piled in the Bathtub, a Cairo, Georgia Family Prayed Till the Tornado Spun By, Almost Taking Their House With It

All told, the twister damaged or destroyed 129 residences and 38 businesses.

It seemed like an ordinary Sunday night at the Sanders’ house.

Gail Sanders was doing her daughter Naya’s hair in the den. Her son Nijal was playing on his Xbox in his bedroom. Raymond Sanders was keeping an eye on the weather. Tornado sirens had gone off in town. He heard on the news a tornado was close to Bainbridge, Georgia, only a half hour west of town. He asked his wife and kids to put on their shoes.

The whole family headed to a bathroom in the middle of their brick, ranch-style house, tucked in a neighborhood off Fourth Avenue Southwest. As soon as they closed the bathroom door behind them, they could hear the mayhem outside.

“It was on us,” Raymond Sanders said. “We could hear the rumbling and whistling. I had a feeling it was over my house because it felt like the entire house was shaking, like an earthquake or something.”

They piled in the bathtub, one on top of the other. Gail Sanders laid atop her two children. Raymond Sanders laid across all three, shielding them from what might come. The son of a Wakulla County preacher, he started to pray out loud.

“I was telling the Lord to cover us with His blood, to save us and let the storm pass,” he said.

Nijal, 18, felt a moment of fear as the tornado roared outside.

“But eventually all of that went away,” he said. “Because my dad was praying and stuff like that. I guess it calmed me down.”

But Naya, about to turn 13, was sure she wouldn’t make it out of the bathtub alive.

“In my head,” she said, “I was like, OK, I’m leaving this way. So I’m just going to hold everybody. And I’m going to go home — just go to heaven and be with Jesus.”

Gail Sanders, an operational analyst for the Florida Department of Corrections in Tallahassee, feared for the lives of her kids and husband, who also works in Tallahassee, as a quality assurance coordinator for Capital Health Plan.

“But we know God,” she said. “So we prayed through the whole thing. And by the time we said ‘Amen,’ everything was over.”

‘Couldn’t believe we survived this’

When the awful rumbling finally stopped, Raymond Sanders got out of the tub, opened the bathroom door and shined his flashlight out.

“I kind of looked up and laughed and told my wife, ‘I think we’re missing part of the roof,’ ” he said.

First responders arrived within minutes, shining flashlights through a bedroom window and asking if any survivors were inside. They told the family to stay put because of the danger from debris and downed electric lines.

They emerged from their house a couple of hours later. But they wouldn’t comprehend the scope of the damage until the next day.

“It really didn’t hit me until we came back over and it was daylight and I was able to see,” he said. “And I was just thankful to God because I couldn’t believe we survived this. It was pretty horrific.” 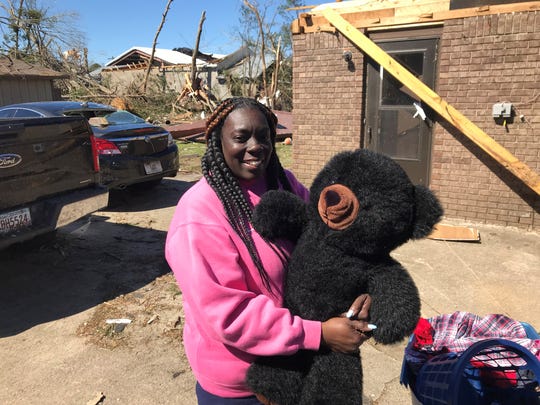 Gail Sanders holds onto a Teddy bear her husband Raymond Miller won for her at the fair in Tallahassee in the late 1990s. It’s one of the few family possessions spared when a tornado hit their home in Cairo, Georgia, on March 3, 2019. (Photo: Jeff Burlew)

The four walls of their house were still standing. But the entire roof was gone. And nearly everything inside — their furniture, TVs and most of their clothing — was either destroyed or scattered to the winds.

They lost old wedding and baby pictures, school projects and drawings by the kids. Nijal lost his favorite jacket, which he bought last Christmas with his own money. Naya lost her book of poems she wrote.

“It’s the sentimental stuff that you miss,” Gail Sanders said.

The family gathered Tuesday at their house to sort through what was left and toss out what they couldn’t salvage. Gail Sanders clutched a big stuffed bear her husband won for her at the fair in Tallahassee during one of their first dates more than 20 years ago. They named the bear Nijal at the time. Later, they gave their first born the same name.

“He was in the family before the kids,” she said. “I’m so grateful. Both my Nijals made it.” 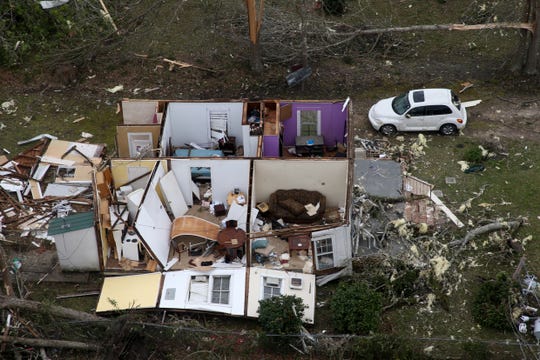 The tornado, an EF2 with winds of 120 mph, touched down on Monrovia Nursery on Highway 111 at 7:54 p.m. and tracked 2.7 miles across Grady County, according to the National Weather Service in Tallahassee.