What Happened at the United Methodist General Conference, and What Happens Now?

A recent meeting of United Methodists in St. Louis caught the attention of everyone from Westboro Baptist Church, which picketed outside the meeting, to the presiding bishop of the Evangelical Lutheran Church in America, who recognized “these costly struggles are familiar from our own recent history.”

The special session of the United Methodist Church General Conference met Feb. 23-26 at the Dome at America’s Center in St. Louis to consider several plans to move the denomination forward despite deep divisions over the inclusion of its LGBTQ members.

In the end, the General Conference approved the “Traditional Plan,” which continues the denomination’s ban on the ordination and marriage of LGBTQ United Methodists.

Still, not even everyone at the meeting is clear on what happened at the special session and what it means for the future of the denomination.

Why were United Methodists holding a General Conference this year? 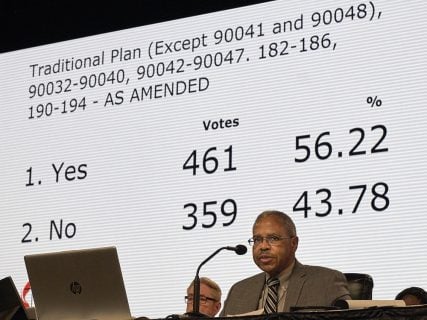 A screen displays the results of a vote on the Traditional
Plan during a legislative session of the special session
of the General Conference of the United Methodist
Church, held in St. Louis on Feb. 25, 2019. Photo by
Paul Jeffrey for United Methodist News Service

The meeting was a special session of the global denomination’s decision-making body, which usually meets every four years. But at its last meeting, in 2016, delegates became locked in the same stalemate they have had for decades over the full inclusion of LGBTQ members in the church. They decided to refer all discussion about sexuality to a specially appointed commission.

The General Conference also approved several petitions related to clergy and churches that might leave the denomination based on the decisions it made.

But I thought the bishops had recommended a different plan?

That’s because they did. The Council of Bishops recommended the One Church Plan, which would have allowed individual churches and regional annual conferences to decide whether to ordain and marry LGBTQ members

But the plan was voted down by the Legislative Committee, made up of the same 864 delegates who would vote the next day in the plenary session of the General Conference.

And a last-ditch effort to substitute the One Church Plan for the Traditional Plan was voted down again despite an impassioned plea from the Rev. Tom Berlin, the Virginia pastor and Commission on a Way Forward member who originally had submitted the One Church Plan legislation to the General Conference.

Berlin predicted that church members, congregations and even entire regional annual conferences in the United States would leave the United Methodist Church if the Traditional Plan passed.

Well, what does the Traditional Plan do?

In short, the Traditional Plan strengthens enforcement of language in the denomination’s rulebook regarding the ordination and marriage of LGBTQ members.

The Book of Discipline currently states that “the practice of homosexuality is incompatible with Christian teaching” and that “self-avowed practicing homosexuals” cannot be ordained as ministers, appointed to serve or be married in the church.

And it strengthens current complaint procedures and penalties in the Book of Discipline, including a minimum penalty for a clergy member who performs a same-sex wedding: a one-year suspension without pay for the first offense and a loss of credentials for the second.

Before the meeting in St. Louis, the Judicial Council, the United Methodist Church’s highest court, found seven of the 17 petitions that made up the Traditional Plan unconstitutional. The court also found portions of two other petitions unconstitutional. 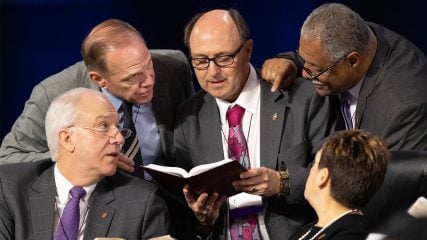 Bishops confer over the issue of whether the Legislative
Committee can refer items to the denomination’s Judicial
Council for review during the 2019 United Methodist
General Conference in St. Louis on Feb. 25, 2019. Photo
by Mike DuBose/UMNS

That court again found all or parts of a number of petitions unconstitutional before the final vote at the General Conference. Delegates were unable to amend all the petitions before the plan passed.

The Traditional Plan will now go back to the Judicial Council in April.

“The petitions that did pass that are constitutional are very significant, and have real teeth,” said Lomperis, who supported the Traditional Plan.

A key provision of the Traditional Plan that would have required bishops to sign a statement certifying “I will uphold United Methodist standards on marriage and sexuality in their entirety” was jettisoned before the vote.

Other petitions already found unconstitutional allow the Council of Bishops to recommend a bishop for an involuntary leave of absence or retirement and create a committee to hear those requests in order to establish a “process by which the Council of Bishops may hold one another accountable.” As part of the process to determine whether to ordain a candidate, another petition found unconstitutional allows the Board of Ministry “shall conduct an examination to ascertain whether an individual is a practicing homosexual, including information on social media.”

The Rev. Mark Holland — a delegate and executive director of Mainstream UMC, which advocated for the One Church Plan — called the Traditional Plan’s win merely a “symbolic victory” in a post on the Mainstream UMC website.

“In reality, we passed no legislation at General Conference. … We are essentially at status quo,” he said.