WATCH: Oprah Winfrey Sits Down With Michael Jackson Accusers, Calls Child Sex Abuse a “Scourge on Humanity” While Praising ‘Leaving Neverland’ Documentary and the Brave Men Coming Forward to Say ‘They Were Raped by King of Pop’

The world’s most famous survivor of sexual abuse sat down with the two men who have accused Michael Jackson of raping them when they were children in the new documentary Leaving Neverland.

Oprah Winfrey taped the HBO and OWN special After Neverland on Thursday in New York City, were she was joined by the director of the documentary, Dan Reed, and the two men at the center of the film, James Safechuck and Wade Robson.

That special will air Monday night after the completion of the show, but Winfrey has made no secret about how powerful and important she believes this film is in shifting the way people think about sexual abuse.

And Winfrey is using all her star power to promote the documentary and her after show, going so far as to retweet eight stories about the special and post two trailers.

It is no surprise given that Oprah was raped as well by someone close to her when she was nine, just like Robson and Safechuck, who allege they were seven and 10 when they were first sexually abused by Jackson.

A rep for Oprah contacted DailyMail.com after the story was published and asked that it be noted that it was the Oprah Winfrey Network and not Oprah herself who tweeted those stories.

The rep also took issue with DailyMail.com stating that Oprah ‘denounced’ Jackson, despite the talk show host noting at one point that parents should beware of individuals who just want to be around their children.

After Neverland will air Monday at 10pm on both HBO and OWN after the finale of Leaving Neverland.

‘Here’s the reason why I’m here. Twenty five years of the Oprah show I taped 217 episodes about sexual abuse,’ said Oprah at the start of the taping.

‘I tried and tried and tried to get the message across that sexual abuse was not just abuse, that it was sexual seduction. But for me, this moment transcends Michael Jackson, it is much bigger than any one person. It is a moment in time that allows us to see this societal corruption. It is a scourge on humanity.’

‘So if it gets you, our audience, to see how it happens, then some good would have come of it.’

She illustrated the divide between those who have been sexually abused and those who have not later in the interview while using her friend Gayle King as an example.

‘So many parents don’t understand – it does not feel like hurt.’

Oprah and King actually watched the documentary together last month on Oprah’s birthday.

‘Just watched ALL FOUR hours of Leaving Neverland. Powerful, compelling, & a game changer for those who have been afraid to speak up of child sex abuse,’ wrote King.

‘My heart goes out to Wade Robson & James Safechuck. Thank YOU for sharing your pain, it will make a difference. Bravo to producer Dan Reed.. I’m still reeling.’

This is not the first time Jackson has been accused of sexually assaulting young boys, and both Safechuck and Robson had shared their stories in the past. 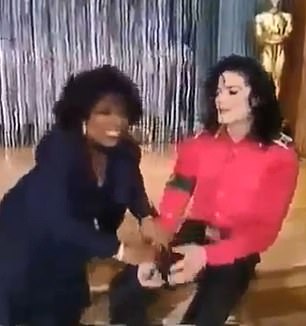 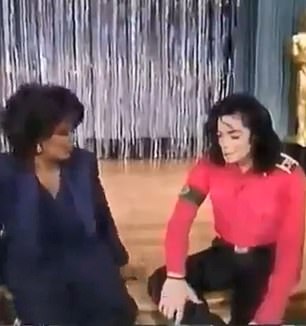 Back in the day: Oprah sat down with Jackson just once, in 1993, and it remains to this day the most watched interview in television history with 90 million viewers

The Queen of Daytime did sit down with Jackson for one interview back in 1993 that attracted an audience of 90 million people and remains to this day the most watched interview in television history.

That was filmed just before the first allegations about Jackson had been made public, and so the conversation centered more around Jackson’s difficult childhood, his love life, and his plastic surgery.

Early in the interview, Michael opened up to Oprah about his insecurities and the fact that he struggled as a teen with pimples, which made him think he was ‘ugly.’

He then told Oprah his father would tell him he was ugly during his days fronting The Jackson 5.

‘I love my father but I don’t know him,’ responded Michael.

When asked if he was angry with the man, Michael struggled to answer, and looked to be stalling for time.

He twice repeated the question back to Oprah before stating: ‘Sometimes I do get angry. I don’t know him the way I’d like to know him. My mother’s wonderful. To me she’s perfection. I just wish I could understand my father.’

He then revealed how deeply unhappy he was at the height of his fame.

‘I felt there wasn’t anything important for me to say and those were very sad, sad years for me,’ said Michael.

When asked how this was possible given his success, Michael explained: ‘Oh, there’s a lot of sadness about my past and adolescence, about my father and all of those things.’

Oprah then asked if Michael was teased by his father, and then followed that up by bringing up the allegations of abuse.

‘Would he… did he ever beat you?’ asked Oprah.

‘He saw me, he wanted me… I guess, I don’t know if I was his golden child or whatever it was, some may call it a strict disciplinarian or whatever, but he was very strict, very hard, very stern. Just a look would scare you, you know.’

Michael then explained just how afraid he was of the man by stating: ‘Like there’s been times when he’d come to see me, I’d get sick, I’d start to regurgitate.’

He added that he was still afraid of the man, then quickly began to apologize.