Judge Sets Bail at $1M for ‘Emotionless’ R. Kelly After Court Hears Explicit Details of His Alleged Sexual Abuse Against Three Underage Girls, as the R&B Star’s Lawyer Says, ‘Contrary to the Song, He Doesn’t Like to Fly’

R Kelly was granted $1 million bond in court on Saturday after having been indicted and booked on 10 counts of aggravated criminal sex abuse.

Judge John Fitzgerald Lyke Jr. imposed a bond of $250,000 for each of the four women the embattled R&B singer, real name Robert Sylvester Kelly, is accused of abusing.

Kelly’s lawyers had asked for a lower bond amount, arguing that the defendant’s finances are a mess in part because he was recently dropped by his record label.

He also had to surrender his passport even though his attorney, Steve Greenberg, said Kelly is not a flight risk, telling the judge: ‘Contrary to the song, Mr. Kelly doesn’t like to fly.’

Bond was set after prosecutors laid out the stunning allegations against Kelly in graphic detail. Three of the four cases involved women who were underage. 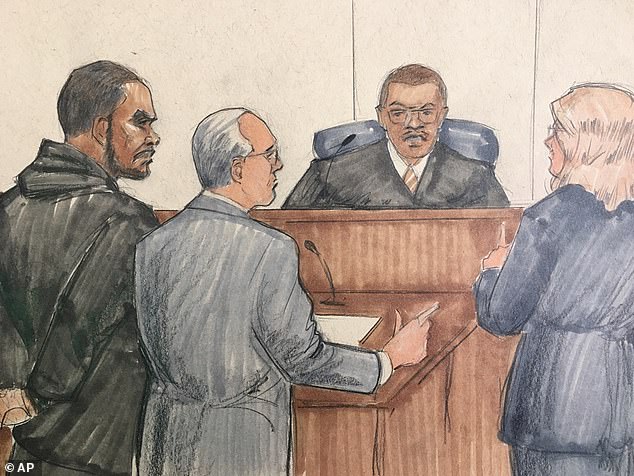 Kelly has been accused of sexually abusing four victims, at least three who were under the age of 17 at the time. The singer (above in a court sketch from Saturday) reportedly kept his eyes locked on the courtroom floor and looked dejected as Judge John Fitzgerald Lyke Jr. called the allegations against him ‘disturbing’ 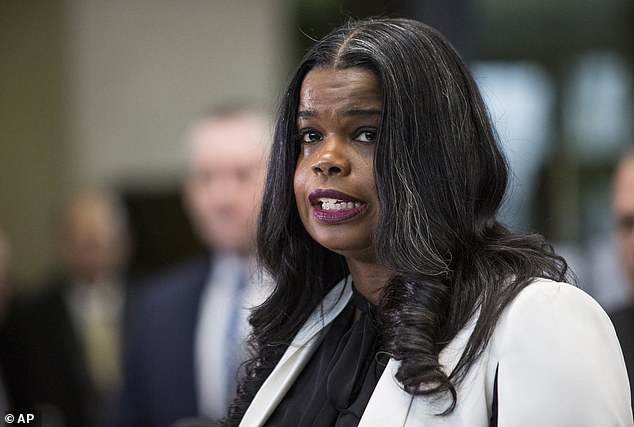 Cook County state’s attorney Kimberly Foxx spoke to the press outside the courtroom following Kelly’s bond hearing and provided more details about the charges brought against the singer, which the presiding judge called ‘disturbing’ 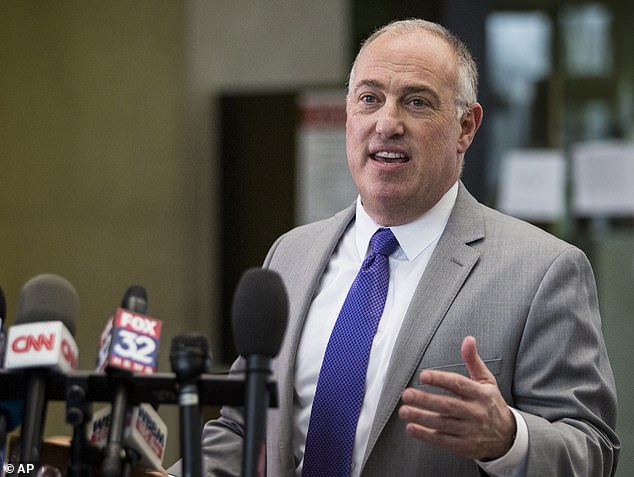 Kelly’s attorney Steve Greenberg (above after the hearing) had asked for a lower bond amount, arguing that the defendant’s finances are a mess because he was recently dropped by his label

After the hearing, Cook County state’s attorney Kimberly Foxx addressed the press and provided additional details on each of the indictments.

The first victim, identified as H.W., allegedly met Kelly when she was celebrating her 16th birthday and his manager gave her the artist’s card.

The victim’s mother approached the manager and informed him that the girl was only 16. The girl later took the card out of her mother’s purse and contacted Kelly, who told her to skip school and come to his studio, Foxx said.

The pair allegedly had regular sexual contact including oral and vaginal intercourse about once a month between May 26, 1998 and May 25, 1999. Kelly is charged with four counts of aggravated criminal sexual abuse for the alleged offenses involving that victim.

The second indictment is based on a disturbing video purportedly showing Kelly have sex with a 14-year-old girl identified as R.L., in an incident that took place between September 26, 1998 and September 25, 2001.

That incident resulted in two counts of aggravated criminal sexual abuse – one for ‘contact between Robert Kelly’s penis and R.L’s sex organ’, one for contact with her ‘mouth.’

The allegations came to light in 2001 when a witness having a conversation with Kelly and his associates was asked to retrieve video showing the artist having sexual intercourse with the victim. The witness turned the video over to police.

The third indictment with one count of aggravated sexual assault involved a 24-year-old hairdresser, identified as L.W., who was hired to braid Kelly’s hair.

Prosecutors say that on February 18, 2003, Kelly told the woman that he didn’t want her to braid his hair but wanted a head massage as he exposed his penis to her.

He then allegedly grabbed her head and tried to force her to perform oral sex on him. When she resisted, Kelly ejaculated on her and spit in her face several times, prosecutors said. Kelly’s DNA was recovered from the alleged victim’s shirt.

The fourth victim, identified as J.P., met Kelly when she asked for his autograph while attending his 2008 trial on child pornography charges.

According to an indictment detailing three counts of aggravated sexual assault, the pair engaged in oral and vaginal sex between a period from May 2009 to January 2010. She was between 13 and 17 at the time.

Prosecutors say Kelly would often spit on the victim, slap her in the face, choke her and ejaculate on her. She saved a shirt from one of the incidents and turned it over to police, who found a DNA match to Kelly.

If convicted on all 10 counts, Kelly could face up to 70 years behind bars. His arraignment has been scheduled for February 28.