A prominent pastor who helped mobilize the movement that ousted longtime dictator Robert Mugabe in late 2017 is now facing 20 years in prison for opposing the new regime he helped usher in.

Pastor Evan Mawarire of His Generation Church faces charges of incitement to violence and subverting the government of President Emmerson Mnangagwa – the same charges Mawarire faced under Mugabe before the president was deposed.

The pastor says that power may have changed hands but not much else is different in the southern African country.

“We thought that things would change after Mugabe but we replaced Mugabe with another Mugabe,” said Mawarire, 41. “It breaks my heart … but we will fight on.”

In November 2017, Mawarire helped mobilize thousands of Zimbabweans onto the streets of the capital, Harare, to demand Mugabe’s resignation after an intervention by the country’s military that ended the iron-fisted leader’s 37-year rule.

Shortly before Mugabe was forced to step down Nov. 21, 2017, Mawarire was arraigned in court on subversion charges after he joined other pro-democracy activists in calling for a two-day national shutdown that paralyzed the transport sector and brought business to a halt in the country. He was acquitted after Mnangagwa took over on Nov. 24, 2017. 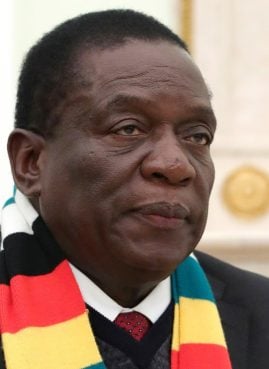 The new charges arose in January after the pastor and Peter Mutasa, president of the Zimbabwe Congress of Trade Unions, Zimbabwe’s main labor body, jointly posted a video on social networking sites in January calling on Zimbabweans to stay at home in a peaceful protest of Mnangagwa’s planed fuel price hike — a rise of more than 150 percent.

The rise comes at a time when the country’s economy is collapsing and the majority of Zimbabweans are jobless and live far below the poverty line.

After that call, some Zimbabweans took to the streets, while authorities responded by shutting down the internet and firing on protesters, killing more than a dozen people, according to the Zimbabwe Association of Doctors for Human Rights.

Hundreds of people were wounded and some women were raped, while more than 1,000 people were arrested, civil rights groups and the main opposition Movement for Democratic Change  party led by Nelson Chamisa allege.

The government and the army have blamed rogue elements for the assaults and deaths.
“We have a very disciplined army that maintained its constitutional duties during the protests and those offenses could have been committed by rogue elements or army deserters,” said Brig. Gen. Douglas Nyikayaramba, a top military chief, who appealed to Zimbabweans to report to the police any member of the army whom they suspected to have acted outside his or her constitutional mandate so that investigations can be conducted.

Meanwhile, Mawarire was arrested Jan. 16 and jailed in the country’s maximum security prison until the High Court released him on bail two weeks later.

Mawarire said he saw evidence of beatings in the prison where he was held: “I was locked up with more than 300 men whose limbs were broken after being beaten by police and soldiers. I never saw those kinds of injuries before,” he said. “It was worse than under Mugabe. It’s a tragedy.”