Harvest Bible Chapel, an embattled Chicago-area megachurch, announced this past weekend that the executive committee of its elders will resign.

In a statement, the elders said they’d failed in their duty to properly oversee MacDonald, who was terminated for what they called “a sinful pattern of inappropriate language, anger and domineering behavior.”

“We acknowledge failures in direction, discipline and response time. We, as the larger elder board, have made mistakes, and we own these,” they said in the statement, which was read during church services and posted later on the church’s website.

The elder resignations are one of several changes that will take place in the weeks to come at Harvest Bible Chapel.

Calling it “one of the most difficult weeks in the history of our church,” executive committee member Bill Sterling said in the statement that the church also will make changes to “both the composition and structure” of its elder board. That board currently is composed of more than 30 men, he said, which has “made it difficult to make decisions during times of adversity.” 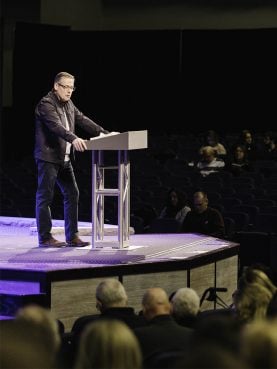 And the church will make changes to its campuses, abandoning plans to launch a new campus in suburban Hinsdale and returning its Naples campus to the elders and staff of that church.

Earlier this year, Harvest had fired Pastor John Secrest, who founded the Naples church. Secrest had objected to plans that allowed McDonald to preach at the Naples church while on an “indefinite sabbatical” from preaching and leadership in Chicago.

That sabbatical came after years of controversy over MacDonald’s leadership style and the church’s finances. The controversy flared up after Harvest sued two bloggers who had been critical of the church, along with a freelance writer who was investigating the church.

Harvest later dropped the lawsuit. But the controversy remained, and the church’s elders dismissed MacDonald after a local radio host played recordings of crude comments purportedly made by the pastor about his critics.

Fallout continued Tuesday (Feb. 19), as Moody Publishers, which has published most of MacDonald’s books, said those titles no longer are available for sale through the publisher. It will accept returns for credit through May 31.