Jhonny Godoy had taken to Twitter to proclaim his opposition to President Nicolas Maduro, posting a video that showed him running through the streets waving the national flag as protests erupted across Venezuela’s capital.

Two days later, his family said, rifle-wielding special police agents wearing black masks stormed into their home in the Caracas slum of La Vega, pulled him outside and shot him to death. 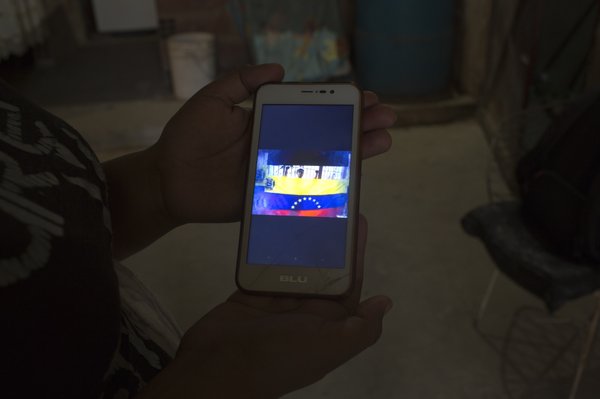 Marvelis Sinai shows the photo of his cousin Jhonny Godoy that she said was used by police to ask neighbors for the location of Godoy’s home. (AP Photo/Ariana Cubillos)

The slaying of the 29-year-old was part of a crackdown that has spread fear among young protesters in poor neighborhoods of Venezuela, where a history of steadfast loyalty to Maduro has begun to crack amid hyperinflation and shortages of food and medicine. At least 43 people have been killed in the round of protests that began last month, when Juan Guaido, the head of the opposition-controlled congress, declared himself interim president of the crisis-wracked country.

Human rights groups say some of those deaths appear to be targeted slayings by the National Police Action Force, or FAES, an elite commando unit created in 2017 for anti-gang operations. Rights groups say it is now acting against disaffected youths living in the slums. 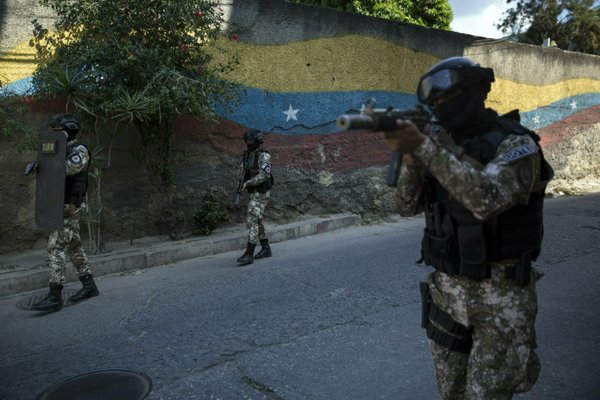 “Maduro seeks to sow fear,” said Rafael Uzcategui, coordinator of the respected rights group Venezuelan Education-Action Program on Human Rights, known as PROVEA. More than 700 opponents of Maduro have been arrested during the latest push by Venezuela’s opposition to oust the socialist leader, according to PROVEA and a crime monitoring group, Observatory of Social Conflict.

Maduro is facing more pressure than ever to cede power in the oil-rich nation. The Trump administration recently sanctioned Venezuela’s state-owned oil company, squeezing the country’s damaged economy even harder, and Guaido has been recognized as the country’s rightful leader by the U.S. and dozens of other nations that argue Maduro’s re-election to a second six-year term last year was fraudulent. A new round of sanctions Friday targeted four high-ranking intelligence officials, including the heads of the FAES commando unit and the feared SEBIN intelligence police. 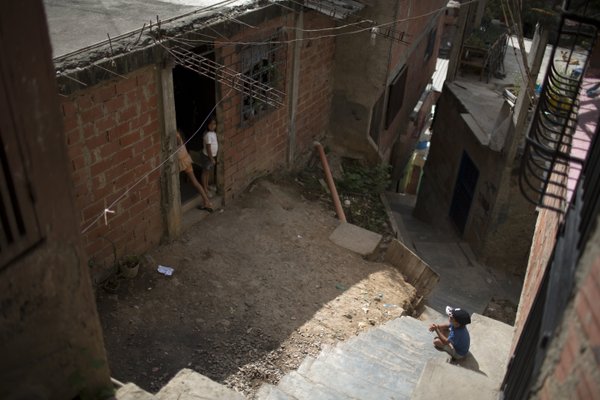 Kids gather at the entrance to what was Jhonny Godoy’s home. (AP Photo/Ariana Cubillos)

The country has seen the largest protests since 2017, when 120 people died in clashes with national guardsmen and pro-government civilians who fired on the masked demonstrators in middle-class neighborhoods. Now, critics say, Maduro is hitting back by sending security forces into the slums to try to suppress dissent.

PROVEA and Observatory say they recorded 35 deaths during a single week in January — most at night in poor neighborhoods — in addition to eight cases of apparent targeted killings by members of the elite commando unit.

Godoy’s cousin, Marvelis Sinai, said that when agents burst into the family’s home on Jan. 25, Godoy’s mother Ana Buitrago saw her son beaten and dragged out as she begged for his life. Minutes later, she heard two gunshots. 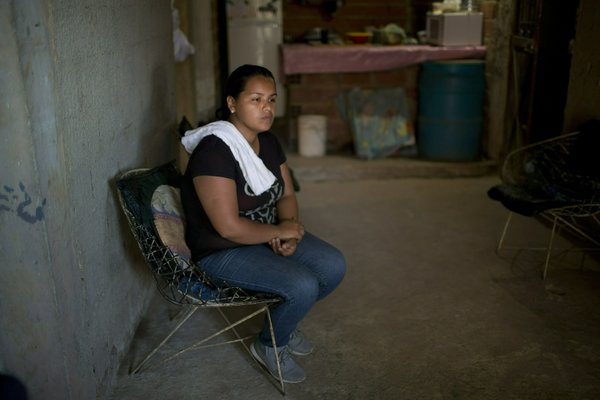 Godoy was shot in the abdomen and foot, and a disposable diaper was shoved in his mouth, apparently to suffocate him, Sinai said.

She said the family believes his killing was linked to the video he posted on Twitter two days earlier.

“I’m going to continue demonstrating because I learned it from my cousin,” said Sinai, who works for an opposition politician who hands out free food in the slums. “He died so we can have a free Venezuela.”

The case gained special prominence when a tearful Guaido met with Godoy’s mother at her home and assured her that her son’s death wouldn’t be in vain. Later, during a news conference, Guaido blamed the elite police commando unit for the killing.

Authorities have not commented on the case. But it’s not the first time the special agents have been linked to deadly operations. PROVEA released a report last month accusing the unit of involvement in more than 200 killings in 2018. 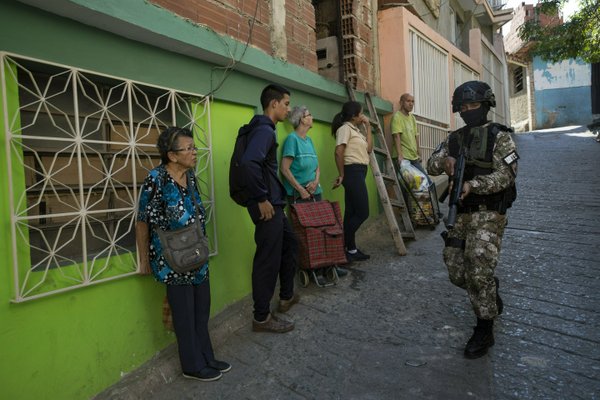 Residents stand near a wall as a member of the National Police Action Force, or FAES, patrol the Antimano neighborhood. (AP Photo/Rodrigo Abd)

Human Rights Watch also detailed widespread abuses by members of Venezuela’s security forces in reports published in 2014 and 2017. It quoted Foro Penal, a Venezuelan group that provides legal aid to detainees, as saying that more than 13,000 people have been arrested since 2014 in connection with anti-government protests.

The Prague-based CASLA Institute, headed by Venezuelan lawyer Tamara Suju, recently gave the U.N. International Criminal Court reports of 536 victims of torture in Venezuela since 2014, including 106 since the beginning of last year. Six nations also made the unprecedented move of asking the court to investigate Venezuela for possible crimes against humanity. 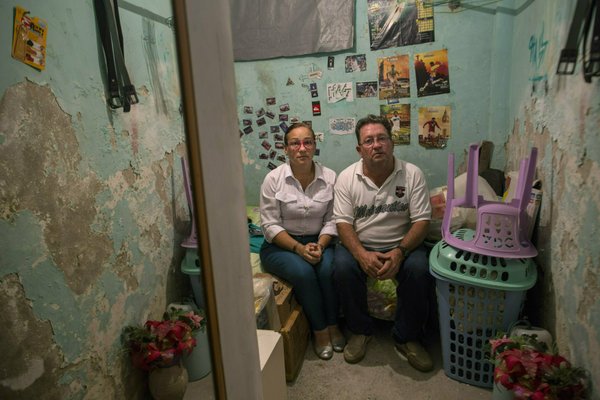 Ingrid Borjas and Pablo Borjas pose for a portrait inside the bedroom of their 19-year-old son Nick Samuel, who they say was killed when National Guards. (AP Photo/Rodrigo Abd)

The attorney general’s office has not given a figure for those killed in the recent protests, though Attorney General Tarek William Saab told a local TV channel that eight members of the national guard and the army had been detained for the killings of four people in the rural states of Bolivar and Yaracuy. 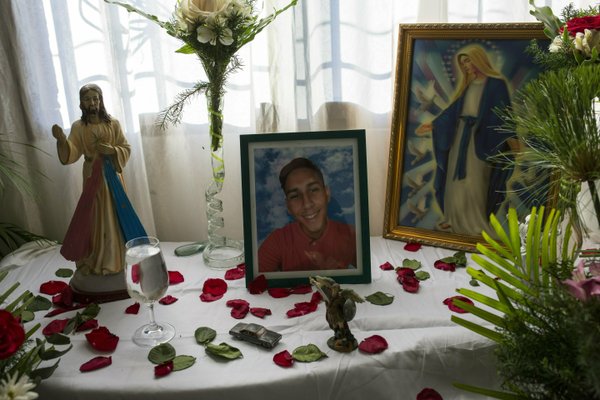 A portrait of Nick Samuel Oropeza sits on an altar. (AP Photo/Rodrigo Abd)

Among those who died when the latest protests broke out Jan. 23 was 19-year-old Nick Samuel Oropeza. His family says he was last seen alive fleeing alongside other protesters through the dusty streets of the capital’s Las Adjuntas slum as national guardsmen opened fire on people who had blocked streets with mounds of trash. Minutes later, he was found on the ground, his shirt drenched in blood.

A bullet destroyed his kidney and punctured a lung, said his mother, Ingrid Borjas, a 38-year-old lawyer.

“This needs to be investigated,” Borjas said, her voice breaking with emotion. “Justice needs to be served for my son and for others.” 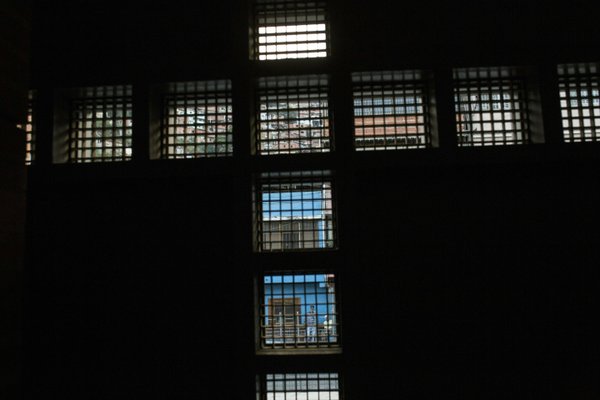 Residents can be seen though holes that form the shape of a cross, photographed from inside the Nazareno church where people pray for Nick Samuel Oropeza who was killed when anti-government protests broke out the previous week. (AP Photo/Rodrigo Abd)