President Trump doesn’t have a lot of nice things to say about Democrats these days. Well, except Sen. Chris Coons.

The same day the president made headlines for angrily walking out on Democratic leadership during shutdown negations (Jan. 9), he was also heaping praise on the Delaware Democrat.

“Senator Chris Coons: On occasion, we disagree, but I actually like him,” Trump said that morning during a bill-signing in the Oval Office. Coons wasn’t the only Democrat who worked on the bills splayed across the president’s desk, but he was the only one in the room, a fact the senator later said wasn’t lost on Trump or his daughter, Ivanka, who was also present.

The president then looked over his shoulder at the smiling senator: “We pray together, right? That’s a good step.”

The brief exchange highlighted the peculiar niche that Coons has carved out in a Washington riven by partisanship. A bridge builder with Republicans, Coons is known for helping create rare flickers of bipartisan agreement.

Part of his secret, it seems, is religion. Over the course of multiple interviews with Religion News Service, Coons, who grew up attending Red Clay Creek Presbyterian Church in Hockessin, Del., explained that his faith has not only provided grounding for his own life but has also emerged as a point of connection with Republicans, with whom he has forged lasting relationships — and legislation.

The fusion of service and faith has long fascinated Coons, who in the 1980s worked with the South African Council of Churches and Archbishop Desmond Tutu to support the anti-apartheid movement. Coons went on to earn a master’s in ethics from Yale Divinity School in the early 1990s, while getting a law degree from Yale Law School.

“This is what interests me more than almost anything that I’ve done in public life,” Coons said, referring to the intersection of religion and politics.

One of his divinity school professors, Serene Jones, now president of the liberal-leaning Union Theological Seminary in New York, described him as “an exceptional student.” Sen.-elect Chris Coons, D-Del., celebrates his win against Christine O’Donnell during a Democratic election night rally in Wilmington, Del., on Nov. 2, 2010. Coons is joined on stage with his wife, Annie, and two of his children. (AP Photo/Susan Walsh)

The interest persisted after Coons entered politics in 2000 and rose to the national stage in 2010, when he won a special election to fill the Senate seat vacated when Joe Biden was elected vice president. As senator, Coons — who campaigned for Ronald Reagan in 1980 before becoming a Democrat — has repeatedly argued that being liberal and a Christian are not incongruous. He has spoken in churchesand to Muslim groups, headlined a faith-themed 2017 event hosted by Union Seminary denouncing an uptick in anti-LGBTQ sentiment and penned an opinion piece in The Atlantic titled “Progressive Values Can’t Be Just Secular Values.”

For Coons, 55, being both a committed believer and ardent liberal also involves a lot self-deprecation regarding his own spiritual practices.

“I’m only on my third time through reading the Bible, start to finish, in a year,” he said, almost sheepishly, before spending several minutes outlining what he described as inadequate attempts to focus on Scripture, such as relying on devotionals and using a Bible app on his phone.

Coons is a vocal supporter of the separation of church and state, saying during the 2017 confirmation hearings for Supreme Court Justice Neil Gorsuch that he is “in awe” of Founding Fathers who called for it. But he appears to draw a distinction when it comes to the role of personal faith in politics.

“I wasn’t elected as part of an empire of Christendom. I was elected as part of a democratic republic where my state has lots of people who have different faith traditions and backgrounds or none at all,” Coons said. “But to pretend that my religious views shouldn’t influence my attitude and action — I think that’s fiction.”

He called on potential 2020 Democratic White House hopefuls to be honest about their own spiritual influences, noting, “My most basic advice is ‘Don’t hide your faith.’” Even so, Coons warned, “the gospel is not a blueprint for a political agenda (or) a party platform,” and he rebuked a form of Christian nationalism that permeates some corners of American politics.

“Christian nationalism, understood as a view that God created and inspired the United States to be the nation on earth that is meant to be a Christian democracy and to carry forth Christ’s vision for the world … that is in profound tension with our founding as a pluralistic, multifaith, multiethnic, multilingual democracy, which in its founding documents recognizes a creator and recognizes natural rights but expressively declines to create a state religion, and to align … powers of the state with any particular faith,” he said. 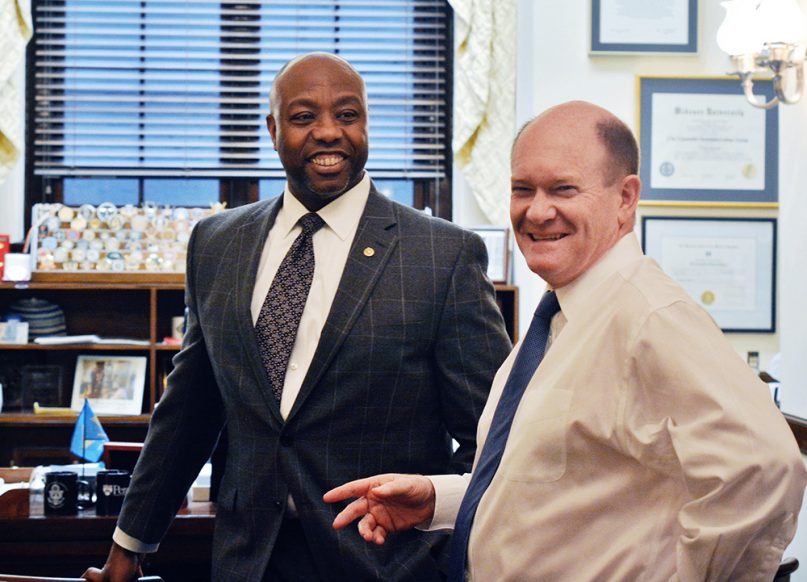 Such rhetoric seems at odds with Coons’ friendly relations with Trump and other Republicans who have pushed an idea of America as a preserve of Christianity. Although he has taken flack from progressive groups such as Indivisible for his relatively centrist approaches to financial deregulation and some immigration issues, Coons maintains a 100 percent rating from the Planned Parenthood Action Fund, repeatedly backed comprehensive LGBT nondiscrimination legislation and consistently opposed Trump’s travel ban on refugees and immigrants from a group of primarily Muslim-majority countries.

Yet Coons has won over so many Republican lawmakers that last year Politico dubbed him “the GOP’s favorite Democrat.” During one of Coons’ interviews with RNS, Sen. Tim Scott, R-S.C., walked into Coons’ office unannounced. Within seconds, Coons began reminiscing about how the two worshipped together during the annual Congressional Civil Rights Pilgrimage.