Pope Prays for Venezuelans and Condemns Corruption as He Visits Panama

Pope Francis insisted Thursday that public officials live simply, honestly and transparently as he opened a visit to a Central American region that has been rife with corruption scandals and is now coping with political upheaval in nearby Venezuela.

Francis didn’t mention the Venezuela crisis during his first remarks in Panama after a meeting with President Juan Carlos Varela at the presidential palace. But his spokesman said he was following the situation closely, was praying for the Venezuelan people and supported “all efforts that help save the population from further suffering.”

Francis stuck to his script in Panama, celebrating the country’s place as bridge between oceans and cultures and holding up the region’s newest saint, slain Salvadoran Archbishop Oscar Romero, as a model for a humble church that accompanies the poor.

He thanked the Panamanian government for “opening the doors of your home” to young pilgrims who have flocked here for World Youth Day, the Catholic Church’s big youth rally and the reason for his visit.

But he warned that those same young people are increasingly demanding that public officials live lives that are coherent with the jobs entrusted to them, and build a “culture of greater transparency” between the public and private sectors.

“They call upon them to live in simplicity and transparency, with a clear sense of responsibility for others and for our world,” Francis said. “To lead a life that demonstrates that public service is a synonym of honesty and justice, and opposed to all forms of corruption.” 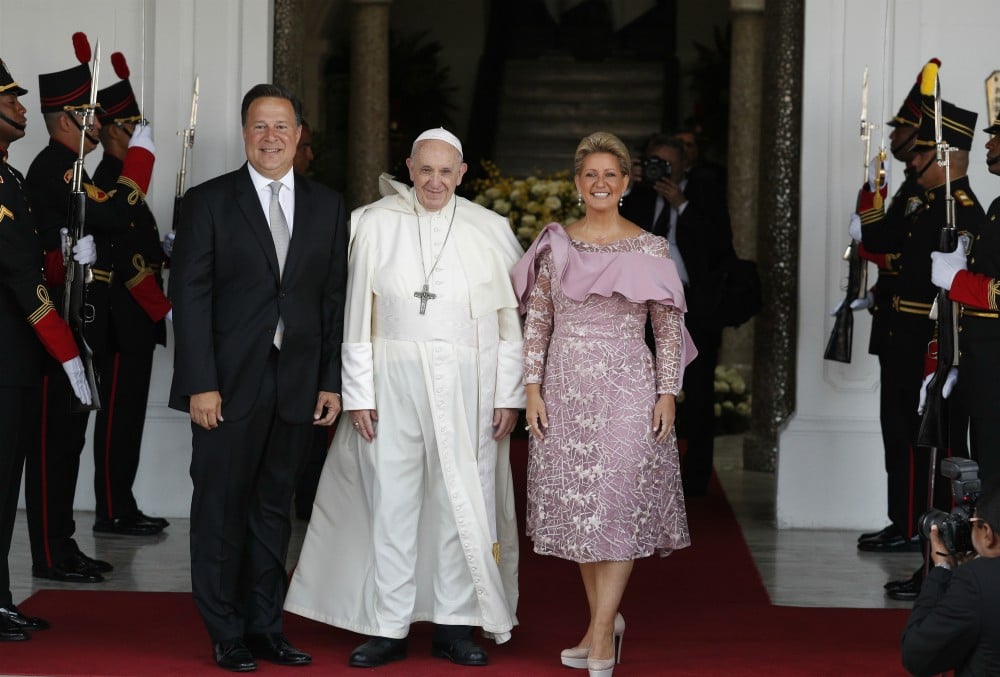 Pope Francis, Panama’s President Juan Carlos Varela and first lady Lorena Castillo pose for a photo at entrance of the presidential palace in Panama City, Thursday, Jan. 24, 2019. Francis opens his first full day Thursday with a visit to the presidential palace and rounds out the day with his evening welcome to tens of thousands of young Catholics gathered for World Youth Day, the church’s big youth rally. (AP Photo/Rebecca Blackwell)

Transparency International estimates that as much as 1 percent of Panama’s GDP, approximately US$600 million, may have been lost to various corruption schemes during the presidency of Ricardo Martinelli, who governed Panama from 2009 to 2014. Martinelli was extradited to Panama last year from the United States to face political espionage and embezzlement charges.

In addition, two of Martinelli’s sons have been detained in the U.S. and are being sought on corruption charges in Panama. They are suspected of receiving more than $50 million in “undue payments” from Brazilian construction giant Odebrecht, which is at the center of one of the largest graft scandals in history.

Odebrecht has acknowledged paying nearly $800 million dollars in bribes in a dozen Latin American nations in return for favors and works contracts.

That includes at least $59 million in Panama, although authorities say the real figure is likely much higher. In addition to the Martinelli sons, the scandal has already implicated former government ministers under the elder Martinelli as well as people linked to the party of the current president, Varela.

The Martinelli family has denied involvement by the sons in the bribery scandal and alleges persecution by political foes. The former president also denies any wrongdoing and says he is being targeted politically.