News of arrests in an alleged terrorist plot to attack their small village has sent “shock waves” through Islamberg, a predominantly black Muslim community in upstate New York, residents say.

Now, members of the beleaguered community say they want real action after learning that four young men had allegedly planned to attack their community with homemade explosives and guns.

“We are in shock. Just imagine waking up and having to tell your children about this plot, that their lives are in danger,” Islamberg Mayor Rashid Clark said in a news conference Wednesday (Jan. 23). “If our families are to be safe, we want all suspects caught and prosecuted to the full extent of the law.”

According to police, the plot to attack Islamberg unraveled when a 16-year-old high school student showed a photo on his phone to friends at Odyssey Academy in Greece, N.Y. Greece is about 200 miles northwest of Islamberg.

“He looks like the next school shooter, doesn’t he?” police say the teen told friends in the cafeteria.

Students reported the comment to authorities, who investigated and found that the 16-year-old was communicating with three other people, identified as fellow Boy Scouts, on the chat service Discord to coordinate an attack.

Together, they had allegedly stockpiled 23 legal firearms and built three homemade bombs using Mason jars, duct tape, black powder and projectiles like BBs and nails, according to police.

Greece police say it was part of a “serious plot” to attack Islamberg, which has been home to about 200 African-American Muslims for nearly 40 years. The 70-acre gated homesteading community, tucked in the western Catskill Mountains, is also the headquarters of The Muslims of America organization.

“If they had carried out this plot, and we have every indication that was what they were going to do, people would have died,” Greece Police Chief Patrick Phelan said in a statement. “The kid who said something saved people’s lives. Everything worked and as a result, nobody’s dead and that’s a good story.”

Police in Greece arrested Brian Colaneri, 20; Vincent Vetromile, 19; and Andrew Crysel, 18, on Saturday, along with the 16-year-old, who is being prosecuted as an adolescent offender. All four are charged with three counts of criminal possession of a weapon and one count of conspiracy. Authorities noted that the investigation is ongoing and that more arrests may be made. 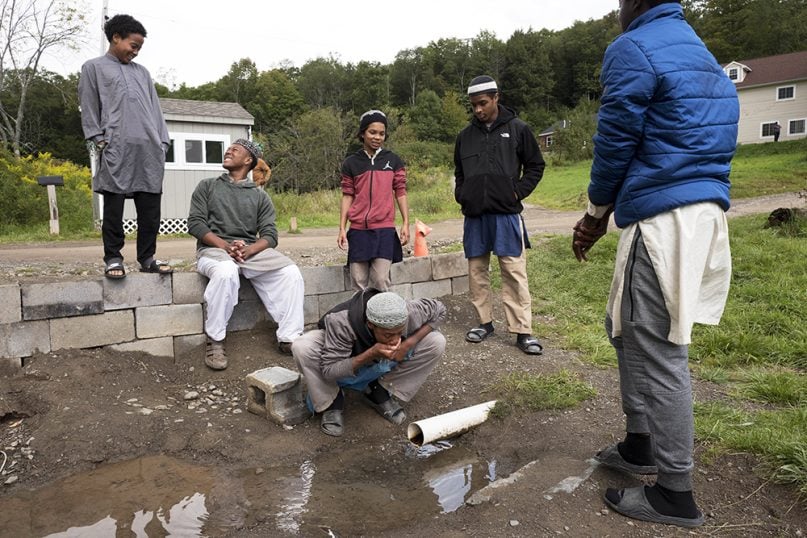 In this Sept. 7, 2017, photo, Muslim schoolboys stop to drink from a pipe carrying well water at Islamberg in Tompkins, N.Y. People in the Muslim enclave in upstate New York say they are frustrated by repeated accusations that their community is a breeding ground for terror. Though police and analysts dismiss those accusations, they have persisted from the time the enclave was settled near the Catskill Mountains in the 1980s. (AP Photo/Mark Lennihan)

New York Gov. Andrew Cuomo said Wednesday that state troopers were increasing patrols around Islamberg “out of an abundance of caution” and that the State Police Hate Crimes Unit would assist in the investigation.

“In New York, we stand with the Muslim community and we will hold those behind this thwarted plot responsible to the full extent of the law,” Cuomo said.

In a statement, Islamberg residents thanked God, law enforcement officials and the high school tipster for thwarting the “heinous plot.” But they say they want more to be done. After all, they say, this isn’t the first time they have narrowly avoided a “would-be massacre” of their community.

For more than a decade, Islamberg has been a focus of right-wing conspiracy theories and has found itself the target of anti-Muslim white supremacist attacks as a result.

In 2017, a Tennessee man named Robert Doggart was sentenced to nearly 20 years in prison for plotting to burn down a mosque, cafeteria and school in Islamberg.

Doggart, a 65-year-old, white, Christian minister who once ran for U.S. Congress, was inspired by claims promoted on Fox News and several right-wing websites that Islamberg was a terrorist training camp. In wiretapped calls, he said he planned to recruit a militia to travel to Islamberg and “carry out an armed attack” that included burning down a mosque or “blowing it up with a Molotov cocktail or other explosive device.” He also said he would be willing to kill children and “cut (residents) to shreds” with a machete.

If carried out, analysts say, it would have been the deadliest attack on U.S. soil since 9/11.