Since the East Coast’s first recreational marijuana shops opened in Massachusetts this past fall, pot fans have snapped up more than $20 million worth of legal weed.

But for many people of faith in the Bay State, legalization hasn’t burned away the moral and health concerns about the use of drugs for fun.

“What sort of a standard do we want to set for marijuana use?” asked Liz Goodman, pastor of Monterey United Church of Christ in Monterey, Mass. “There’s kind of a norm, still, among people who drink alcohol that you don’t drink before 5 o’clock. That’s still kind of a benchmark. But there are no real cultural benchmarks or norms around legal pot use.” 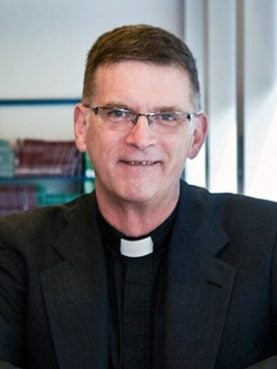 Massachusetts is one of 10 states that have, along with the District of Columbia, legalized small amounts of marijuana for adult recreational use. The door to dope swung open despite opposition from the Roman Catholic Archdiocese of Boston, which poured $850,000 into a last-minute effort to defeat the ballot measure in 2016.

Now that new pot shops are opening each month, Catholics leery of recreational marijuana are taking a more nuanced approach. Those urged to abstain include young adults, whose brains are still developing well into their 20s, and anyone who’s prone to abusing it, according to the Rev. Richard McGowan, a Boston College economist who studies the marijuana industry.

“The problem for the church is going to be: If you say the use of alcohol is all right, then why not marijuana?” McGowan said. “There’s a difference. Alcohol can lead to all kinds of problems, and so can marijuana. So you’re expecting a level of maturity around this substance that, probably, the people who are going to use it don’t have.”

Some Massachusetts evangelicals are still trying to stop new pot shops from opening, only now the fight has gone local. They’re counting on a NIMBY (not in my backyard) dynamic in communities such as Acton, which voted in favor of legalizing marijuana statewide and then barred pot shops from town.

The socially conservative Massachusetts Family Institute is now visiting churches twice a week, up from once per quarter two years ago, according to Director of Community Alliances Mike King. The message is always the same: Demand that your elected officials ban pot shops before they’re out there selling marijuana edibles, which might be packaged like candy but can cause harm, especially when kids get their hands on them. “I’ve got a marijuana sermon all ready for your church,” King said in a podcast posted at the MFI website on Jan. 11. He told Religion News Service that Massachusetts evangelical churches are more eager to hear a call to action around drugs than other issues, including abortion.

Bay State evangelicals have shown they can keep pot shops out of cities where pews are filled with immigrants. Example: In Lawrence, where 40 percent of the population is foreign-born, 120 congregations banded together and helped pressure the City Council to impose a ban. In 20 of the approximately 100 communities that have banned pot shops, King said, MFI was active in mobilizing churches to help make it happen.