For more than two decades, Houston has had competing parades on Martin Luther King Jr. Day, with organizers lobbing allegations of favoritism and conspiracy at each other and at city officials as the groups battled over permits and preferred starting times.

Houston Mayor Sylvester Turner, up for re-election in November, hoped to finally put an end to the dueling events this year in a city where about a quarter of the population is black. But his decision that the city would officially support one parade — the one that also happens to be the nation’s oldest such event honoring King — seems to have brought the rivalry to a new level.

Instead of backing down, organizer Charles Stamps invited two of Turner’s biggest political challengers to join in his MLK Grande Parade, which will take place at the same time and within miles of the city-backed Original MLK Jr. Day Parade.

Even as Stamps moved forward with his plans, Turner dismissed suggestions that divisions remain within the nation’s fourth-largest city over how best to celebrate Martin Luther King Jr. Day. He pointed to city, county and federal officials along with faith-based leaders who have come together behind one parade.

“You have all of that unity that’s taking place and that’s something we all should be very proud of and we should uplift in the spirit of Dr. King,” said Turner, who is black.

Stamps, too, downplayed any divisions. He rejected the idea that his selection of Turner’s rivals as grand marshals was a political swipe at the mayor, though he acknowledged he would like Turner to lose his bid for a second four-year term in November. Stamps said he sees nothing wrong with having two parades and that King would support the idea. 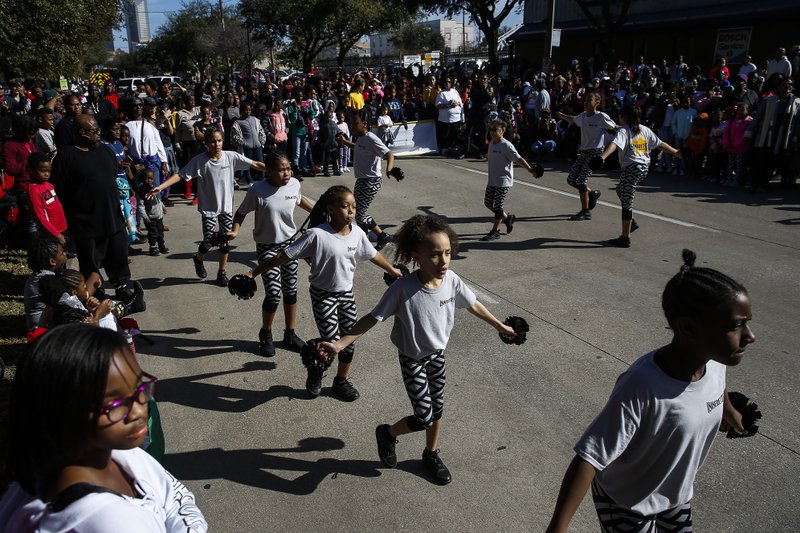 In this Monday, Jan. 15, 2018 photo, the Isiserettes perform during a break in the MLK Grande Parade as emergency crews worked to extinguish a fire along the parade route in Houston. (Michael Ciaglo/Houston Chronicle via AP)

“He would join our parade and say there should be a thousand of these things,” Stamps said.

The first King parade, in 1978, was the brainchild of longtime Houston activist Ovide Duncantell, who died in October. It was held five years before then-President Ronald Reagan signed into law the bill that created the national holiday for King, said Sylvester Brown, the Black Heritage Society’s chief operating officer.

“We’re just exited that we can let our community know that this is the first in the country and they can be proud of the original MLK parade,” Brown said.

Houston’s dueling parades date to 1995. Stamps, a former Black Heritage Society volunteer, believed the original parade was too focused on African-Americans and needed more cultural diversity. Stamps said he started his own event to include additional ethnic groups. 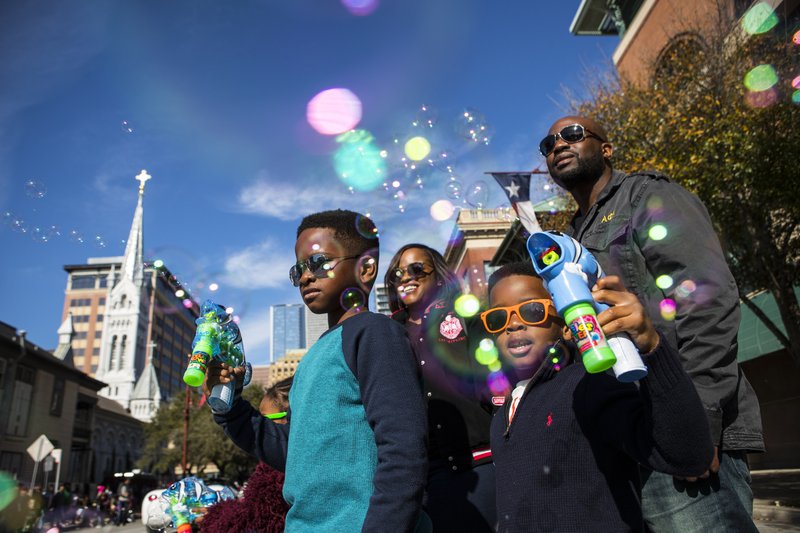 In this Monday, Jan. 15, 2018 photo, Jaylen Chukudebelu, left, and his brother, Cameron, blow bubbles as they watch The “Original” MLK, Jr. Parade with their parents, Khia and Chuk, in front of Minue Maid Park in Houston. (Brett Coomer/Houston Chronicle via AP)

Through the years, both groups have filed various lawsuits over their parades as each group sought to hold its event in downtown Houston at the same time. The city developed various rules for choosing among competing permits, including once even using a coin toss.

In recent years, the city has let both parades take place on the holiday but in different locations. That was the solution this year, as well, though Stamps alleges the city has tried to convince his participants and sponsors to back out of their commitments to his parade. City officials deny Stamps’ allegations.

Turner said it’s been a goal of his for the city to have just one parade, quoting President Abraham Lincoln: “A house divided against itself cannot stand.”

“It’s not easy to come together as one,” Turner said. “If any city can make it happen, we can.”