For most it would bring back terrible memories of the scene from Jaws when the immortal line ‘you’re going to need a bigger boat’ was uttered.

But when a team of divers spotted the largest great white shark on the planet they only hesitated to grab their cameras before they jumped into the sea.

It was drawn to the water around Hawaii for what one diver described as an ‘all you can eat buffet’ – to feed on a dead sperm whale.

Deep Blue was last spotted in Mexico in 2013 where it was fitted with a tracker which is how divers were able to identify it this time.

Ocean Ramsey swimming with Deep Blue in photos shot by Juan Oliphant after it was spotted in the water off Oahu on Sunday by Kimberly Jeffries. Deep Blue became an icon several years ago during Shark Week on the Discovery Channel, through her remarkable size and age. She is 20 feet long and thought to be 50 years old. Pictures show the pair getting remarkably close to the deadly animal 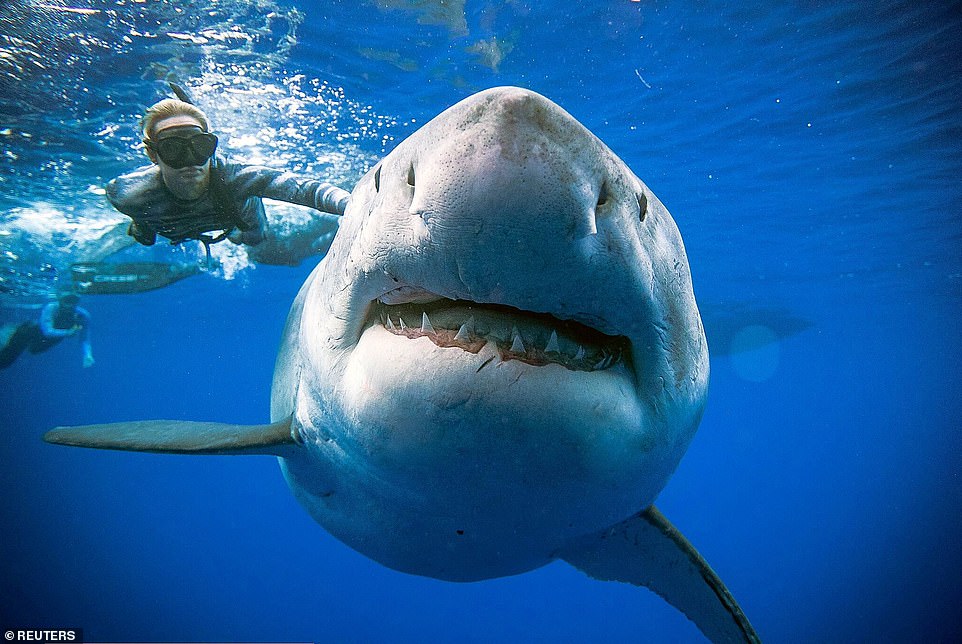 It’s likely that Deep Blue grew so big simply because of her age. Before being spotted in Hawaii, the great white was caught on video in July 2018 near Guadalupe Island, off the west coast of Mexico. It was spotted feeding on the carcass of a whale

Divers could identify her as ‘Deep Blue’ thanks to a tag she was implanted with when she appeared off the coast of Mexico two decades ago. 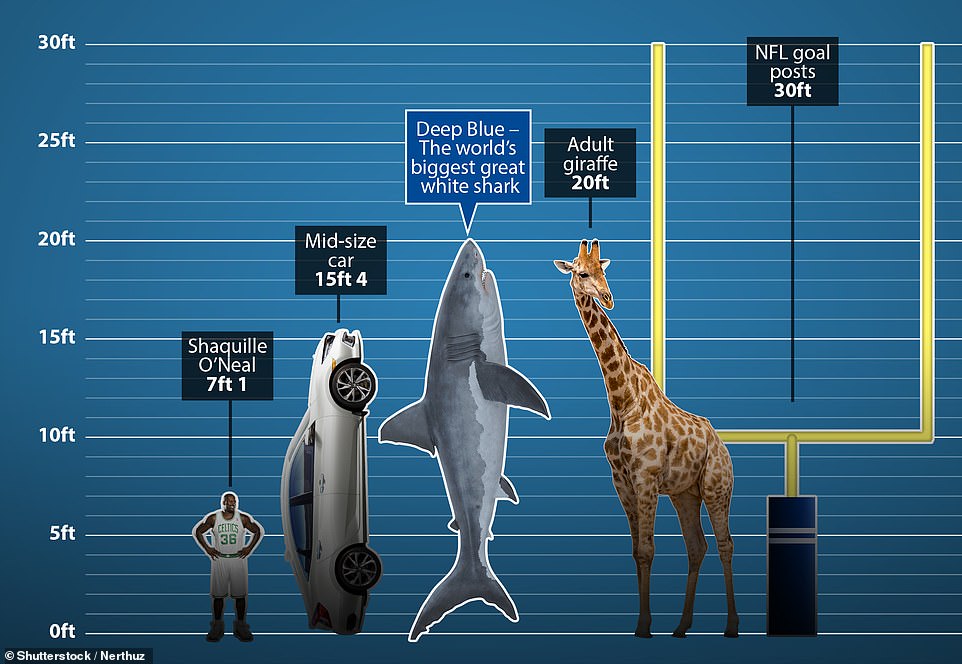 Deep Blue is thought to be around 20ft long according to scientists who have previously encountered the predator, around the same height as a fully-grown giraffe

Remarkable photos shot by Oliphant show him and Ramsey swimming right next to the enormous predator.

Posting on Instagram shortly after the swim, Oliphant wrote: ‘Face to face with the worlds largest great white ever recorded ‘Deep Blue’ with @oceanramsey.

‘I’m still in shock that we spent almost the whole day with this amazing animal in my backyard.

‘I hope my conservation images like this help people to question their perceptions and realize the beauty, and importance of sharks and I hope that they inspire the kind of compassion and connection we need to have with nature and sharks, to help protect them and coexist alongside them.’

Another diver who swam with Deep Blue. Kimberly Jeffries, wrote: ‘If you asked me a few days ago what the most amazing thing I’ve ever seen in Hawaiian waters the answer probably would be pretty different.

‘If you asked me yesterday the answer would be freediving with Deep Blue, a great white, the largest ever documented, who was last seen in 2013 in Mexico.

‘If you asked me right now, it would be freediving with, interacting with and photographing not one but multiple, different great whites AND Deep Blue.’