How Those With Dementia Stay in Touch With Faith

The seven women, most in wheelchairs, sat in a semicircle facing stained-glass windows and an altar topped with a cross and a statuette of Jesus holding a lamb. Underneath the draped table was an ark-shaped container brimming with small stuffed animals.

“Spirit Alive,” a weekly multisensory worship service for people with mid- to late-stage dementia, was about to begin at a United Church of Christ-affiliated skilled nursing center 50 miles north of Philadelphia.

The Rev. Jamie Moyer carried out the day’s theme of creation by leading “He’s Got the Whole World in His Hands,” holding up pictures of colorful flowers and passing out the soft toys, with each woman choosing one to hold.

“God looked at you and said, ‘Oh, I created you, Ruth,” she said to one resident, as she held up a mirror to the woman’s face and went around the semicircle to affirm each person. “‘I love you very, very much.’”

The 45-minute service, held at each of Phoebe Ministries’ four nursing homes, is one example of how faith leaders are moving beyond traditional worship services to provide a spiritual space for people with dementia. Experts say retirement communities and congregations need to incorporate ways of not only caring physically for people with dementia but also helping them to continue to have a quality of life that may include a spiritual dimension. The U.S. Centers for Disease Control and Prevention estimates that more than 5.7 million Americans have Alzheimer’s. Experts predict twice as many Americans 65 and older will have the disease by 2040.

A 2014 review of studies of older adults with dementia found that those involved in spiritual and religious practices had a better quality of life. Phoebe Ministries’ own research has shown that residents with dementia involved with the Spirit Alive program are more engaged during worship and reported feeling closer to God.

The day before Moyer’s specialized sermon on creation, Rabbi Beth Janus pulled out her guitar in a meeting room of an Elkins Park synagogue about an hour away and sang and strummed songs she hoped might spark memories around the table. 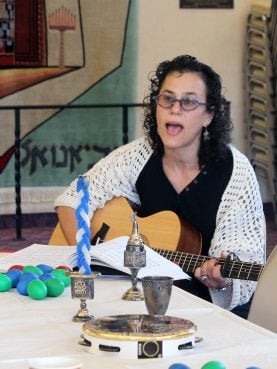 Rabbi Beth Janus sings during the
“Jewish Music for the Mind and Soul”
program at Beth Sholom
Congregation in Elkins Park, Pa.,
on Nov. 4, 2018. RNS photo by
Adelle M. Banks

Joining her for the “Jewish Music for the Mind and Soul” program were a husband with his wife, who had been diagnosed with Alzheimer’s a couple of years before, and another woman with dementia accompanied by her caretaker.

The first woman sang along occasionally with selections that included Hebrew songs, the spiritual “Go Down Moses” and “Sunrise, Sunset” from “Fiddler on the Roof”; she sometimes accompanied Janus’ guitar with a blue egg-shaped shaker. The other woman didn’t open her mouth to sing but watched Janus intently for much of the hour and a half they spent together around a table decorated with a wine glass, a multi-wick candle and other emblems of Havdalah, the ceremony marking the end of Shabbat.

Karen Avart and her accompanying husband, Stewart, are members of the congregation who attended after receiving an email about the Sunday midday program. They looked forward to returning.

“We’ll be back,” she said, adding that she particularly liked the melody of “Shalom Aleichem,” a song of peace traditionally sung by Jews on Friday nights as they start the Sabbath. “It’s nice.”

Her husband added that he enjoyed the gathering, which provides a sense of community beyond synagogue services they occasionally attend.

“If it makes Karen happy, it makes me happy ’cause that’s my primary goal,” he said.