When Archbishop Carlo Maria Viganò wants to get the attention of the pope or his fellow bishops, he sits down and writes a letter.

Then he sends it to Alabama.

At least that’s been the pattern since last summer, when Viganò made headlines worldwide after he called on Pope Francis to resign for allegedly covering up misconduct and abuse by Theodore McCarrick, the former archbishop of Washington, D.C. and a former member of the College of Cardinals. It was the first in a series of letters published by the National Catholic Register, a conservative Catholic publication whose parent company is based near Birmingham.

“Time is running out, but you can confess and repent of your sins, crimes and sacrileges, and do so publicly, since they have themselves become public,” wrote Viganò. “Your eternal salvation is at stake.”

Analysts argue Vigano’s controversial letters — and the international media firestorm they sparked — are a sign of the Register’s growing influence alongside its parent organization, the Eternal Word Television Network, which also owns the Catholic News Agency. EWTN leaders have spent the better part of four decades quietly building a Catholic media empire that spans the globe. 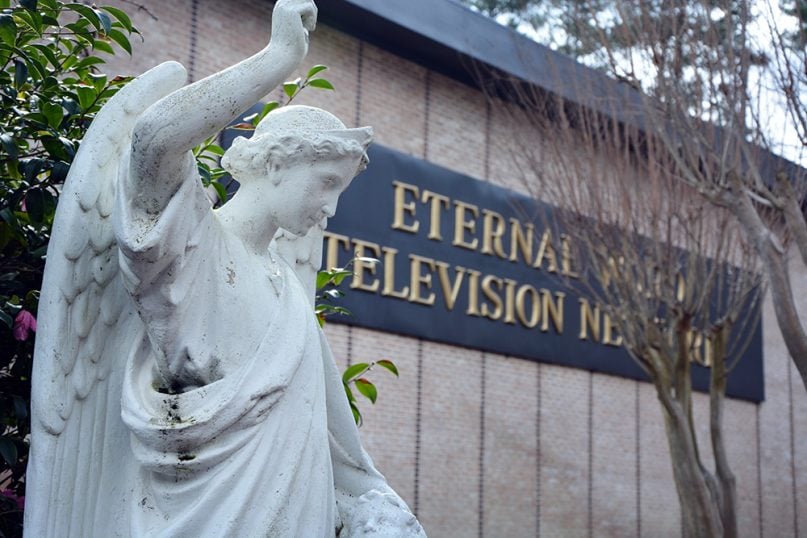 An angel statue at the entrance to the EWTN studios in Irondale, Ala., on Jan. 8, 2019. RNS photo by Jack Jenkins

But the conglomerate, which was founded by a nun, has also drawn waves of scrutiny from cardinals and commentators who argue EWTN uses its profound resources to shore up conservative political and theological positions and attack Pope Francis.

Not that you would know any of this if you pulled up to EWTN’s headquarters in Irondale, Ala.

The unassuming brick buildings that house the organization are tucked away in the small Bible Belt suburb outside Birmingham, where pale, weather-beaten statues of biblical figures dot EWTN’s grounds. The facilities include EWTN’s own in-house sanctuary, where masses are televised and broadcast worldwide every day. The Monastery of the Poor Clare Nuns of Perpetual Adoration and the Shrine of the Most Blessed Sacrament are just a short jaunt away. 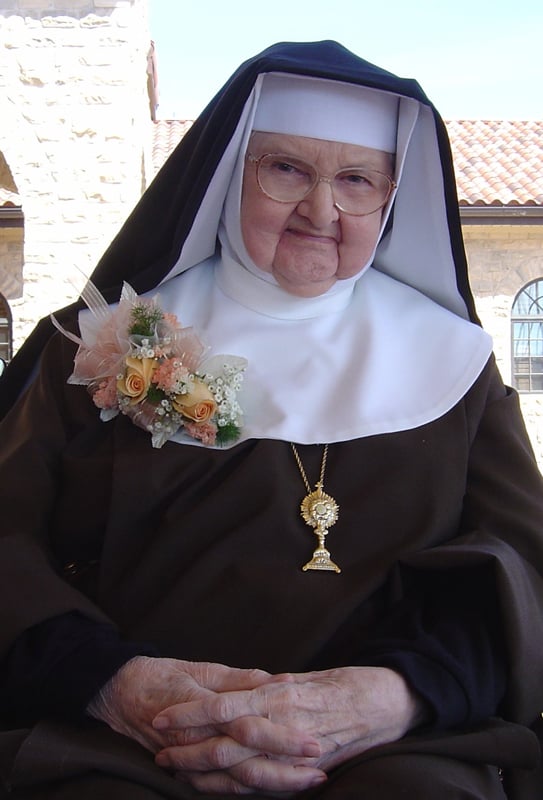 Mother Angelica, the nun who founded
the Eternal Word Television Network
in 1980, died on Easter Sunday (March
27) in 2016. Photo courtesy of Our
Lady of the Angels Monastery

EWTN was founded in 1980 by Mother Angelica, an American Poor Clare nun who was inspired to create her own Catholic television network after visiting a Baptist television station in Chicago, according to a timeline of her life posted on EWTN’s website. Staffers say she also got a helping hand from televangelist Jim Bakker, who sent workers to Alabama to help build EWTN’s first studio.

Staffers are quick to recount the story of how she had only $200 in her pocket when she ordered her first $600,000 satellite dish (a communications staffer said a funder miraculously appeared the day it arrived), or how she would go on to become an international sensation after she began broadcasting her own show.

EWTN staffers say the nun — whose arrival in Alabama triggered attacks and attempted shootings from the anti-Catholic Ku Klux Klan — drew on her faith to dispel any fear of failure.

“One of the things that I learned from (Mother Angelica) was that if you remain faithful and if we execute our mission faithfully and trust in God and God’s providence, then he will provide and you don’t need to be afraid,” EWTN Chairman and CEO Michael Warsaw, whose window overlooks the network’s six white satellite dishes, told Religion News Service.

Warsaw, who joined the network in 1991 and knew Mother Angelica closely until she passed away in 2016, pointed to a ceramic sign on his desk as he spoke, noting he inherited it from Mother Angelica herself: “Be not afraid.” 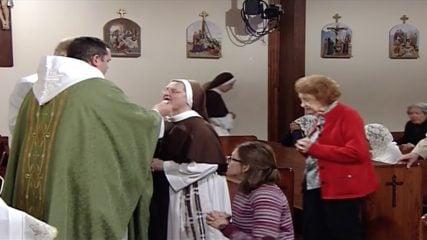 Congregants receive Communion during Mass at the
EWTN sanctuary in Irondale, Ala., in a Jan. 14, 2019,
broadcast. Masses are broadcast daily. Video screenshot

EWTN staffers said reruns of Mother Angelica’s broadcasts are still popular, as are the network’s slate of faith-themed documentaries, talk shows and streams of Vatican events. As employees walked RNS through the compound’s labyrinth of studios and offices, footage of Mother Angelica could still be seen among the array of screens flickering in the station’s various control rooms.

In recent years, however, EWTN has expanded beyond primarily faith-focused lineup and into the news space, hiring television reporters and building studios in places like Washington, D.C. The network now claims one of the coveted stand-up tents next to the White House lawn for live television shots, standing alongside CNN, MSNBC and Fox News. It also acquired other Catholic news outlets, purchasing the National Catholic Register in 2011 and the Catholic News Agency in 2015.

The organization’s reach dwarfs that of almost every other faith-based media company in the United States, rivaling the evangelical Christian Broadcasting Network. Staffers say EWTN alone runs at least 11 around-the-clock networks that are available in 310 million television households across 145 countries, not to mention a sizable radio audience.

Meanwhile, the combined website views for the Register and CNA top out at around 40 million a year.

Their size has proven powerful: Warsaw credited EWTN’s coverage of the March for Life, a massive annual anti-abortion gathering, with helping to raise its profile both in the U.S. and abroad.

Thomas Tweed, director of the Ansari Institute of Global Engagement with Religion at the University of Notre Dame, said the expansion of conservative Catholic media coincides with spikes in polarization.