Lamin Sanneh, D. Willis James Professor of Missions and World Christianity at Yale Divinity School, died unexpectedly from a stroke on Sunday (Jan. 6). He was 76.

In the words of Simeon llesanmi, “An African Academic Elephant has indeed fallen”— meaning that a great individual has died.

Sanneh’s scholarly contributions spanned more than 20 books as author and editor, and over 200 scholarly articles through the course of 40-plus years of academic scholarship on four continents. He represents a particular kind of scholar that is hard to come by in today’s academy: a rigorous polymath who cared about not only the theoretical work of theology and history but the everyday lives of those who believe. 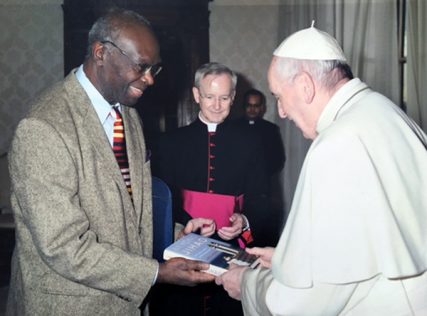 In September 2018, the University of Ghana established the Lamin Sanneh Institute, which will promote scholarly research on religion and society in Africa, emphasizing the areas of Sanneh’s expertise, Islam and Christianity.

Many of us know Sanneh’s work as a pioneer in the field of world Christianity. His writings on African Christianity and Islam in Africa are important works for theologians and religious studies scholars alike. Among his many writings and books, two particularly stand out for their impact on the field of study: “Translating the Message: The Missionary Impact on Culture” and “Whose Religion Is Christianity?: The Gospel Beyond the West.”

In “Translating the Message,” Sanneh upends the argument that Christianity — as a missionary religion — wipes out the cultures it enters. Rather, Sanneh asserts that Christianity is unique as a missionary religion because it is translated without the language of the founder (Jesus) and invests itself in every language by forsaking the language of Jesus (Aramaic). Christianity is, according to Sanneh, a preserver rather than a destroyer of indigenous languages and cultures. In “Whose Religion Is Christianity,” Sanneh answers questions about Christianity not from a Western perspective, but from the perspective of, as he puts it, “the movement of Christianity in societies that were previously not Christian and societies that had no bureaucratic tradition in which to domesticate the gospel.”

None of those fit, Sanneh told Dale Irvin, president of New York Theological Seminary, in an email. Christians outside the West had an equal claim to the word “Christianity.” They are not from a different faith.

“(T)he fight about what name to give to the subject is really a fight of the west and its surrogates to contest the right of Christians elsewhere to consider themselves as equals in the religion,” he wrote. “The countermove with the inclusive title ‘World Christianity’ is intended to force a reckoning with ‘tribal’ view of the west.”

For myself and many other students and scholars, this emphasis on world Christianity opened the doors to scholarship that was not simply focused on Western ideas and theologies. It opened the doors to new ways of thinking about the historical and present-day impact of Christianity in cultures around the world, as well as Islam and other indigenous religions.