R. Kelly’s back-up singer saw him having sex with 15-year-old Aaliyah, a new documentary has claimed.

In Lifetime’s upcoming Surviving R. Kelly, which airs Thursday, Jovante Cunningham claims to have witnessed the then 27-year-old commit statutory rape on the teen.

‘We were out on the road with Aaliyah,’ she said, as reported by People. ‘On a tour bus, there really aren’t many confined spaces. When you get on the bus there are bunks and so these bunks have little curtains you can pull at night if you don’t want anybody to see you sleeping.’

‘So it just so happened we were all laying in our bunks and the curtains are open, everybody’s communicating, laughing, when the [room] door flew open on the bus,’ she recalled. ‘Robert was having sex with Aaliyah.’

When asked what she saw, Cunningham replied: ‘Things that an adult should not be doing with a child.

‘I can’t stress to you how people are still suffering behind things that went on 20 years ago.’

That same year, 1994, it was widely reported Kelly and Aaliyah had secretly married, though they both denied it.

A subsequently unearthed marriage certificate listed his 15-year-old protegee’s age as 18; her parents had it annulled the following year.

Aaliyah met Kelly though Barry Hankerson, her uncle and his manager.

‘Aaliyah [was] very tom-boyish, glasses, braces, no swag,’ Cunningham said of meeting the the then-12-year-old.

‘She truly was a beautiful young lady. We used to sneak Aaliyah out of the hotel room and take her all over the place. Those were the good old days,’ she said, adding: ‘but those are the things that also make you cry.’

Kelly went on to become her mentor, as well as lead songwriter and producer of her double platinum debut album, the uncomfortably titled Age Ain’t Nothing but a Number.

Aaliyah cut ties with Kelly after the accusations of illegal marriage; she died in a plane crash in 2002 shortly after filming a music video in the Bahamas, aged just 22.

The eye-opening six-part docu-series interviews dozens of former friends, family members and colleagues, who all make grim claims about the singer abusing women and young girls.

A private preview screening of the documentary held in New York earlier this month had to be evacuated following a number of bomb threats.

Last year several women came forward claiming Kelly had been running a sex cult, and in May of this year a woman filed a lawsuit against him claiming that he had treated her like a sex slave. 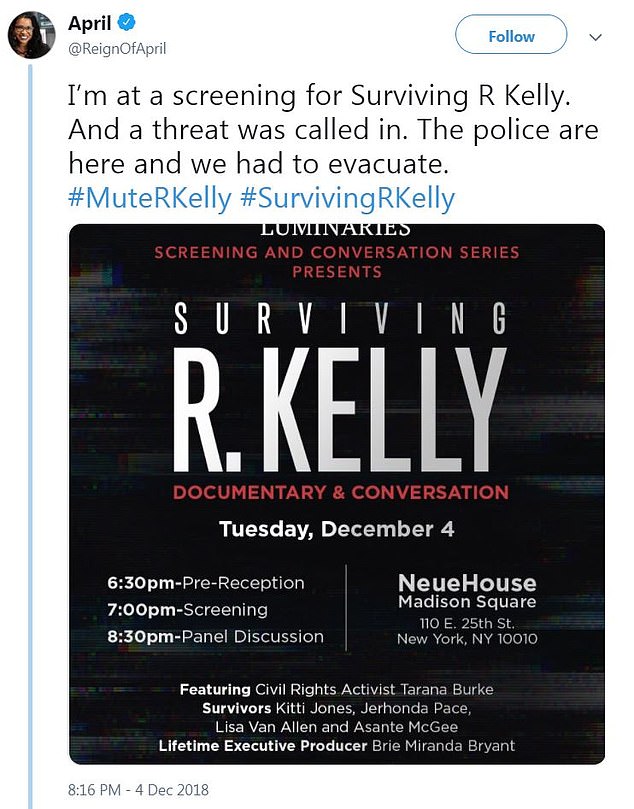 Timing: A private preview screening of the documentary held in New York earlier this month had to be evacuated following a number of bomb threats