Revelry & Reflection Mark Transition to the New Year Across the Globe

Fireworks, concerts, spiritual services and political addresses abounded to mark the transition to 2019 as revelers around the globe bid farewell Monday to a year filled with challenges to many of the world’s most basic institutions, including political, trade and religious ones.

A look at how people around the world are ushering in 2019:

Britons ushered in the new year with the familiar chimes of Big Ben, even though the world famous clock has been disconnected for more than a year because of a conservation project. 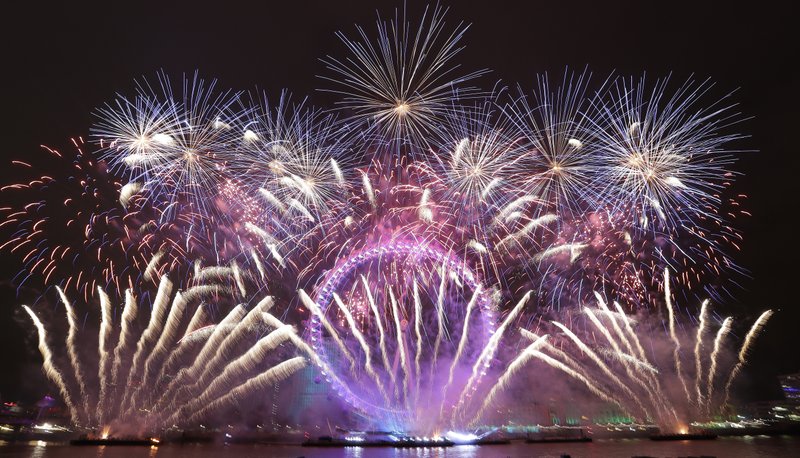 Parliament announced last week that the clock’s massive bell would sound to mark the new year with the help of a specially built electric mechanism to power the hammer, which weighs about 440 pounds (200 kilograms). The clock mechanism, which has kept time since 1859, has been dismantled as part of the renovation work.

New Year’s Eve without Big Ben would be positively un-British. The comforting chimes are used by TV and radio stations throughout Britain to herald the moment of transition from the old to the new year.

The focal point of London’s usually rowdy celebrations was fireworks display on the Victoria Embankment at the side of the River Thames. Police warned people without a ticket for the sold-out event to make other celebration plans. 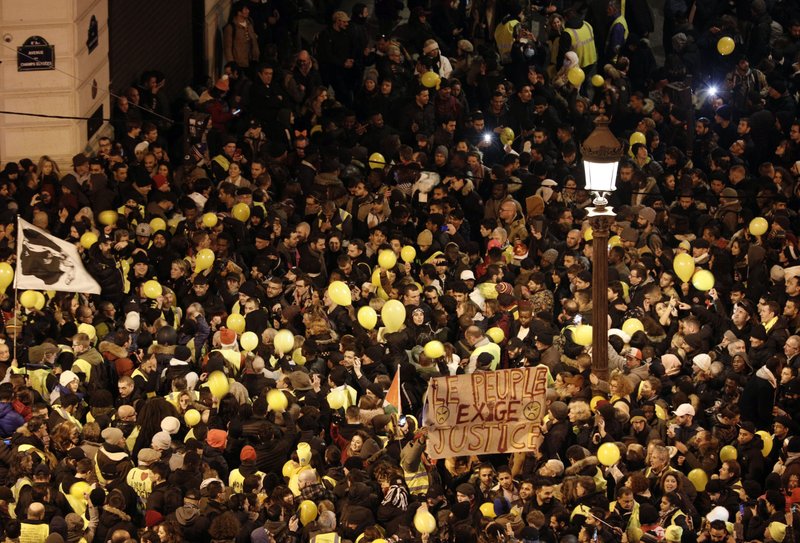 Parisians and tourists gathered on the Champs-Elysees to celebrate New Year’s Eve under heavy security.

Anti-government protesters from the yellow vest movement have issued calls on social media for “festive” demonstrations on the famous avenue.

Paris police set up a security perimeter in the area, with bag searches, a ban on alcohol and traffic restrictions. The Interior Ministry said Sunday that the heavy security measures are needed because of a “high terrorist threat” and concerns about “non-declared protests.”

President Emmanuel Macron gave his traditional New Year address to briefly lay out his priorities for 2019, as some protesters angry over high taxes and his pro-business policies plan to continue their demonstrations in coming weeks.

Ahead of midnight, a light show illustrating the theme of brotherhood took place on the Arc de Triomphe monument at the top of the Champs-Elysees. 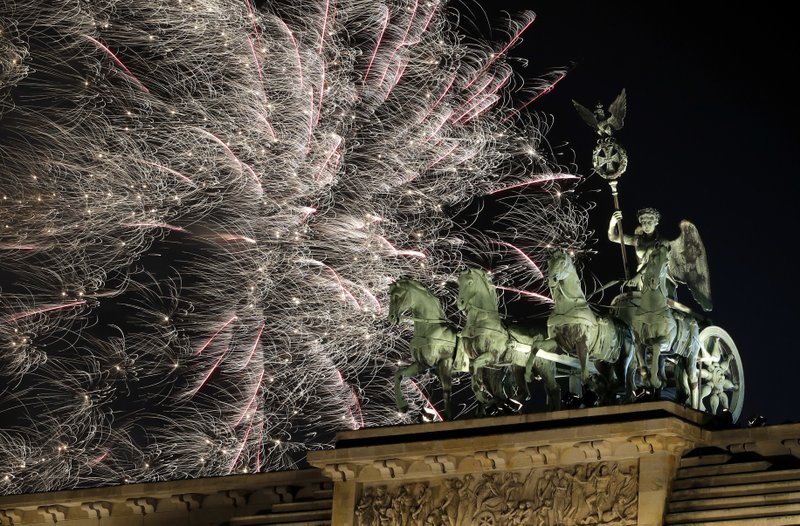 Fireworks light the sky above the Quadriga at the Brandenburg Gate shortly after midnight in Berlin. (AP Photo/Michael Sohn)

Tens of thousands of people celebrated the start of 2019 at Berlin’s landmark Brandenburg Gate.

The annual New Year’s celebrations took place amid tight security, with about 1,300 officers deployed throughout the heart of the German capital and revelers banned from taking fireworks, bottles or large bags into the fenced-off party zone. 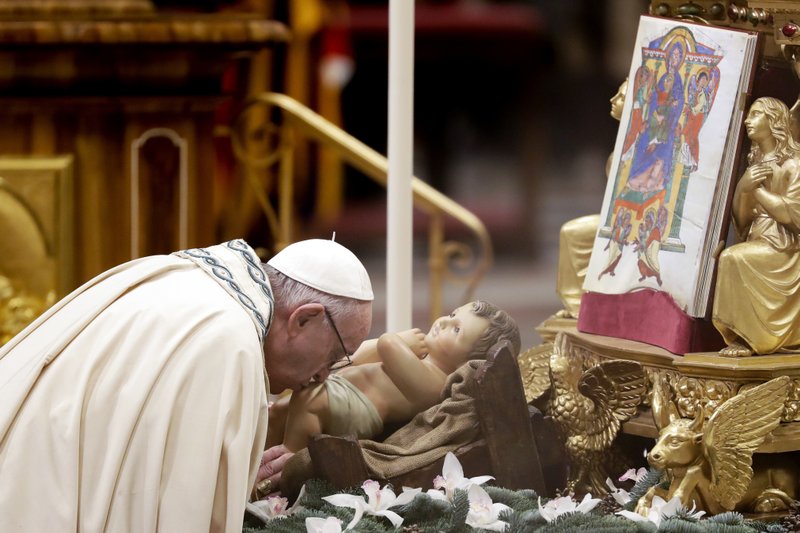 Pope Francis has rounded out the most problematic year of his papacy by presiding over a vespers service and praying before the Vatican’s giant sand sculpture Nativity scene.

During his homily Monday, Francis lamented how many people spent 2018 living on the edge of dignity, homeless or forced into modern forms of slavery. Francis noted that Rome alone counts some 10,000 homeless and said: “During the winter their situation is particularly hard.”

Accompanied by his chief alms-giver, Francis then walked out into St. Peter’s Square, where he greeted pilgrims and prayed before the Nativity scene, carved out of 720 tons of packed sand.

On Tuesday, Francis will celebrate Mass to mark the start of a new year and officially leave behind 2018, which saw a new eruption of the clergy sex abuse scandal.

Fireworks crackled at Dubai’s Burj Khalifa, the world’s tallest building, as hundreds of thousands of spectators gathered downtown to watch the spectacular display.

The fireworks replaced last year’s somewhat anticlimactic LED lightshow that ran down the facade of the 828-meter-tall (2,716-foot-tall) tower.

Cafes and restaurants with a view of the Burj Khalifa charge a premium for their locale on New Year’s Eve. Casual sandwich chain Pret a Manger, for example, charged $817 for a table of four. That price gets you hot and cold drinks and some canapes. For burgers near the action, fast food chain Five Guys charged $408 per person for unlimited burgers, hotdogs, fries, milkshakes and soda.

Elsewhere in the United Arab Emirates, the emirate of Ras al-Khaimah attempted to set a new Guinness World Record with the longest straight-line display of fireworks reaching 7.35 miles (11.83 kilometers).

While many celebrate New Year’s Eve with fireworks, hundreds of Thais traveled to Takien Temple in a suburb of Bangkok to lie inside coffins for traditional funeral rituals. 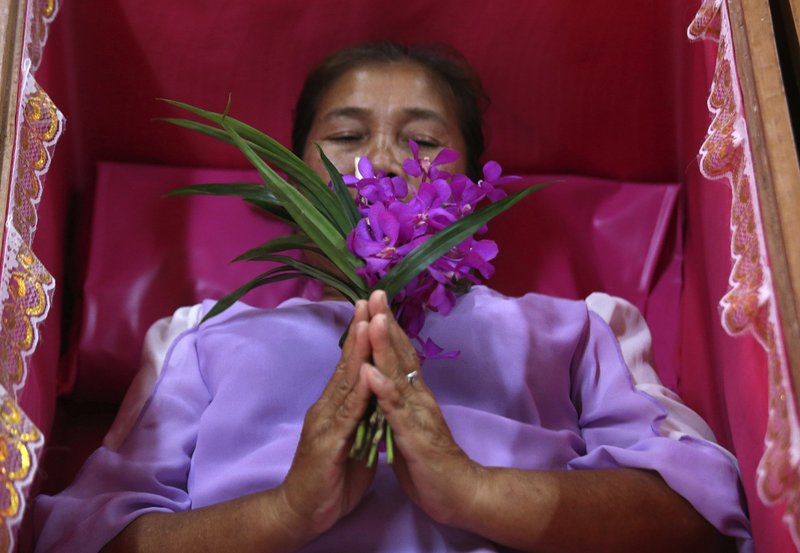 Participants believe the ceremony — symbolizing death and rebirth — helps rid them of bad luck and allows them to be born again for a fresh start in the new year.

They held flowers and incense in their hands as monks covered them with pink sheets and chanted prayers for the dead.

“It wasn’t scary or anything. It is our belief that it will help us get rid of bad luck and bring good fortune to our life,” said Busaba Yookong, who came to the temple with her family. 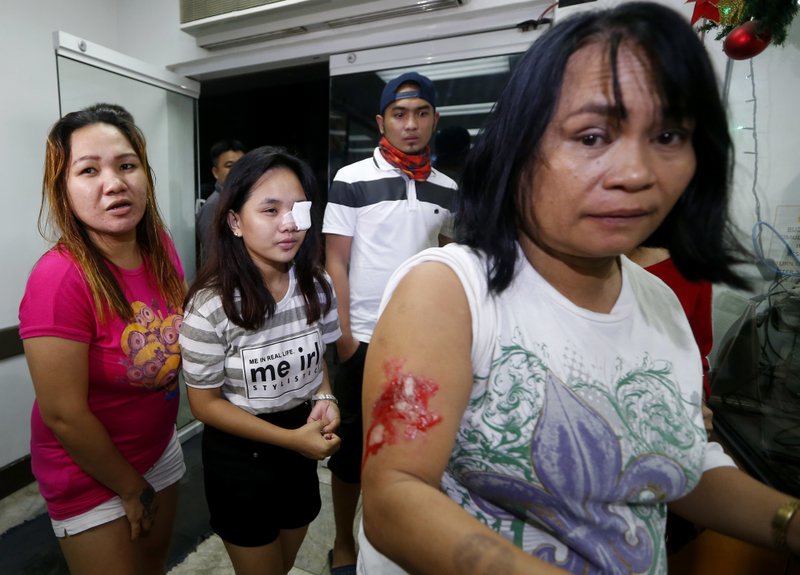 Revelers walk into a hospital after being injured during a raucous celebration in Manila, Philippines. (AP Photo/Bullit Marquez)

Dozens of people have been injured ahead of New Year’s Eve, when many across the Philippines set off powerful firecrackers in one of Asia’s most violent celebrations despite a government scare campaign and threats of arrests.

The Department of Health said it has recorded more than 50 firecracker injuries in the past 10 days. That is expected to increase as Filipinos usher in 2019.

The notorious tradition, worsened by celebratory gunfire, stems from a Chinese-influenced belief that noise drives away evil and misfortune.

Earlier Monday, suspected Muslim militants remotely detonated a bomb near the entrance of a mall in Cotabato as people did last-minute shopping ahead of celebrations. Officials said at least two people were killed and nearly 30 wounded. 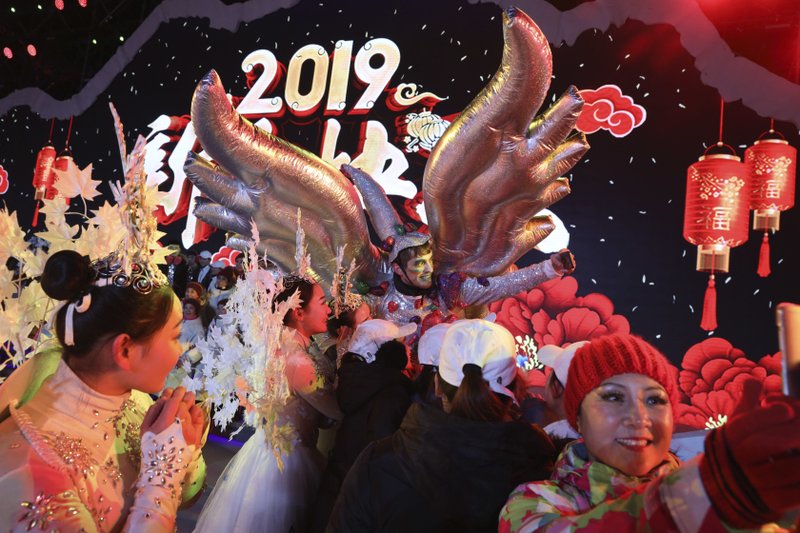 Performers take selfies at the end of a countdown in Beijing. (AP Photo/Ng Han Guan)

New Year’s Eve isn’t celebrated widely in mainland China, where the lunar New Year in February is a more important holiday. But countdown events were held in major cities, and some of the faithful headed to Buddhist temples for bell-ringing and prayers.

Beijing held a gala with VIP guests at the main site of the 2008 Summer Olympics. The event looked ahead to the 2022 Winter Games, which also will be held in the Chinese capital.

Outdoor revelers in Beijing had to brave temperatures well below freezing.

Additional police were deployed in parts of Shanghai, where a New Year’s Eve stampede in 2014 killed 36 people.

In Hong Kong, festive lights on skyscrapers provided the backdrop for a fireworks, music and light show over Victoria Harbor on a chilly evening.

The Pacific island nation of Kiribati was the first in the world to welcome the new year, greeting 2019 with muted celebrations after spending 2018 on the front line of the battle against climate change.

Kiribati is made up of low-lying atolls along the equator which intersect three time zones, the first of which sees the new year 14 hours before midnight in London.

Much of the nation’s land mass, occupied by 110,000 people, is endangered by rising seas that have inundated coastal villages. The rising oceans have turned fresh water sources brackish, imperiling communities and raising doubts the nation will exist at the next New Year.

Former President Anote Tong said the only future for Kiribati may be mass migration.

The new year was welcomed in the capital, Tarawa, with church services and mostly quiet private celebrations. 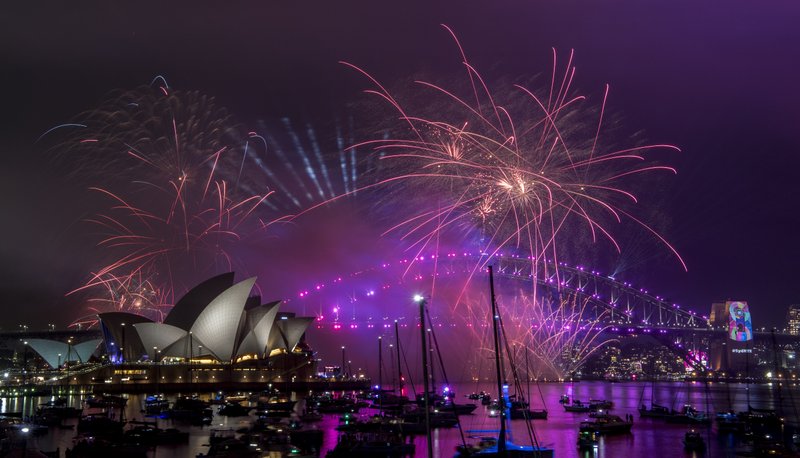 One of the most complex displays in Australia’s history included gold, purple and silver fireworks pulsating to the tune of ”(You Make Me Feel Like) A Natural Woman,” made famous by Aretha Franklin, who died in August. The show used 8.5 tons of fireworks and featured more than 100,000 pyrotechnic effects.

Earlier, a thunderstorm drenched tens of thousands of people as they gathered for the traditional display, creating a show of its own with dozens of lightning strikes.

In Melbourne, 14 tons of fireworks deployed on the ground and on roofs of 22 buildings produced special effects including flying dragons. In Brisbane, people watched as fireworks exploded from five barges moored on the Brisbane River. 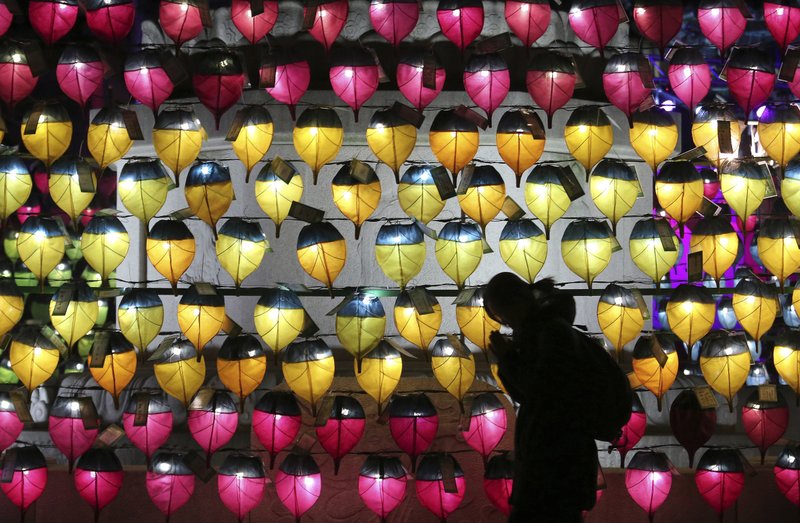 After an eventful year that saw three inter-Korean summits and the easing of tensions over North Korea’s nuclear program, South Koreans entered 2019 with hopes that the hard-won detente will expand into a stable peace.

Thousands of South Koreans filled the streets of the capital, Seoul, for a traditional bell-tolling ceremony near City Hall. Dignitaries picked to ring the old Bosingak bell at midnight included famous surgeon Lee Guk-jong, who successfully operated on a North Korean soldier who escaped to South Korea in 2017 in a hail of bullets fired by his comrades.

A “peace bell” was tolled at Imjingak, a pavilion near the border with North Korea. 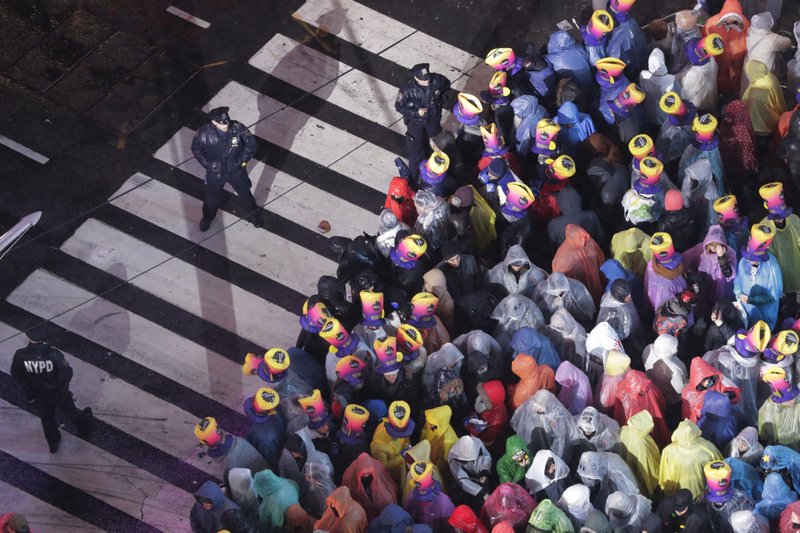 Snoop Dogg, Sting and Christina Aguilera will welcome 2019 in a packed Times Square along with revelers from around the world who come to see the traditional crystal ball drop.

A drenching rain hasn’t stopped crowds from packing the area ahead of the made-for-TV extravaganza.

The celebration will take place under tight security, with partygoers checked for weapons and then herded into pens, ringed by metal barricades, where they wait for the stroke of midnight.

But the weather forced police to scrap plans to fly a drone to help keep watch over the crowd.

Partygoers were paying up to $10 for plastic ponchos trying to stay dry. Umbrellas are banned for security reasons.

No place does flashy like Las Vegas. It will ring in 2019 with fireworks shot from casino-resorts and superstar performances from Lady Gaga, Celine Dion, Gwen Stefani and others.

Celebratory midnight toasts will be anchored by an 8-minute firework show on the Las Vegas Strip. The pyrotechnics will be choreographed to a soundtrack that includes Frank Sinatra’s “Luck Be a Lady,” Lionel Richie’s “All Night Long” and Dion’s version of “I Drove All Night”.

Live performances will be held on outdoor stages, and big-name performers will carry on the celebrations inside casino venues.

New Year’s Eve is worth more than $400 million to Vegas.

Security is a high priority for police on the Las Vegas Strip, where a gunman in 2017 opened fire on a country music festival, killing 58 people and injuring hundreds of others.

Police, including rooftop snipers and plainclothes and uniformed officers, will be out in full force along with federal agents. Authorities are also restricting revelers from bringing backpacks, ice chests, strollers and glass items to the street celebrations.